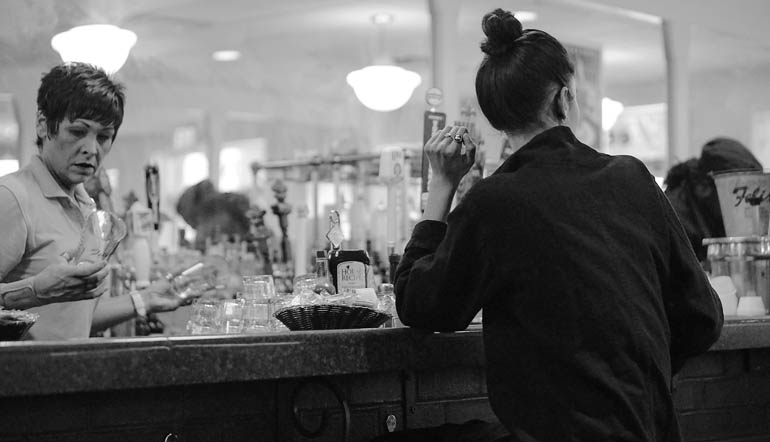 Having grown up feeling starved for complex female antiheroes in fiction, women I could actually fully relate to without having to overhaul my personality, morality, or entire appearance, the recent influx of interesting, complex female characters in popular culture has been revelatory. Strangely, though, in my recent reading, it’s a heroine from a 1962 hit by the brilliant Elaine Dundy that most powerfully captured my imagination and that I feel merits a revisit, or a new discovery.

Betsy Lou Saegessor (going by the name Honey Flood) is the marvelously flaky, darkly stubborn, witty, and vivid heroine of The Old Man and Me, Dundy’s second novel. An American girl who “hates everything English,” she careens her way through London of the early ’60s with hectic energy, on a mission to find, seduce, and kill C.D. McKee, the wealthy, cantankerous old man of the title.

Ostensibly, Betsy Lou’s mission is bracingly simple, to get back what’s hers, a mission so satisfyingly amoral that it’s rarely given to female protagonists, but rather to every rock-jawed action-revenge hero ever. She proceeds to snark, flatter, faff, and fake her way into the upper echelons of his circle, finding her initial hatred tempered with feelings more complicated but no less relateable in the process. As for C.D., he’s a privileged, hilarious, rude, canny old man that manages to charm both the reader and Betsy Lou.

To watch her resolve waver, her backstory unfold, and her clumsy but deadly earnest mission come to its surprise ending, you are amazed by the utter earnestness and sincerity of her depiction. She’s simply become too real not to be a powerful character, and her bristling wit sweeps you along into her dizzy orbit, keeping the back-and-forth game between player and played zippy and almost Nabokovian in its dextrous hilarity:

Look: all I’m trying to say is that there comes a crucial moment in a relationship in which one person is moving towards the other—passing from stranger to acquaintance to something else—when (to be precisely Précieuse for the moment and get out Mademoiselle Scudéry’s Carte de Tendre that I used to study in French class) when one must make the perilous journey from, let us say, the Ville de la Curiosité to the Ville de la Compassion without falling into the Lac d’Indifférence, and C.D. made it via the tale I spun.

One of the most refreshing parts of feminism starting to take an overt and central role in popular culture and discourse is the growing abundance of complex women’s stories, undoing archetypes of female victimhood and empowerment, innocence and guilt. Betsy Lou is often a decidedly awful person: she lies wildly, her initial motives are childlike in their selfishness, and she uses everyone from C.D. to her pathetic roommate Dody to get her way. At the same time, this awfulness is entirely human, and in fact, very much a part of growing up, somehow. It’s a teenager’s awfulness, and the awfulness of our early twenties, when we should know better but often don’t, and blunder our way through faking it till we make it.

What’s more, it’s awfulness grounded in context: Dody is a bore, and a bit of a doormat. C.D. is a bit of an ass, and quite a bit of a pompous sleaze bag. You’re rooting for her to both somehow get her way, and not murder the poor guy the whole time, and the give and take, the banter, the wild vagaries of attraction and repulsion, savviness and blunder, are riveting in their realism.

Most of that realism is due to the fact that half the time you’re not entirely convinced she wants to do the deed. She hems and haws, not out of any supposedly feminine frailty, but because she’s tired, and she’s a bit lonely, and the guy isn’t all bad, and killing someone is a hellishly headache-inducing endeavor in the best of circumstances. But just as often as she seems poised to give up the whole thing and go get drunk somewhere, you’re also convinced she’ll off him in a fit of rage, or out of sheer exasperation in wanting to have the thing over and done with.

In her introduction, Dundy calls her a “Bad Girl,” an “Angry Young Woman,” “operating on a short fuse.” But in a way this does a bit of a disservice to her. As the novel unfolds, the depths of her own motivations, and what keeps her from carrying out those motivations, gain richness, clarity, and life.

For all her Holly Golightly-esque frippery and fun, she is also just a genuinely wounded, ordinary person, right at the age in life when everything looms largest, when one’s powers are at their most volatile and feverish. In her own words, “I was wacky. I was cracking up, but I’ll never be the same again as in that litmus-paper state where if you held my hand in yours for a minute your imprint was on me for ever, where my shadow permanently stained the wall, where the air was real and active, tactile, writing all around me.”

She’s no manic pixie dream girl, she’s too canny for that, but nor is she the femme fatale, the broken bird, or any of the other cheapened archetypes we’ve often been given under the label “interesting/strong female character.” She’s just a human being, occasionally a bit of a ditz, occasionally quite awful, callous, selfish, bored, plain mean. But a feeling, furious person having to grow up, and take account, and come to some sort of peace with herself.

Joan Didion’s magnificent Vogue essay, “On Self-Respect,” published just one year before Dundy’s The Old Man and Me, speaks about Jordan Baker in The Great Gatsby as having immense self-respect. “With that genius for accommodation more often seen in women than in men, Jordan took her own measure, made her own peace, avoided threats to that peace: ‘I hate careless people,’ she told Nick Carraway. ‘It takes two to make an accident.’ Like Jordan Baker, people with self-respect have the courage of their mistakes. They know the price of things.”

On finishing The Old Man and Me, with its stunning and unexpected conclusion, you find yourself seeing not only Betsy Lou confronted with this test of self-respect, but an understanding of how that is one of the milestones of growing up, of becoming someone in the world. Throughout her misadventures, there’s something of our own adolescent callousness and mistakes at work there, and at the end of it, you realize it’s all part and parcel of making a life, and a personhood, from what we have, and what we’ve done. She goes from the zipline of her observations, all razor-sharp and setting off sparks, to the open-eyed, sobered understanding, “We both sat stock still, rocked back on our heels in our astonishment for we knew I had spoken the truth from the innocence of my heart and its ramifications stunned us.”

Betsy Lou is one of the most bracingly real female characters in fiction to me because she’s allowed to blunder so much, so humanly, and at the end of it, you have an inkling she’s on the verge of passing Didion’s test. It’s in the way she tells her own story, in the way she takes her own measure, bewildering herself with what she finds. And in a climate where so much is heaped on the female lead, so many archetypes and expectations: of victim or savior or simply “strong female character,” to find one so utterly human, so flawed and dangerous and gutsy and silly, too awkwardly herself to fit into any one trope, and too canny to allow you to try, is a quiet, revolutionary breath of fresh air.

Tags:Elaine Dundy, The Old Man and Me