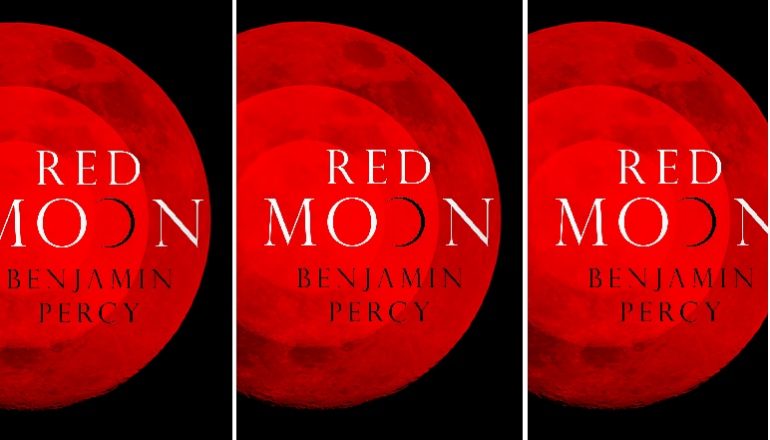 Today’s novelist is Benjamin Percy, the author of two story collections as well as two novels, The Wilding and Red Moon.

How long did it take you to write each of your novels?

That’s hard to track, because I never work on any one project exclusively. I’ll take a break from the novel to work on a screenplay, a short story, an article or essay, sometimes for a few days, sometimes for a few months, however long it takes for me to feel renewed and ready to tackle the monster again.

I was twenty-eight when I sold my first novel, The Wilding, but it had a lengthy editorial road ahead of it since the original first-person narrative was more shnovel than novel. I set it aside for a long time before bullying it into shape, in part because I moved from Wisconsin to Iowa and was distracted by a new job and an old house that required a lot of renovation, and in part because the revision seemed so daunting. That makes for two years total? Maybe more a little more than that.

Red Moon was also spaced out weirdly. I wrote sixty-five pages and an outline at the start of the summer of 2010, and I started cranking out the pages in November. I worked steadily for a solid year—I had to, because they had a strict deadline. I was hammering eight to ten hours a day and within a year, I had seven hundred pages. This manuscript went through a brutal overhaul. I threw out hundreds of pages and added hundreds more. The book was considered complete and satisfactory in March of 2012. So what does that add up to? A year and half?

So, at the “One Year In” point— as compared to its published form— you’d say that Red Moon was like…

Ore that required a lot of refining.

Actually, I wrote my first “novel” at twenty-two, then cranked out three more, all of them failures. I was successfully publishing short stories at this time, and I put out two collections, but could not conquer the long form.

From each of those four failed novels, I learned something, but the fundamental differences between the short and long form escaped me until I wrote my first published novel, The Wilding. I was teaching a novel-writing course at the time, and I think that has a lot to do with me finally figuring out the form. I felt incredibly insecure, teaching a class on novel-writing when I had never published one, so I read up every craft book I could secure and read novels I admired over and over and diagrammed them to figure out what made them tick.

I also played off my strengths as a short story writer. The Wilding has a small stage (most of the action takes place in one location), small time frame (one weekend), and a small cast (three central characters).

Then, you blew up the “small stage” in your second novel, Red Moon—in fact, you created a whole new world.

I’ve always loved big books. T.H. White’s The Once and Future King, Stephen King’s The Stand, Susanna Clarke’s Jonathan Strange and Mr. Norrell, Tolkien’s The Lord of the Rings. There’s something so transporting about the epic—you truly feel you’ve snuck another life into yours.

I wanted to accomplish the same with Red Moon—to write a sweeping narrative that took place over many years, with many characters, in many locations, but still managed to be compulsively readable, the chapters like a hail of silver bullets. So once again I studied up, reading and diagramming novels I admired that fit the same mold. Reading slowly, intentionally, and strenuously has been essential to my growth as both a short story writer and novelist.

You create complex maps during the writing process. Do you use pen or chalk or pencils? Do you swear loyalty to the map, or do you allow your work some leeway?

I usually think about a novel for a year before I begin writing it. That makes the process of composing much swifter. I begin with some notion of the premise—the hook to hang the narrative on—and then, on a scroll I hang from my office wall, I begin sketching out characters, figuring out their histories and desires. This is the left-hand margin. From there I set obstacles in the way of their desires, the first stirrings of plot, and these threads reach across the scroll and eventually tangle.

Once I have the plot worked out, I stand back and pinpoint the set-pieces, the emotional gateways, the spikes and dips in action, so that I might arrange the story to best orchestrate suspense.

Yes, of course, this is all written in pencil because so much will change. And I haven’t figured everything out—that wouldn’t be any fun—just the general constellation.

Does this kind of mapping work with other projects?

I know this sounds ridiculous, but I’m currently working on three novels, a book of craft essays, three screenplays and a television series. I have scrolls up on my wall for each of them—so that I can keep it all straight—and I clearly designate days (or times of day) to commit to each, so that my head isn’t muddled.

I didn’t used to, but I thankfully have more time to commit to writing than I ever did before. My kids are getting older (so they’re in school eight hours a day) and my teaching load is no longer as brutal as before (years ago, I was sleeping five hours a night when teaching a 4/4 load in order to write). So I have much more imaginative time and energy.

Sherlock Holmes calls his this space his “mind palace.” Mine used to be a splintery treehouse shoddily hammered together. Now I have a few more rooms and parlors available to explore.

How do you conduct research for your novels?

Every story I write, whether short or long, is a research project. This is one of the pleasures of being a writer—being a constant student—getting to explore books and articles and websites, getting to visit a morgue or post office or laboratory, getting to interview taxidermists and FBI agents and bodybuilders and politicians. I love being a writer in the trenches, not only because it gives the story credibility, but because it’s so generative and, no other word for it, fun.