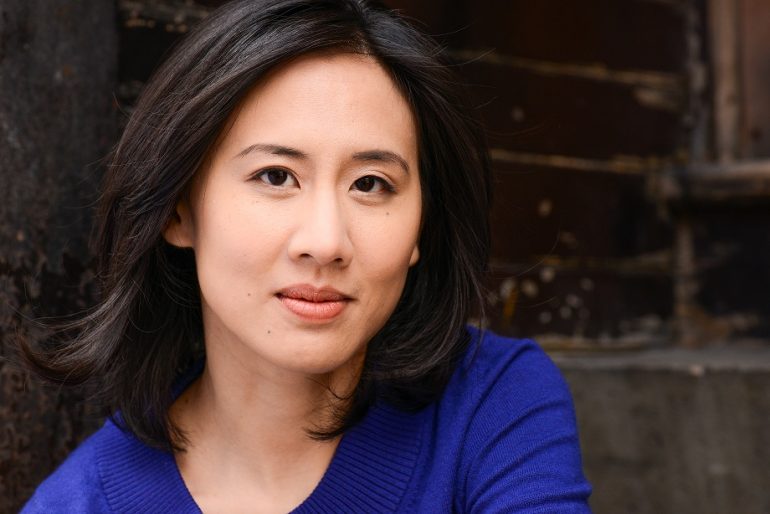 Today’s novelist is Celeste Ng, author of Everything I Never Told You, forthcoming from Penguin Press in June 2014.

So, Celeste, I’m at the official “One Year In” point of writing of my first novel, and I’m nowhere near finished with it.

Yay! And you’re not supposed to be. If there are people who are finished in under a year, I don’t want to hear about them.

I understand it took you six years to write your novel. For lack of a better way to phrase this, and not to sound like your mother but: why did it take you so long?

The short version: it took me a long time to figure out what I was doing. I wrote four drafts in those six years. I had the general story from the beginning—the favorite daughter goes missing and is found drowned, revealing a web of family secrets—and that stayed consistent throughout. But I had to figure out all of the family’s back story to understand how those secrets came to be. I wrote a lot of pages that never made it into the novel, but they shaped my understanding of the characters and the stories I was telling.

At the same time, I had to figure out the best way to tell this story: how much moving back in forth and time would I do? Which characters should get a point-of-view? And every draft had a major change in its structure until I finally hit on one that worked.

In terms of creative endeavors, did you work exclusively on the novel during that time?

I was faithful to the novel maybe 3/4 of the time. I did cheat here and there and work on a few stories in between drafts, when I needed a change of pace. But the novel was where all the energy was, so I kept coming back to that.

What motivated you to try this all again with a second novel?

Maybe it’s because I’m an eternal optimist; though I’m proud of the first novel, I keep thinking I can do better. Or maybe it’s misplaced self-confidence—I feel I learned a lot from the process of writing the first book and now I hope this second one will go more easily. (Ha!) Or maybe it’s like childbirth: we forget how painful it is because the reward at the end is so great. Whatever the reason, I’m totally smitten with the new idea right now, thinking about it all the time like a teenager mooning over a crush. I can’t not write it.

Did you do anything special to “celebrate” the milestone of working on a novel for a whole year?

One year in, I was working a terrible editing job and getting no writing done—and I hadn’t even finished a first draft! So it never occurred to me to celebrate. I would have been more likely eat a pint of ice cream and wallow in self-pity.

After a year of working, where was the novel, compared to its ultimate, published form?

I was about halfway through a first draft that was radically different from the final, both in form and point-of-view. Plus, it was missing several major plot elements that I had in the back of my mind but was too chicken to work in at the time. So it had about the same resemblance to the final book as maybe a Neanderthal to a human.

When you were One Year In to writing the novel, had you shared your work with others?

I had shared the first two chapters with my advisors at my MFA program, as they were part of my thesis. Except for that, I didn’t share any of it until the first draft was done, which was just shy of the two-year mark. I couldn’t. It was too raw and I couldn’t inflict it on anyone.

Finally, do you have any advice for those of us committed to these pokey, slow-growing novels?

I am not a religious person, so sticking with a pokey-slow-growing novel is the closest I get to an experience of faith. You sort of have to be zen about it—to believe, with no real evidence, that this idea keeps nudging you for a reason, and that eventually your subconscious will piece it all together.