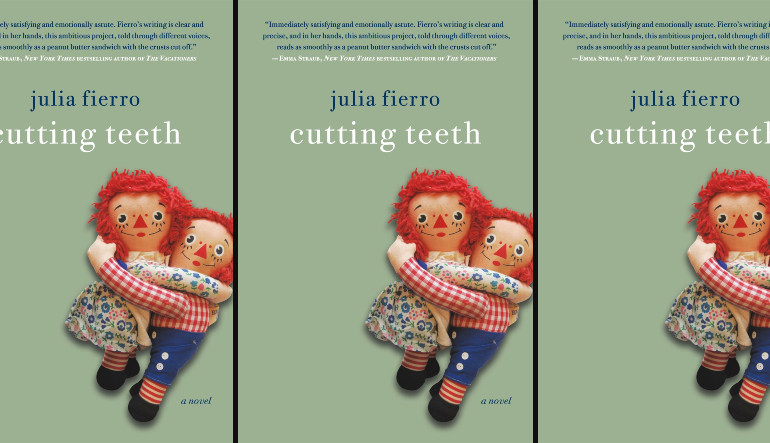 Today’s novelist is Julia Fierro,  founder of The Sackett Street Writers’ Workshop  in NYC. Her first novel, Cutting Teeth, is forthcoming from St. Martin’s Press in May 2014.

How long did it take you to write Cutting Teeth?

Well, that depends on how you measure time in relationships. Some people say, “Oh, my girlfriend/boyfriend and I have been together thirteen years.” Others will add, “Though there was that six-month period in year four when we saw other people…”

I began working on Cutting Teeth in earnest, writing six to eight hours at least every other day, in 2011, shortly after my second child turned one, when the haze of parenting an infant had just begun to clear. I wrote the first chapter, which is still the opening, without thinking, “This will be a novel!” It was more like, “Oh, I hope I can write more than ten pages before the baby wakes.” I dabbled for a year or so—taking notes and sketching outlines for scenes.

Then I had the great fortune of reading my first chapter at a reading series, and the warm response (people liked it!) motivated me. I decided to invest in my writing and doubled my babysitter’s hours. I had to give myself the chance to see if I could finish a book. My husband was a great support, watching the kids all weekend, and I hunkered down—day and night—and finished a revised draft of Cutting Teeth in ten months.

Had you written other novels before Cutting Teeth?

Cutting Teeth is my first novel to be published— but it’s not the first I’ve written. I’ve had serious monogamous relationships, and many a one-night stand, with several novels-in-progress over the last twelve years.

Was there any value to those other writing efforts? So many writers fear the specter of the “failed novel”: all of our time and energy devoted to something that no one will ever read.

The story of how I wrote Cutting Teeth must include the 6-year gap that came before, when I wasn’t writing at all.  After graduating from the Iowa Writers’ Workshop in 2002, already signed with an agent and eager to send my first novel out into the publishing world, I moved to Brooklyn. My new husband and I couldn’t find work, nor afford our rent, bills, even parking tickets! It took a year for every publishing house in NYC to pass on my first novel, which, I can see now, was for the best. I was 25, an inexperienced writer—what did I know about writing a novel?

I spent the next decade working multiple adjunct teaching jobs, founding and developing The Sackett Street Writers’ Workshop, teaching all the Sackett workshops in my home, editing other writers’ novel manuscripts, and raising our two children. When I did find time to write, I would write one opening chapter after another opening chapter—all, I see now, were practice for what would become Cutting Teeth.

So not-writing can actually be good for writing a novel? I’ve always assumed my own dry spells made me a failure—all those years passing by without a finished, or published, product.

Once I really started grooving on Cutting Teeth—when I’d rearranged my life, and my family’s life, so I’d have the time I need to see if I could write another novel, I felt amazing. I’d spent nearly a decade beating myself up, and chastising myself for not writing was really the most painful part for me—as self-criticism often is. You’re a fraud, I told myself. A failure. What would your Iowa classmates and professors think if they saw you now?

When I was so completely immersed in writing Cutting Teeth, I knew that those years spent not writing but teaching novel-writing workshops, one after the other, weren’t a loss, but that I had, in fact, learned how to write a novel. I had also grown up. I wouldn’t have been able to write Cutting Teeth ten, or even five, years ago.

What did you tell people when they’d ask, “How’s the novel?” or “When’s the novel coming out?”

I didn’t tell many people at first. I also didn’t really believe it would be published. Or read. It was this amazing place I escaped to. I suppose I feel safest when I am in the imaginary worlds I create, surrounded by my imaginary characters. It is where I am most bold, daring and adventurous.

What motivated you to keep writing the novel over such a long stretch of time?  Why not simply walk away and enjoy the world as most other people, who do not try to write novels, seem to do?

Like many writers, I just don’t feel like myself when I’m not writing. I am an obsessive observer and if I’m not transferring this tangle of images, details, snapshots, snippets of dialogue and characters to the page, my mind feels bloated to near-bursting.

I write to make sense of the world surrounding me, and, even more importantly, to inform myself of myself. Writing is how I learn, how I cope and how I reconcile the way I see the world with reality. In the words of Meg Wolitzer, “If you don’t create your own version of the world in your novel, then what’s the point?”

At the One Year-In point specifically, had you shared your work with others?

I didn’t share my work until I had almost a full draft. For the founder and director of a writer’s workshop that may sound odd. I just knew I had to first prove to myself that I could finish the book, before I’d have a tough enough skin to get feedback from friends.

Do you have any general advice for those of us committed to these pokey, slow-growing novels?

A year is not a long time to be working on a novel. Not at all. The work that I did in the years between writing that first chapter and then, two years later, dedicating myself fully to the writing of the novel, were full of “work”—maybe not butt-in-the-chair, word count-every day kind of work, but I thought about the novel nonstop. I took notes. I outlined. I collected details and character traits and lines and chapter titles and ideas. I got to know the characters I would write about. I observed. I absorbed. This is the kind of thinking that creates layers of meaning in a novel.

So much of novel writing is about waiting, which can be a huge challenge for the kind of writers who are attracted to novel writing—obsessive, impatient, controlling— mainly, me! Novels, like I said above, are a lot like relationships. And just like people, novels don’t reveal their secrets to you after the first date. Some secrets are so deliciously dark, they might take more than a year to uncover.