Today, I launch the series with my own experiences, and the wisdom of Cristina Henriquez, Rebecca Land Soodak, Leah Stewart, and Ploughshares’ own blog editor Andrew Ladd.

One Year In: It’s cold and lonely and ugly in here.

One year ago, I began writing my first novel. Or rather, I stood on the expanse of my novel’s Big Idea, and poked a spade into its earth.

Like the groundbreaking of a construction project, the beginning was exciting, public, and largely ceremonial. I presented the story (in Power Point!) to a room of 100 people. I dug into archives and piled up library books. I sketched blueprints of plot: three sets of characters whose relationships would be changed by a real event, the Peshtigo fire of 1871.

For months, I soared with new-project mania. I nattered about Canadian immigration patterns to anyone I encountered. Each daily experience was sifted and held to the light, a potential gem for my characters. Everything was literally noteworthy. Characters arrived in my mind full-voiced and ready to tell, tell, tell.

I was cheerfully obsessed with my novel. Then, I ruined all the fun by trying to write it.

One year later, what is built? A partial first draft, undergirded by research, and framed by a twenty-chapter outline—none of which will probably survive a second or third draft. (Plus, a bunch of other prose that is definitely Not-My-Novel.)

It’s not how I pictured the One-Year Novel-versary. I imagined a tower of manuscript pages, perhaps a little cake.

Am I doing it wrong? Actually, no. According to the authors I’ve interviewed, writing a novel can take two, five, even ten years or more. One year? It’s a drop in the bucket.

One year ago: A thrilling beginning!

But as I begin the next year of work, it’s time to make peace with what seems like the essence of novel writing: prolonged flailing. Sure, I’ve endured weeks of ugly drafts, but I’ve never dwelled for years in the middle of something undefined.

Who has? Other novelists.

As Dani Shapiro writes, “Middles are where you have to tough things out. Ideas fall apart. All that promise vanishes when facing the cold, harsh light of making something out of it.” Unless you’re Zora Neale Hurston or William Faulkner, writing a novel can be fast, or it can be pretty, but rarely is it both. From what I gather, most novelists concede elegance, direction, and completeness nearly every day for the lifespan of an average household pet.

The One-Year-In point is a time to realign expectations. Here’s what I originally set out to do—

Goal: To write, in one year, a 150-page first draft as charming as E.L. Doctorow’s Ragtime and as complex as Jennifer Egan’s A Visit From the Goon Squad.

—because this is exactly how I envisioned the finished novel, right down to the jacket copy.

In hindsight, this goal is plainly ridiculous. First, notes Ploughshares blog editor Andrew Ladd, author of What Ends, productivity should not be measured by calendars or word counts: “After a year I probably wasn’t even halfway through the first draft of my novel, because I was in grad school and was slacking off. But then I realized my thesis semester was coming up, and that kind of lit a fire under my ass. So I ended up polishing off the rest of that first draft in about three months, and I have to say, it came pretty easily at that point. I choose to see this as an advertisement for taking things slowly at first and letting your ideas percolate. Even though I hadn’t written the whole first draft after a year, I found I had a good, clear idea of everything that still needed to happen.”

Second, Cristina Henriquez explains that a novel’s first draft may look nothing like the published book. Her third novel, The Book of Unknown Americans, took five years to write. Why? “Re-writing. I finished a draft of the novel in about two years, so, not bad. But once I saw what I had, so much of it wasn’t working that I needed to go back and essentially overhaul the entire plot. And then I had to overhaul again. And then again. It would have been much easier if I had gotten the plot right from the beginning, but for me it’s usually difficult to know if something is right or if it works until I have it down on paper.”

Another challenge of a years-long project is motivation. What usually boosts my morale when I’m stuck? External validation. Put another way: 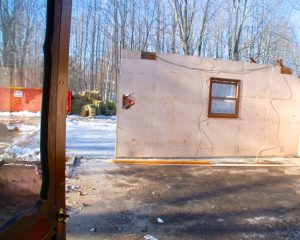 One year later: This is it?

Typical Motivation: I like to finish things and then publish them so that people will praise me.

But with this novel—a novel that has not been sold—no one will care about what I’m doing for years on end, let alone give me a prize. The work itself must be enough.

Rebecca Land Soodak, author of Henny on the Couch, describes how she had to learn to contain the world of the novel: “Here I was—a new writer. There was no evidence I would finish my manuscript—much less sell it. It was very difficult to take a stand and say ‘I’m working’ when no money had changed hands. This is a more layered conversation about making art and issues around money, power, gender, age and (though not in my case) race. The second most difficult part of the writing process involved waiting for feedback. I found it difficult to write and not receive immediate reactions. I found it difficult at times to sit with my work and contain that world on my own. Writing is a solitary endeavor. Not just the mechanics, but unpacking the story—existing in that world.”

Today is decidedly less thrilling than October 8th of last year. If a novel-in-progress means years of flailing, drafting, and revising, why should we keep writing?

Maybe because when it’s good, it’s better than anything else. Leah Stewart is the author of four novels; each of these took two to five years to write. All of her books had One-Year Novel-versaries, and all were eventually published. She says, “Colum McCann visited my campus last night, and he talked about how every writer is chasing the ‘sweet spot’ when the writing’s going really well. I think that’s why.”

It’s time to take heart. After one year, we may not be celebrating with cake, but in the meantime—well, all we have is the meantime. Lots of novelists have been right here, and they’re cheering us on. As Cristina Henriquez says, “‘Nowhere near done’ with a novel means you’re in the thick of it, really enmeshed, and that’s a lovely thing. Forge ahead! Slog through! You’ll get there. And it will be awesome when you do.”