Home
»
Writing
»
Writing Advice
»
Origin Stories: Amy Gustine’s You Should Pity Us Instead 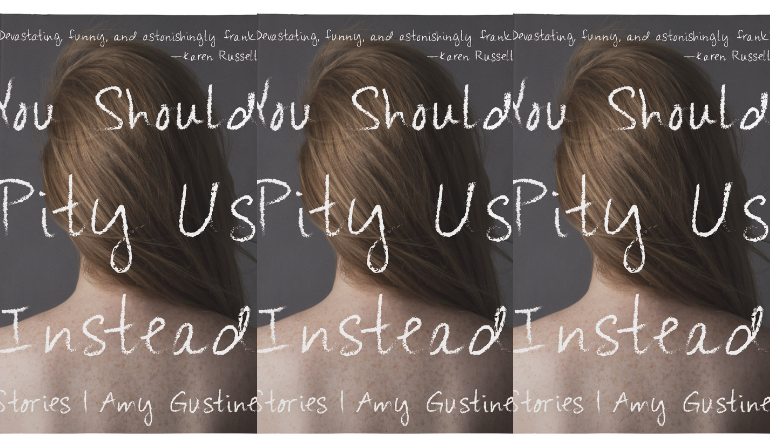 Amy Gustine’s debut collection, You Should Pity Us Instead, is an unsentimental exploration of people in distress. I recently asked Gustine where she drew her inspiration. She told me that stories come alive for her when she opposes two equal forces, which explains why each one feels like such an exquisitely engineered work of tension. Gustine gave me more details about the origin of three of them.

“All the Sons of Cain” is about the mother of a kidnapped Israeli soldier. Here’s how Gustine came up with the concept:

This story began with something I read about the national debate Israel was having about whether or not to exchange Palestinian prisoners for Gilad Shalit, an Israeli soldier who was being held in Gaza by Hamas. I tend to get interested in the effaced people behind news stories: the children adopted into unfamiliar cultures when their whole family dies after contact with loggers, the men behind those ads on Craiglist for naked cleaners. I became interested first in Shalit’s mother, and then the invented character of R’s mother, a soldier who is kidnapped after a prisoner exchange brings Shalit home. R’s mother sneaks into Gaza to try to free her son and befriends a Palestinian boy and his mother.

The collision of the mothers, Gustine went on to explain, broke open the story.

2. “You Should Pity Us Instead”

“You Should Pity Us Instead” follows a woman who moves back to her conservative hometown after her husband publishes an inflammatory attack on organized religion. Gustine kludged together the plot from two different sources of inspiration:

I was reading an article about some of the most vocal atheists, such as Christopher Hitchens, and I began to wonder about their family life. What impact did their criticism have on the social life of their children and spouses? But this didn’t have enough complexity and contradiction yet. I found the perfect complement to that idea in a newspaper article about a group of illegal loggers who infected a remote tribe of people in South America, Peru I think, with the common cold. Everyone in the tribe died except for half a dozen or so children, who were later adopted by Christian families. This event inspired the character of Elizabeth, a devoted Christian, a generous, loving mother, who welcomes a child from a very different culture into her home. At this point I had my oppositions: Molly, the ambivalent atheist, and Elizabeth, the devout Christian, both struggling to be mothers to children who may or may not find their answers to the great questions satisfactory.

In “When We’re Innocent,” a man whose daughter has just committed suicide draws solace from a man who’s just been accused of rape. Gustine told me that the fiction began with a real story:

I heard about a young woman who committed suicide, and her family was utterly shocked. She was a successful, healthy person, and no one, even in retrospect, could identify any reason for her wanting to die. This lodged in my heart quite powerfully, but it didn’t yet seem like a story to me. It’s a mystery and a tragedy, but not a story. It became a story when I introduced the character of Brian, a man who solicits women to clean his apartment naked. The dead young woman’s father, Obi, is a straight-laced, risk-averse, devoted family man who has come to clean out his dead daughter’s apartment and to find out why she killed herself. Brian is a single, furtive, and slightly sketchy young man who had a crush on Obi’s daughter. But Obi and Brian both loved Jocelyn. They are both guilt-ridden over events in their past and over Jocelyn’s death. They both seek answers and absolution. They are both simultaneously guilty and innocent.

Amy Gustine’s short fiction has appeared in The Kenyon Review, North American Review, Black Warrior Review, The Massachusetts Review, and elsewhere. You Should Pity Us Instead is out now from Sarabande Books.

Tags:Amy Gustine, Origin Stories, Sarabande Books, writing prompts, You Should Pity Us Instead