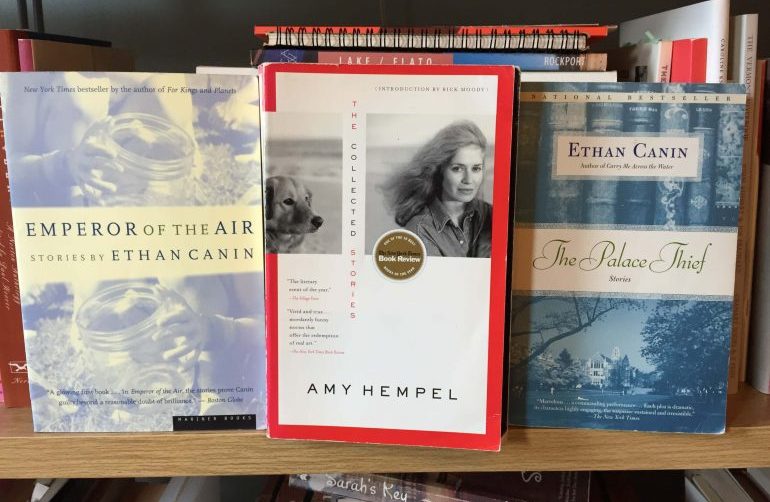 How do great authors begin their fiction? With a line or a character, a memory or a mission? This year, as Ploughshares’s unofficial origin-story archivist, I’ll investigate.

Because I’m a teacher, I started by looking for stories that grew out of writing assignments. Here’s what I found.

1. Amy Hempel’s “In the Cemetery Where Al Jolson Is Buried”

Amy Hempel’s most anthologized short story came from the first assignment in a fiction class taught by Gordon Lish. Hempel recounts the experience in a Paris Review interview:

The assignment was to write our worst secret, the thing we would never live down, the thing that, as Gordon put it, “dismantles your own sense of yourself.” And everybody knew instantly what that thing, for them, was. We found out immediately that the stakes were very high, that we were expected to say something no one else had said, and to divulge much harder truths than we had ever told or ever thought to tell. No half-measures. He thought any of us could do it if we wanted it badly enough…I failed my best friend when she was dying. It became the subject of the first story I wrote, “In the Cemetery Where Al Jolson Is Buried.”

If Gordon Lish isn’t around to pummel you into genius, take heart: you can be your own teacher. Ethan Canin favors this approach, as he explains in The Atlantic:

“Accountant,” about the world’s most upstanding criminal, is one of my favorite stories, and the freighted sock is a perfect emblem of the narrator’s simultaneous silliness and pathos.

4 & 5. Rachel Yoder’s “Story Per My Therapist’s Request: A Story by Rachel Yoder” and “I Want to Forgive Everyone, Trousers”

Would it surprise you if I told you that “Story Per My Therapist’s Request: A Story by Rachel Yoder” is a story, by Rachel Yoder, written at her therapist’s request? Maybe not, but the piece itself—a Klein bottle of a narrative with a cameo by an alien—certainly will.

Writer, heal thyself. Or don’t, since you would lose your best material.

Machado came up with one of the loveliest and oddest self-assignments I’ve ever heard, which accounts for the lovely oddity of “Especially Heinous,” a ghost story wrapped in a hard-boiled pastiche. She pasted the title of every Law & Order: Special Victims Unit episode from seasons one through twelve into a Word doc, then used the titles as jumping-off points for her vignettes (presented as episode summaries). Machado explained the process to me:

I built on the titles as I wrote, finding patterns in them, using them to come up with new plot lines and one-off “episodes.” Because I couldn’t move the episodes around or eliminate any—I wanted to stay true to all off the titles and their order—I had to make the structure work in this very particular way. It was a challenge, but that restriction gave me so many wonderful ideas.

7. Zachary Tyler Vickers’s “The Quandary of the Pointy Objects Annex”

Vickers wrote “Quandary” in response to a George Saunders essay in The Braindead Megaphone about the structure of Donald Barthelme’s “The School.” The implicit prompt was to write a story that escalates until the reader deciphers the pattern, then to change the pattern.

The Saunders essay includes a line that’s become part of my fiction vocabulary: “A story can be thought of as a series of these little gas stations. The main point is to get the reader around the track; that is, to the end of the story.” In Vickers’s indescribable story, these gas stations take the form of jubilant, hysterical anarchy.

7×7: A Whole Magazine of Assignment-Based Stories

Every piece in 7×7 is created via exquisite corpse: an artist draws a picture, a writer responds with a short composition, and so on for seven rounds. I wrote a (forthcoming) story for the magazine, and the game’s constraints made it seem easier, not harder, to be creative. The experience gave me a better understanding of Robert Frost’s line about form and meter: “I’d sooner write free verse as play tennis with the net down.” It’s nice to have a notion of where you might want to smack the ball.

Are you looking for more assignments? I’ve started a collection here. Let me know if you’re aware of other good stories written by prompt.