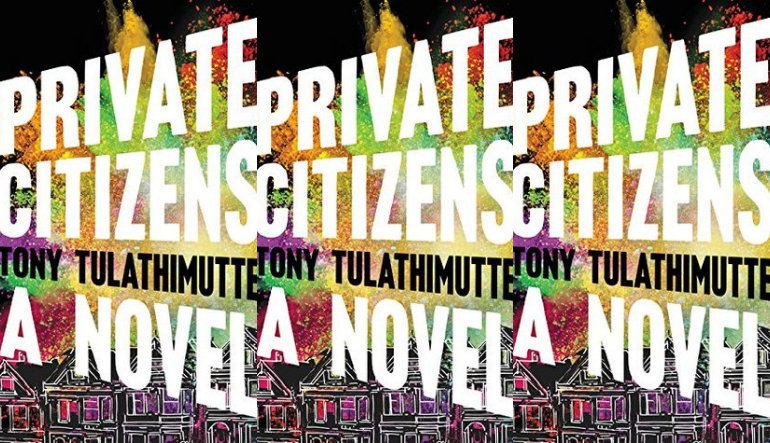 Tony Tulathimutte’s debut novel, Private Citizens, charts the spectacular floundering of four recent college graduates. His eye is so sharp, his characters so recognizable, and his truth so pitiless that I sometimes had to close the book, as if he might read my soul through its pages. This is one of the most provocatively intelligent novels I’ve ever read.

I met Tony at a bar and asked him how the book came about.

David Busis: You said that before you started this book, you were writing pious, well-crafted stories. Did this book come out of a contrarian impulse, or did it come out of a willingness to take a risk that you weren’t willing to take before?

Tony Tulathimutte: Pure desperation. I hadn’t written almost anything for two years. I’d written a story collection that on some deep level I was too ashamed of to even try publishing, because of this issue of piety. The novel I’d been working on ended up dehydrating into a novella. Process-wise it was an important bridge between the older stuff and this, writing at greater length, but stylistically it was still like the old stuff. Once you’ve been writing a few years, it’s hard to let go of whatever little accolade or attention you’ve managed to get and start over with a new approach. But you have to, if you don’t want to stagnate.

After a couple of years of kicking around, I sat down and wrote a totally aimless forty-page story about people day-tripping to the beach, similar to a trip I’d taken a couple of years earlier. I’d remembered thinking very vividly on that trip, why do I feel so anxious, why is it so hard to enjoy this? It’s sunny, we’re going to the beach, I like these people. Why then do I feel like I’m wasting my time, or that we’re doing something frivolous in the face of an apocalypse, or that I could be doing something better with my time, or that we could have been more imaginative and come up with something more fun? What’s the point of being here with my friends, I’m not going to meet a girl—all these totally destructive critical thoughts were keeping me from a very simple visceral pleasure.

Originally I thought it’d just be about Linda, trying to make the trip more exciting by telling this big whopper of a lie about these fun things she’s been doing recently, while everybody else nods and goes “Uh huh.” Then I realized the story didn’t work unless it dramatized what everyone else is thinking, whether or not they buy what she’s saying, if they’re annoyed by it or not, if it’s ruining their good time too.

But from there I’m like, Great, I just wrote a forty-page story with no plot, action, or dialogue. [Laughs.] And on top of that, it sort of compared unfavorably to what was out there culturally. We’ve seen vaguely ennui-afflicted young people who know what’s good passing PBRs to each other before. Later I workshopped it at Iowa and everyone just kind of shrugged. I was dissatisfied with it too, but I also had no other leads, nothing else I wanted to write about. And I was aware of this peril of writing about twentysomethings. This is back in 2008; Girls came out two years later. Every attempt at writing about people my age up to that point had always struck me as frivolous and self-indulgent, probably because we ourselves were being characterized as frivolous and self-indulgent. You pick up all these prohibitions when you’re learning how to write against being self-indulgent and masturbatory.

Eventually I just caved in. I think I was on the phone with my friend Karan Mahajan, who’s also got a book coming out, and he says, “So, just expand it. You’re just not done writing it yet.” And I say, “Well no, it’s a self-contained thing, it’s an episode, a vignette, whatever.” And he’s just like, “No, you just have to write this book, and you’re a good writer. The worst that could happen is that you write the book of your generation.” I tell him that’s not at all what I want to write. So I end this phone call feeling grimly dissatisfied, and sit around until it just became unbearable not to be working on anything. So one night I sat down and thought, okay, I’m just gonna sketch these four different characters and give them each a scenario. This wound up as the prologue of the novel, in a condensed form.