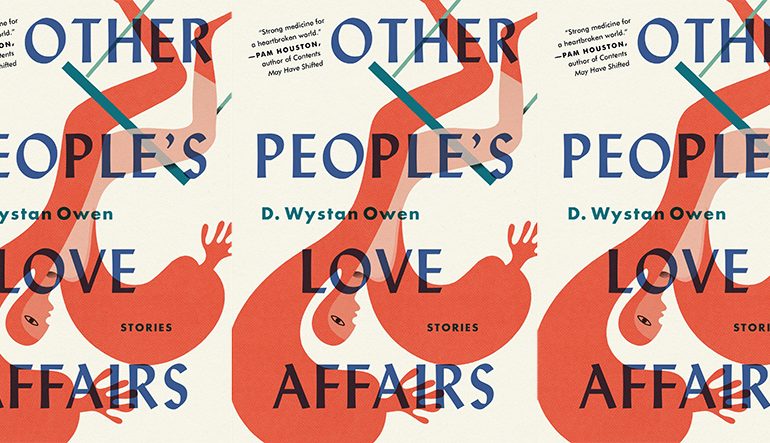 D. Wystan Owen’s beautiful debut collection, Other People’s Love Affairs, is a book to treasure. The ten quiet stories are linked by place—the stories are set in Glass, a fictional town on the British coast—but they are also linked by Owen’s great fascination with understanding the weight of the past on the present. In this way, these stories are timeless character studies, bolstered by lovely prose and equally stunning insights. This is a collection to read slowly and savor, stories to read again and again.

There is no doubt that Owen is writing in the tradition of William Trevor and Yiyun Li. Owen has written beautifully about Trevor in Literary Hub, and he reviewed Trevor’s final collection for the Threepenny Review; he studied with Li in graduate school. Both of their influences are clear in the way that Owen studies and inhabits his often-lonely characters, in his exploration of why people behave the way they do, and in his prose. In the Trevor review, Owen writes about coming to the understanding, early in his career, that his work suffered in comparison to Trevor’s, as he hadn’t “wondered enough.” It seems clear in this collection that he has, in fact, wondered so elegantly and so completely that he has created a whole world.

And it is in that rendering of this fictional world that Owen moves away from Trevor’s shadow. He is able to easily shift between point-of-view characters—males and females, of varying ages—within stories but also from story to story. The world is created by the way each story is layered on top of the others. In other fine linked collections, such as Swallowed by the Cold by Jensen Beach or Anything Is Possible by Elizabeth Strout, the community of the world is underlined by the connections between characters and stories. Here, characters do not reappear; they are often outsiders, even within this community, and the separateness of each story reinforces our sense of each character’s loneliness and isolation. But the town gets built for us, sentence by sentence, story by story. By the end, we feel as though we, too, live in Glass, as we can now see the town and all the stories that lie within it. In this way, the collection moves from the specific to the universal.

It’s hard to choose a favorite story here, but “A Bit of Fun” is Owen at his finest. The story follows Gerald Malden as he returns to Glass, where he grew up, after many years away. Rather than set up the story in a traditional manner, with sections of the present moment intercut with scenes from the past, Owen allows us direct access to Gerald’s thoughts so that we can see exactly how the present triggers the past, how thoughts move in nonlinear ways. We learn of a summer, long ago, when Gerald went to the movies with an older woman, a summer memory that he never even shared with his now-dead wife:

Even then, he had said nothing of the woman from the flower shop; even then he had kept the memory for himself. There had a been a heat on those nights as they confessed their virginity, a heat the first time she slept pressed against him. It had felt as if no space existed between them, when in fact, hardly noticing, he was maintaining one. Over time, that he had not told her became a part of what there was, the memory as much privately his as a dream in the moments just after waking.

There is a melancholy here that runs through all the stories in the book. The understandings that many of these characters arrive at are not necessarily ones that make them happy or optimistic. The nostalgia for the past—of that time before knowing and understanding—often overwhelms and engulfs the present. Kenneth, in “What Is Meant to Remain,” has been divorced for seventeen years, and he realizes, “What you missed, really, wasn’t marriage itself; it was only the knowledge that there was someone.”

Owen frequently changes point of view within a story, allowing us to see an event or a relationship from multiple angles. Here, too, it is in learning how different characters have varying interpretations that we understand how isolated the characters are; they are often deceived, misunderstood, confused. Their worldview is limited to their own understanding; we, through Owen’s deft use of point of view, are given the ability to rise above them and to see more broadly, although we know, when we return to our own lives, that we are equally limited in our perception.

The gentle stories occasionally include moments of love, although the love is less passionate, perhaps, than a younger self would have hoped. Myron, in “The Well Sister,” thinks about a pair of sisters whom he had known and loved when they were children: “It was, rather, pure and complete fascination; he loved them the way a person might love the sea.” At the end of  “A Romance,” when Abigail has settled for and married Harold after losing the stranger who won her heart, she understands “that while no love had welled in her chest as, at last, his distant figure appeared, it had made nonetheless a welcome sight in approach: slow-moving, blue against the black, rutted road, and beyond it the moon a broken dish on the sea.” As shown here, the landscape and the setting are beautifully drawn throughout, with descriptions often mirroring the interiority of a character. It is the place, finally, that binds these characters together and allow us to see, even if they can’t, how much we all share.