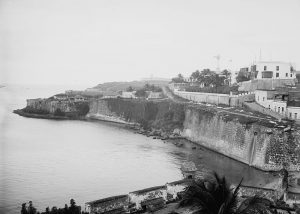 When news of Hurricane Maria and its aftermath—no part of the political disaster is natural—began leaking into the headlines, I started turning over the words of Marigloria Palma’s poem “San Juan and Her Parrots,” thumbing over the lines as my grandmother might’ve her rosary beads in late afternoon light.

It’s dawn.
The city stands steep on her stone toes
to welcome the hazy tulip of morning light.
Inside the corset of her fortress San Juan
slides bright stockings over ancient feet.

I have been thinking about this poem for months. I taught it to students in Havana this summer as a lesson on how to render place, how to personify a seething city. Traveling in Ireland—the island of my own inherited colonial diaspora—I scribbled a few lines of a yet unfinished homage poem, “Dublin and Her Gulls.” Back in the American South, I assigned it to college kids in an introductory creative writing workshop as a primer on how to effect a diaphanous poetic voice. “Vamos a ver,” Palma interrupts her own verse. “Let’s see: we’ll start over.”

Palma’s work has come to my attention in the last year thanks to the elegant translations—equal parts piping vibrato and powerful economy—of the poet, essayist, and translator Carina del Valle Schorske, whom I’ve been fortunate to know as a colleague and a friend. In a Translator’s Note that accompanied her winning entry to the 2016 Gulf Coast Translation Prize, del Valle Schorske contextualizes the project of the collection from which this poem is drawn.

The Night & Other Electric Flowers (1976) offers one example of diasporic experimentation continuous with the feminist pastoral poetics of Julia de Burgos but contemporary with the politically charged performance of the Nuyorican scene. Both influences often romanticize the tropical landscape of the island as a site of authenticity. But Palma recognizes an ecosystem in ‘biochemical crisis’ blurred by “violated moonlight”—without pretending that she herself is immune to the seductions of poetic illusion. In her characteristic mode of high lyricism and ironic erotics, human figures are “whipped’ by sweet breezes, “squeezed tight” and “oppressed” by the sea. The violence of these intimate attachments to the island—to its flora, fauna, weather, and rhythms—is symptomatic, for Palma, of the violence that keeps Puerto Rico in its place as a colony, as a tourist destination, and even as a would-be nation. These poems want to ‘set the sea on fire.

This elemental simmer staged on the horizons of Palma’s poetics is capacious. It is full of yearning and revolt. The ocean ablaze illumines possibilities of aqueous transfer and consumes neocolonial maritime stricture. It rages against the smallness to which Puerto Rico has been territorialized. “The idea of smallness is relative,” writes Epeli Hau’ofa in his essay “Our Sea of Islands.” “It depends on what is included and excluded in any calculation of size.” And, subsequently: “Smallness is a state of mind.” Palma’s state of mind is large and lit.

The “unincorporated territory” of Puerto Rico is both captive and afloat, tethered to the imperial power like an inner tube let out on the water and pulled in again. In 1901, Chief Justice Melville Fuller would write in his dissenting opinion of the first of the Insular Cases that codified Puerto Rico “foreign in a domestic sense” that this nebulous colonization “had the power to keep it, like a disembodied shade, in an intermediate state of ambiguous existence for an indefinite period.” [But lest you give this cat too much credit, remember Fuller threw in on the majority opinion for Plessy v. Ferguson that would uphold segregation well into the mid-twentieth century.]

Palma renders precisely this spectrality of her island—the willful legal, economic, and social (which is all to say: racist) invisibilities that have intentioned to create humanitarian crisis and impending exodus in the hurricane’s wake. “We’re dying here. We truly are dying here,” implored San Juan’s Mayor, Carmen Yulín Cruz last week.

In “San Juan and Her Parrots,” the city appears in all its slippery translucence.

The city rises in her finely spun gown of brightness
and fastens her slippers, she hums a crystal song,
and she sees all the eyes peering out from the
frames of the multiplying windows.

Later: “The city is strained honey.”

It’s all impossible amber, fibrous glow, the ocular interpretation in frame after slick window frame, the pellucidity of sound.  This lady, her capitol, Palma tells us, is hard to hold on to.

The eponymous parrots are harder still to pin down and maybe that’s the point.

The parrots are coming now.
They come from the White House, the seashore.

They fly out from the seat of power at the cusp of the Bahía de San Juan, at the place where the ocean meets the land.  The Casa Blanca was variously occupied by conquerors—the conquistador Ponce de León himself fresh from Hispanola’s Higüey massacre and a shuffling succession of Spanish and U.S. invaders and occupiers. The building bespeaks another of Hau’ofa truisms: “Conquerors come, conquerors go, the ocean remains.” And so does the audible tapestry of sky, the domain of parrots, Palma insists. The fortified precipice is no barrier to their “free green wings.”

Palma writes of the parrots:

Parrots, the sweetest parrots! And they’re ours!

the parrots are coming with their green alphabet
to write lyrics for our murmuring.

The parrots beam
our buried cry through blue jaws.

The implacable, swirling orthography of Palma’s parrots is the beloved’s excavation, the undug crystalline song, a mode of belonging cut free from the territory of ownership. “I mean you can’t spell anything I talk about with that sorry alphabet you have left over from yesterday,” Eve Ewing writes as an homage to Zora Neale Hurston in her poem, “What I Mean When I Say I’m Sharpening My Oyster Knife.” But, what grammar is possible in the murmullo, the zumbido, the buzz, of San Juan’s parrots?

“Hope is a thing with feathers,” Emily Dickinson writes. Palma revises: “the sky is hope’s drifting scrawl.” But here, in the wake of Puerto Rico’s long, indeterminate abandonment, there’s got to be more than squinting at the horizon.