People of the Book is an interview series gathering those engaged with books, broadly defined. As participants answer the same set of questions, their varied responses chart an informal ethnography of the book, highlighting its rich history as a mutable medium and anticipating its potential future. This week brings the conversation to James Reid-Cunningham, Deputy Director of the Boston Athenaeum. 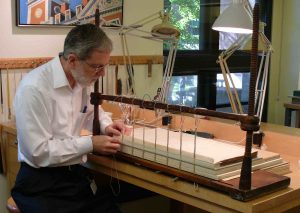 Dictionary definitions are generally useless because they focus on characteristics of codex books such as “sequences of pages” held together somehow. Any webpage or magazine or restaurant menu qualifies as a book by that definition. Physical books are such subtle assemblages of information and language and beauty that it becomes difficult to explain the attraction they create in us. I’m not sure anymore what is a book or isn’t a book, but I’m also not sure that it really matters.

I always differentiate between physical books made with paper, and electronic documents in whatever format. Originally the uses of paper and digital books were very similar, but as digital technologies have transformed human communications over the last decade, paper books are declining in popularity at the same time that book art, i.e., artistic objects utilizing the book format as a means of artistic expression, is flourishing. I have no reason to believe that the displacement of paper books by e-books will lessen in the near future.

Trying to define a “book” reminds me of the judge who, when ruling on a case involving pornography, said that although he cannot define pornography, he knows it when he sees it.

I have been creating artistic books and conserving rare books for three decades. I first became interested in bookbinding in the late 1970s through a desire to create artistic bindings. I work as a book and paper conservator, print my own limited editions, create fine bindings, book art and sculptural books, and in the last three years I began overseeing the digitization of rare books at the Athenaeum. In some ways, I still do not understand why I create books, but I have come to the conclusion that I am simply unable to not create books.

I created a unique book sculpture about ten years ago called Apocalypse: Zero Hour. The textblock was composed of hell money, which is meant to be burned at funerals in some Asian traditions so that the deceased person has cash to spend in the afterlife. So I decided that I should partially burn the textblock. I sewed the book, then took it out into the back yard, and holding it up with barbecue tongs, I tried to set it on fire with a lighter. You’d be amazed how difficult it is to actually set a book on fire; the closed pages were just a little singed around the edges. It occurred to me as I was setting it afire in the backyard that maybe one of my neighbors could see what I was doing. I haven’t set a book on fire since.

In the 19th century, printing technologies changed in order to print more books faster, and the result was acidic paper and structurally weak bindings. Conservators decry this result, but the change happened because of greater literacy across a wider swathe of the population, and because of increased access to education among more social groups. More education and more literacy meant greater demand for books. So the decline in the physical qualities of books is directly related to greater literacy and educational levels, which although bad for the books, was very good for our civilization.

Another tidbit: since the 1970s, there has been a revival of arts of the handmade book that previously were in decline, almost facing extinction: letterpress printing, papermaking, marbling, calligraphy, and bookbinding. My career was part of this development. Over several decades as computers and digital technologies have come to dominate every almost aspect of daily life, handmade books flourished. The reason is that people love objects; they desire things. For all of the convenience of e-readers, people still want something enduring, something physical, something they can touch. 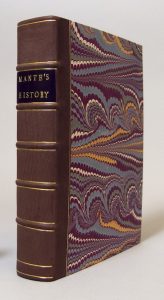 Conservation rebinding on The History of the Late War in North-America, London, 1772

Books are sensual objects. The reason I’m attracted to leather, gold, papyrus, and parchment is that they look good, and they feel good. A book should feel good in your hands, you should enjoy handling it. Bookbinders understand the intoxicating physical pleasure of books.

Finnegans Wake by James Joyce: I read it in a reading group during the mid-1970s; we’d read a passage and discuss the passage, then read it again. I must be one of the very few people in the world who have read Finnegans Wake more than once.

Crash, by J.G. Ballard: I bought the hardback in London when it first came out in the early 1970s. Like all the best books, it opened up a world for me that I had no idea existed.

Gravity’s Rainbow by Thomas Pynchon: I still find the novel unexplainable because of the sheer enormity of the prose, and the relentless way Pynchon bombards the reader with characters and events and correspondences and conspiracies. I’ve read it over and over, and I still do not comprehend it.

Transitional periods in technology are fascinating, especially when a dominant technology faces transformation or extinction. We are coming to that point with paper books. Physical books survive now in only two ways: as cheap and disposable carriers of information and experience, and as artistic objects divorced from that traditional role. Artists are turning to the book format increasingly over time, creating books that challenge convention. The evocative term “book art” encompasses a wide range of art objects, including books created entirely by a single person, altered books, book sculptures, and luxurious private press volumes. Book art isn’t the future of the book, but it is certainly one future of the book.

I am personally responsible for used bookstores dying out. I used to haunt used bookshops with a list in my mind of maybe one hundred books I was looking for. I only found a book because the store happened to have it, but now every single one of those books is available in an instant, often for amazingly low prices. All I have to do is choose which of the one hundred books I most want today. So I don’t go to used bookstores very often at all. The hunt is gone, and with it, the knowledge gleaned from wandering around bookstores and handling hundreds of books I’ll never purchase, or read.

The era of the codex as the dominant technology for recording and transmitting knowledge is already over, although paper books linger on. We should note the difference between books of historical value, and books for general use. Rare books of historic, artistic or literary merit will be preserved by conservators, but fewer books will be published that will become rare and valuable in the future. The primary future for the physical book is as a mechanism for artistic expression. Books that merely carry data will die.

As a book conservator, I’m constantly asked if the book is dead. But the question we should be asking isn’t “Is the book dead?” but rather, “Why did the codex book survive for so long?” In late antiquity, papyrus rolls were replaced over several centuries by books in the form of a codex, with individual pages of the book held together at the spine. The codex was the enduring form of human communication for two thousands years. Think about it: how many technologies have had such an impact? Each transition of book technology has been a massive disruption to human culture and civilization. The transition from the papyrus roll to the codex in late Antiquity and the invention of printing with movable type on paper in the 15th century were periods of enormous cultural change, paralleling the development to digital texts in the last two decades.

So is the book dead? Not yet. Physical books have yet to die out because there remain people who love books as objects, as experiences. But all technologies are eventually superseded, and everything dies eventually.

James Reid-Cunningham is Deputy Director of the Boston Athenaeum, supervising library services and special collections, in addition to digital initiatives and the conservation laboratory. He trained as a bookbinder at the North Bennet Street School in Boston, MA. He was the Conservator of the Graduate School of Design at Harvard University before joining the Athenaeum in 2003 as Chief Conservator. A noted teacher in book and paper conservation, he taught workshops at Harvard University, Dartmouth College, Kilgarlin Center for the Preservation of the Cultural Record at the University of Texas at Austin, University of Kentucky, Paper and Book Intensive, Garage Annex School for Book Arts, and New England Museum Association. Since 2009, he served as the adjunct lecturer in book conservation in the graduate art conservation program at Buffalo State College. In 2006 he received the Distinguished Alumni Award from the North Bennet Street School, and was the president of the Guild of Book Workers from 2006 to 2010. He is also the creator of design bindings and book objects that explore traditional bookbinding structures in conjunction with modern materials. He has exhibited his books nationally and internationally, and his artwork can be seen here.