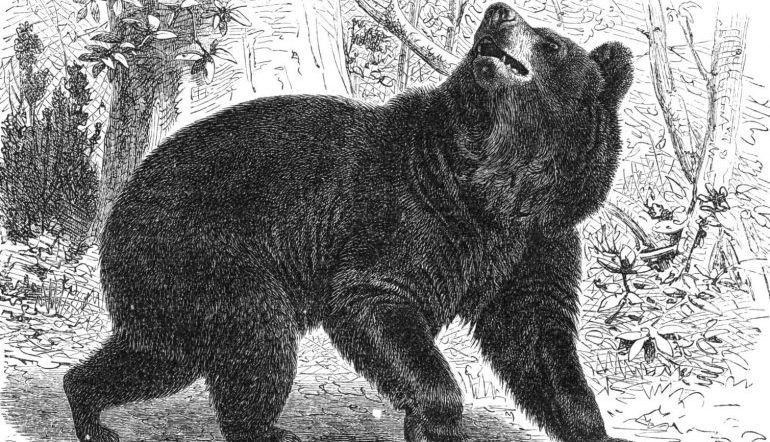 Or, My Zealous Adoration of Faulkner’s “The Bear”


“The Bear’ is at once so simple and so complex that it surrenders its meaning to the conscious mind only after repeated readings and much brooding,” Daniel Hoffman, Faulkner’s Country Matters, 1989

Guest post by Megan Mayhew BergmanYou’ve read it, too–the story that stays with you, the one you can’t shake, the one you forget you’re reading while you’re reading because you’re entirely absorbed in the writer’s world. The story you find yourself reading again each year. The story that makes you a literary evangelical–you can’t stop telling your friends: You’ve got to read this. These stories leave a residue on your imagination. They stick. They probe. They linger. And they’re different for everyone.

I’m downright reverent about Leonard Michael’s story “Manikin,” which I still have nightmares about. Flannery O’Connor’s “Wildcat” and “View of the Woods” were formative stories when I began owning my love of literature. Alice Munro’s “Runaway” humbled me with its fullness and believability. There’s Padgett Powell’s ethereal short short “Flood,” Lydia Peele’s authentic “Phantom Pain,” and Breece Pancake’s haunting “In the Dry.” Once, sitting in Dulles International on business travel, I fell in love with the entire 2006 Fiction Issue of The Atlantic, particularly Tim Gautreaux’s story “The Typewriter” and Lauren Groff’s exquisite “L. Debard and Aliette.” I could go on with examples from Mary Robison, Brad Watson, Amy Hempel, Raymond Carver, and Mary Gaitskill.

But no short story has affected me in the way of Faulkner’s not-so-short story “The Bear.”

There are terrific things writers do to engage us–compelling voice, character development, gorgeous language, narrative arc–but they send their work out with one huge variable in front of them: the reader.

I think it’s interesting, but not imperative (Reading bliss is sweet! Why pull yourself out of it on purpose?), to acknowledge the baggage we bring to the reading of a story. Readers arrive to each narrative with different attention spans, needs, passions, vocabularies, stylistic preferences, political and social bias, etc. Some of our baggage, I’ll wager, is even biological or vestigial, such as our reaction to a well-crafted predation scene. We are complex receptacles, and even the most beautifully-wrought, award-winning prose lands differently on each of us.

My abbreviated essential baggage: I’m a transplanted Southerner with complicated feelings about the place I grew up. I’m an outdoors nut, pro-wilderness. I now live on a farm in Vermont with a mountain in my backyard. I’m an animal enthusiast, married to a veterinarian. I brake for squirrels. I get starry-eyed about language in stories. I’m desperately in love with–and afraid of–large predators.

With that in mind, I want to tell you why I’m crazy about “The Bear”–why I think, outside of just being astounding Faulkner-ian literature, it became my favorite story.

And Southerners, at heart, love an epic. Tell us who begot whom in the pages of a family bible or ledger. Give us a lineage, a homestead to fawn over, a patriarch to rise against, a farm to save. Give us a generational curse to outrun; hint at something mythical. Faulkner does all of these things in “The Bear” and thus stokes my Southern sensibilities.

The story’s protagonist, Isaac McCaslin, reflects on the land of his childhood, particularly those events surrounding an annual bear hunt and legendary bear, Old Ben. The bear “ran in his knowledge before he ever saw it. It loomed and towered in his dreams before he even saw the unaxed woods where it left its crooked print…too big for the dogs which tried to bay it, for the horses which tried to ride it down, for the men and the bullets they fired into it; too big for the very country which was its constricting scope.” Ultimately, through his relationship with the hunt and the land, Isaac comes to terms with his feelings about the waning wilderness around him, and his family’s mistreatment of slaves. He gives up the family land, saying, “I can’t repudiate it. It was never mine to repudiate.”

The scope of “The Bear” is enormous, and the conflicts cross generations. Admittedly, Faulkner takes nearly 100 pages to accomplish the epic tale. (“The Bear” was published in short story form in Harper’s and the Saturday Evening Post, but was eventually cast as a chapter in Faulkner’s novel, Go Down, Moses.) In the hands of another author, such wide parameters might spell disaster. But like much of Faulkner’s work, the story is spatially and genetically figured in meticulous fashion. The story was rich enough for my graduate lecture, and one I could–and will–continually plumb.

2. It provokes a visceral reaction.

Faulkner makes me feel something with this story: fear, sadness, stress. My engagement with “The Bear” is both physical and emotional. First, Faulkner’s rendering of hunt scenes gets my adrenaline going. Faulkner sets up a motley group of characters in a hunting party–some unstable–who are eager to prove themselves and slay the bear that has been taunting them for years. There are shots fired, close encounters with Old Ben, dogs killed, and the bear once hovers over Isaac like a “thunderclap.” Throughout the story, Faulkner harnesses the seductive power and narrative energy of imminent danger.

Then there’s the dog lady in me, who can love any snarling, one-eyed thing down on its luck. Lion is the wild dog Isaac’s spiritual father, Sam, trapped in the woods, with the belief that it would be the dog to take down Old Ben. The dog is enormous, fierce, part Airedale and Mastiff, and carries a cold air of “impersonal malignance.” After years of trying, Lion finally gets Old Ben, and has to be pried from the bear’s throat, “his guts all out of him.” Though Faulkner is never sentimental, he breaks your heart with the dog’s determination. Or, at least, he breaks mine.

Each time I read it, I become more involved with the story. My muscles tense; my teeth clench. I anticipate; I grieve.

3. I drink the thematic Kool-aid.

The theme of “The Bear” is prescient and connects to modern anxieties that are important to me–the diminished wilderness, the idea that man should not try to possess and tame the natural world, and that separating ourselves further from nature is bad for the human spirit. Old Ben, I believe, represents nature herself. He was the “epitome and apotheosis of the old, wild life which the little puny humans swarmed and hacked at in a fury of abhorrence and fear, like pygmies about the ankles of a drowsing elephant…”
Faulkner’s story is ambitious and big-hearted, not soft. The intention of “The Bear” is big, but the story is bigger than its agenda. His men are gruff and troubled. The setting is rustic, often the woods or a “rank” hunting cabin populated with near-feral guides. The narrative, characters, and setting seem so natural, so true that the theme is delivered almost subconsciously to the reader.

After repeated readings, I find “The Bear” achingly beautiful. I feel that Faulkner touches and renders sublimity. And thus, I declare it my favorite.

I want to know: Do you have one story you hold above all others?

This is Megan’s tenth post for Get Behind the Plough.