After a fevered start to the competition, with spirited fights from each side, the competition slowed this last week as Buckle Your Corn Belts and Vonnegut to the Chopper! tortoised their way through the match-up. The teams ended at a stalemate, and we were forced to implement a tiebreaker: write one tweet from the point of view of one of your team’s writers, explaining why your team deserves to advance.

The winner, determined by the commissioner with help from the Ploughshares front office, was Vonnegut to the Chopper! Manager Brenna Dixon tweeted from Langston Hughes’s point of view, her take on the poem “Children’s Rhymes“: “By what runs/the Cornhuskers/we ain’t run/Genre HOA/is just no fun/What bugs/them cornfolks/don’t bug us/we know rules/aren’t worth the fuss.”

They advance to take on What the Chuckin’ Buk?! two weeks from now.

But this week, we have the semifinals!

The semifinals begin with an epic match-up that really could be the finals of this competition. I don’t want to count out What the Chuckin’ Buk?! or Vonnegut to the Chopper!, but they just don’t command the same star power as these two teams. Both Caulbabies manager Michael Nye (Missouri Review) and Benjamin Samuel (Electric Literature) follow the formula favored by NBA teams, publishing houses, and book clubs across America: three All-Stars supported by key role players.

Nye has been bold with his trash talk at the podium:

Look, if The Holden Caulbabies are going to battle, there isn’t much need to talk about how we’re going to dominate. Still. We enjoy looking around at the bracket and deciding who is going to finish second. I’m sure there are plenty of tired witticisms from the editors and writers on the other teams. Child, please. We have no reply to make to them other than the brilliance of our poetry and prose. You come at the king, you best not miss.

But will his team back up the talk? Joining the commissioner today to analyze the competition is writer and assistant professor from the University of New Orleans M.O. Walsh.

Walsh was born and raised in Baton Rouge, Louisiana, but he studied in Oxford, Mississippi (The Land of Faulkner!), and still runs the Yokshop Writer’s Conference there—so the commissioner is especially curious about his take on the fiction writer match-up this week. How do you see the Faulkner-Vonnegut battle going? Does Vonnegut even get up from his recliner? Do you think The Mighty Duck Palahniuks concede the fiction spot? 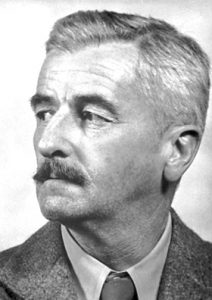 M.O. Walsh: Actually, I think The Mighty Ducks made the slicker move here in a number of categories. It’s too easy to give Faulkner the nod in fiction just because he’s in the canon, won The Nobel Prize, changed the course of literature, etc. But I actually think this match-up is impossible to predict. The thing is, both of these writers exist outside the normal space-time continuum. I’d imagine this to be invaluable for a blogger, not only in terms of perspective but also in sheer access to content. Vonnegut sits down to post something and he’s coming from where? 1945? 1969? 2081? That’s pretty wicked.

Still, if Faulkner truly believes “The past is never dead. It’s not even past,” then that means he’s existing in numerous times, as well. So, you’ve got quite the match up here. Of course, if Vonnegut still has access to Ice 9, then maybe that’s the trump card. Don’t like my blog? No problem. I’ll just destroy the world! On the other hand, Faulkner’s nimble handling of POV and the fact that he’s a still a ghost haunting the North Mississippi hill country (trust me on this) make him pretty formidable, as well. But this is really just the tip of the iceberg in terms of how competitive the contest between these two squads could be.

Commish: The Mighty Duck Palahniuks took advantage of their tongue-in-cheek draft strategy to run out to a quick lead in the quarterfinals. The Holden Caulbabies aren’t entirely humorless, per se, but manager Michael Nye definitely drafted more sincerely than Ben Samuel did. The good news for Nye is that Eggers’ youth might balance out the otherwise very talented, very well respected, very serious writers.

MOW: You think so? This confuses me. Is Eggers young? I feel like he’s been around forever.

Commish: Young, relatively speaking, of course—especially relative to someone like Montaigne, who really has been around forever. (And who, the commissioner must emphasize again, would definitely need a week or two to learn how to use WordPress.)

MOW: Also, are The Mighty Duck Palahniuks insincere or are they just smart? I know these often appear to be the same thing. At first glance, putting Emily Dickinson in Events Coverage may seem tongue-in-cheek since she was practically a shut in, but anyone who has read her letters to “Master” know that she had plenty of action going on between the ears and in her, ahem, bosom—and that’s the type of thing people want covered anyway.

Who needs more blogging on sustainable pescatarianism? Give me the types of events like Dickinson writes about, those that cover, “A love so big it scares her, rushing among her small heart—pushing aside the blood.” Yeah, baby. That’s good blogging. Plus, the fact that Dickinson has so clearly mastered the dash makes her prose a natural fit for online writing, Twitter included.

Commish: Speaking of Twitter… Although they are out of position, Melissa Broder and Roxane Gay present an epic Twitter confrontation. Gay has the numbers lead with 2,500 more followers, at around 7,500. But as we noted in the first round, Broder is far more efficient, having amassed her followers with a startling 2,300 tweets. They also bring different Twitter techniques to the table: Broder favors poetic nonsequitirs while Gay is more interactive and pointed, which reflects her work.

MOW: Good point. I might also make the case that Hunter S. Thompson seems a bit out of position as a Health and Living Columnist. I mean, I personally followed his advice in this regard for about two weeks as an undergrad and woke up with an STD, a live-in girlfriend who looked like a lizard, and about 65% of my organs outside of my body. It was fun, though. I’ll give him that. And we could use some more fun these days. So, I tell you, the more I look at this contest, the more evenly matched it seems. This is going to be a real slobber-knocker! I can’t wait to see the results.

Commish: We didn’t even get to talk about Bishop, Baldwin, and Herzog, which really shows how strong these rosters are from one to six. This match-up is too close to call! Tune in next week to see how these teams play out, and don’t forget to cast your vote on Facebook!