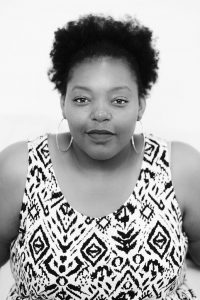 It’s hard to know where to start in describing the many ways that Mahogany L. Browne has given to the poetry community, and more broadly to the current cultural moment. Some of her long-standing contributions include founding Penmanship Books and hosting the Nuyorican Poetry Slam. More recently, she has worked as a Co-Organizer for #BlackPoetsSpeakOut, Executive Editor for The Offing, Director of Black Lives Matter at Pratt Institute, and Co-Editor of Breakbeat Poets: Black Girl Magic anthology. Out of necessity, Mahogany L. Browne has become her own revolution: she is one of those people who sees things in the world that need to change and actually makes real moves to change them. While there can only ever really be one Mahogany L. Browne, we’d be very lucky to have more poets/humans who are as fiercely visionary, hardworking, and resourceful as her.

In praise of Browne’s NAACP Image Award nominated collection Redbone (Willow Books, 2015), poet Evie Shockley writes, “A woman—a black woman—a high-yellow black woman” is shown in all her complexity as “breathing, dancing, cursing, loving, hurting, and surviving.” With Redbone, Browne carves out a space that celebrates black womanhood and resists gazes that pigeon-hole and tokenize. Her poetry, like her contributions as an organizer and editor, constantly seeks to push against walls that have historically boxed certain marginalized voices out of poetry publishing, as well as other structures of power.

Stevie Edwards: We’ve crossed paths a few times other the past five-or-so years, and I think the first thing I remember learning about is that you are the founder of Penmanship Books, which has published Danez Smith, Eboni Hogan, Joshua Bennett, Paul Tran, Camoghne Felix, and other prodigies of the page and stage. Could you talk a little bit about what led you to found Penmanship and what your current vision for the project is?

Mahogany L. Browne: I founded Penmanship after being rejected from several publishers. When I asked why I was rejected, as I thought “maybe I need to strengthen my manuscript…” I was told that my reach was not big enough. This was after my 3rd European tour. I was performing in sold out theaters and knew I had a market ready and willing to support my work. So Penmanship became an answer to the print community that told me I didn’t belong.

From that moment, I vowed to provide a well-made piece of art for the performance artist. Since then, I’ve focused more on the National Youth Poet Laureate program & Lincoln Center’s youth education program. Between those two, I am publishing almost 50 titles in one year. I am excited to publish a couple of international poets this year including Thuli Zuma and one of the top ranked poets on the scene, Falu.

MB: There are several ways in which space needs to be filled with the voices of people of color in the literary community. The editorial mastheads & the executive administration of literary organizations. If we do not have voices of color directing the lenses we are not doing our part. I’ve grown weary of folks talking about “diversity” but only tokenizing voices. I’ve seen it in publishing and I’ve seen it in higher education. When a college campus only invites me to their campus during February, I am clear: they are trying to check off a box. And that isn’t enough.

SE:  How has your long involvement in the slam community, particularly as a host of the Nuyorican Poetry Slam, shaped you as a poet and activist?

MB: Ten plus years in this community gifted me the sight of racism, sexism and classism. I was surprised that so many bodies stood up on stage and denounced these isms, then watched those same bodies walk into a bar and become the nightmares they “poemed” about. It is here where I learned to walk the walk or shut up. So I made it a point to create safe(r) spaces in my home venue. I made it a point to pledge allegiance to women of color (especially after I read “why are there so many “black” poems). And from those moments, I learned that the world outside that small slam world, needed tending too. I am grateful for the community. Because there are some amazing leaders and brilliant thinkers there. I have made friends into family there and found others willing to stand on the front of the battle lines with me.

SE:  As one of the Co-Organizers of #BlackPoetsSpeakOut, you helped to mobilize a widespread protest against the non-indictment of Officer Darren Wilson in the murder of Michael Brown, starting with YouTube recordings and growing into community events. I was wondering if you could talk about what this project has meant to you, and perhaps more broadly what it has meant to the community that has participated in it?

MB: #BlackPoetsSpeakOut was created out of urgency and as a response to the non-indictment of the Mike Brown’s murderer by Amanda Johnston, Jonterri Gadson, Jericho Brown, Sherina Rodriguez Sharpe & myself. This live and direct action became my life. The global reach. The need to stand with one another and speak into the silence. It has been life changing. It allowed my art to respond in a definitive way and service my community intentionally. I began as a poet and teaching artist working in schools, group homes and prisons. When I started Pratt’s MFA Writing & Activism program, I was hyper aware of what other methods my work and a socially active literary collective could do. BPSO became the salve, and allowed myself and hundreds of thousands of others to speak to their neighbors, their council members, their children and themselves. When the silence was deafening, BPSO refused to normalize it. We reached back into the literary canon, back to June Jordan and Audre Lorde; back to Amiri Baraka and James Baldwin and Langston Hughes and Jayne Cortez and Nikki Giovanni and Sonia Sanchez and Wanda Coleman and Claude McKay and that legacy, those poems, those blueprints they left us — illuminated the pathway to understanding and discussion.

SE:  What is #BlackPoetsSpeakOut working on as of late?

MB: We are still working on the video archive which can be utilized for classroom demonstrations and community engagements. Those videos are available here: www.blackpoetsspeakout.org . Folks are encouraged to record a video (cover poem or original), open with the mantra, and hashtag it on Youtube or Vimeo, and we’ll find it to add into the archives. We are presenting at conferences and colleges because the work is commonwealth. This work happened because artists and teachers and mothers and brothers came together to support each other with one of the most powerful forces, our voice.

SE:  The US has elected a President whose statements and actions undermine the dignity and rights of many Americans (i.e. people of color, immigrants, GLBTQ persons, women, people with disabilities). This might sound like a bit of a trite question, but do you believe that poetry (and other art) can help in some way? If so, how?

MB: I believe poetry is the entry way into the discussion that will demand the government uphold the laws and protect its citizens. Through poetry, we can blur the lines — we are everywhere. In classrooms, on television, in protests, in discussion with the global nation; and on and on. There is no place where poetry cannot exist. There are no public spaces where poetry can be easily ignored.

MB: The poets I turn to in no particular order: Amir Sulaiman, Sonia Sanchez, Audre Lorde, Amiri Baraka, James Baldwin, any given day someone from the Cave Canem directory and my daughter.

SE: What else is in the works for you? It seems like you’re always wearing a thousand very important hats.

MB: I’m working with Idrissa Simmonds & Jamila Woods on Breakbeat Poets: Black Girl Magic anthology. I’m directing the Black Lives Matter department at Pratt Institute. I am working with The Offing, Nuyorican Poets Cafe, NYU Slam Team & am newly minted as the Artistic Director of Urban Word NYC (a non-profit youth literary organization focused). I am lucky to write for a living and serve my community at the same time.