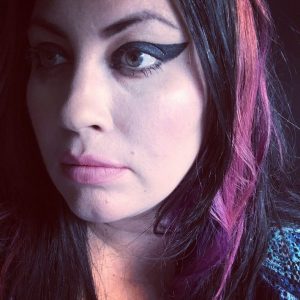 “The news desensitizes us to all the damage we do to each other, so let’s tell stories instead. I believe storytelling is the mightiest weapon in activism: it allows the narratives of the oppressed a chance to stand their ground.”
—Rachel McKibbens

Chicana poet, activist, and witchy folk hero of the disenfranchised, Rachel McKibbens is a two-time NYFA (New York Foundation of the Arts) poetry fellow and a legend within the poetry slam community for her brutally vulnerable and masterfully crafted poems and performances. She is a feminist, mental health awareness advocate, and an outspoken voice against police brutality. Both of her full-length poetry collections—Into the Dark & Emptying Field (Small Doggies 2013) and Pink Elephant (Small Doggies 2016, 2nd edition)—have found their ways into the monthly bestsellers lists at Small Press Distribution, often treasured as survival guides by many sexual assault and domestic violence survivors and people living with mental health challenges. Some of her most widely circulated poems include “Letter From My Heart to My Brain” and “untitled” (aka “Last Love”). She has appeared on hundreds of stages nationwide, including HBO’s Russell Simmons Presents Def Poetry, The Dodge Poetry Festival, Split This Rock, and The Getty Museum.

The breadth of Rachel McKibbens’ creative work as both a poet and an activist resists summary, but if there’s one thing I were to praise about her, it would be her visionary capacity to create spaces in which those excluded from the dominant cultural narrative are able to feel seen and heard. She creates these spaces of witness with her feral and boundary-pushing poems that speak unflinchingly of topics often swept under the rug (rape, domestic violence, body shaming, mental illness, prejudice) and with her work as a poetry organizer. In 2012 McKibbens started Pink Door, an annual summer writing retreat that she runs out of her home for women and non-binary writers of color. Picture a living room floor lined with air mattresses and laughter, tents staked throughout the yard, a retro camper trailer named Loretta, church pews and a pulpit on the back deck for nightly poetry readings. Picture a space without shame, a space with loud voices. This retreat has been attended by many rising stars who are challenging the status quo of the poetry landscape, which is to say a landscape historically dominated by white males of a certain class with degrees from the right universities. Rachel McKibbens is currently touring across the country with The Outlast Project: A cross country poetry & healing art movement, which aims to empower survivors of sexual assault.

When I’m preparing to tell a story, my primary goal is to map out its truth. I’m not so much looking to convey a message as I am working to close a wound; I am a Chicana woman living with a mental illness, I am a sexual assault and domestic violence survivor and I write through that lens. My writing aims to confront the monsters, to coax them into the light. If I can draw the reader into a position of witness, I have a better opportunity to diversify perspective. As listeners, it is up to us to fix what is wrong. The news desensitizes us to all the damage we do to each other, so let’s tell stories instead. I believe storytelling is the mightiest weapon in activism: it allows the narratives of the oppressed a chance to stand their ground. This is what invokes change—becoming familiar to the outside world—making ourselves harder to kill.

Q: It’s hard for me to think of a poet who is as dedicated to speaking out against injustices and speaking up for the disenfranchised as you. Not to get too corny, but sometimes when I need to feel a little braver, I turn to your poems. I was wondering what poets (or other artists) inspire/challenge/buoy you?

I will always, always, consider Sonya Renee Taylor the catalyst for my activism. She shaped my critical eye and provided the tools to be a better listener. Sonya is a phenomenal writer and tireless social justice warrior who doesn’t allow anyone to be ignored. Safia Elhillo, Jan Beatty, Chrysanthemum Tran, Dominique Christina, Siaara Freeman and Mahogany L. Browne are the living writers I turn to most these days when I am feeling swallowed by the world. Their work is large and vulnerable and risky as hell. Their commitment to social justice comes in their refusals to allow their histories and voices and bodies to be erased. They are teaching me the language of love and resistance and how to hold my power—how to love the body instead of survive it.

Q: Can you tell me a little about the annual Pink Door writing retreat that you run out of your home for women and non-binary poets of color? What led you to invite dozens of poets to camp out in your home and backyard in 2012? What are your current hopes for the project?

I started Pink Door for completely selfish reasons. I was hungry for sisterhood, my writing starving for connection. Ever notice how eager men are to mentor a woman’s work? The first six years writing poems, I only ever had male mentors. This was also my fault. I’d always found it difficult to identify as a woman. I was raised by men, learned how to bond by objectifying women. Misogyny was my currency, my safety net. The years of violence I endured as a young girl made me feel so trapped and resentful. I hated my body, hated feeling like a hunted gender. Everything I did was masculine-centered. Thank god for the brilliant women of the poetry slam movement: Lucy Anderton, Angela Boyce, Patricia Smith, and Alexis O’Hara, to name a few. Their stories taught me how to love and trust women.

Pink Door recently celebrated its fifth anniversary. Truly, all I want for it is to stay exactly as it is, today: a kind of rogue writing retreat and literary coven. My next step is to get it out of my house, so our late night cackling doesn’t disrupt the boring lives of my conservative neighbors ::gag::

Q: What other projects are you working on right now? I know you’re always cooking up new brilliant things.

I’m still touring with The Outlast Project, an interactive poetry and healing arts tour designed to empower survivors of sexual assault. I have about nine months left on the road with that before I create its installation—hundreds of survival shrines and a cross-country exquisite corpse poem. In the fall, I’ll be touring alongside poet and activist Dominique Christina as Mother Tongue. We have big mouths and nine kids between us. It made sense.

Q: If you could give a challenge to the poetry community at large, what would that challenge be?