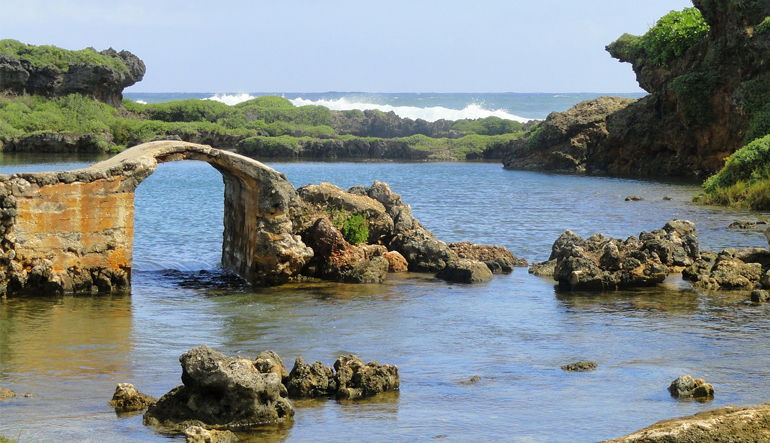 I first encountered the work of native Chamorro poet Dr. Craig Santos Perez the way one might encounter underground music or some sort of clandestine decolonial communique: through word of mouth, through a friend of a friend, through a tracing. I was reading up on the trans Thai poet Jai Arun Ravine’s work and discovered that Perez had edited Ravine’s first book with Tinfish Press. I was humbled by Perez’s critical generosity and his commitment to making space for writers of color like Ravine. What this signaled to me was an ethnic studies practice of solidarity. Immediately, I sought out Perez’s poetry and found within it a dexterous remixing of the settler colonial archive, a deeply lyrical autobiographical sensibility, and a sustained commitment to the decolonization of literature, history, his native Guam, and other mappings.

Perez’s historiography of Guam is what he calls an “uprising of meaning,” a continuous rearticulation of an indigenous decolonial imaginary. In Perez’s work as a poet, scholar, educator, and editor—he is the recipient of a Pen Center USA/Poetry Society of America Literary Prize and an American Book Award, an assistant professor of English at the University of Hawai’i at Mānoa, the co-founder of Ala Press, and the series editor for the New Oceania Literary Series published by the University of Hawai’i Press—we have a generative model for the poetics of critical ethnic studies scholarship. I spoke with Perez about his intellectual trajectory, his relationship to the archive, and how ethnic studies continues to inform his many practices.

Jason Magabo Perez: Would you mind sharing a little bit about your intellectual trajectory?

Craig Santos Perez: I wrote my first book of poems as my MFA thesis. The book was about the politics and history of my homeland, the Pacific Island of Guam, as well as my own family’s cultural stories, and the struggles of our native Chamorro people. After completing the MFA, I became interested in ethnic studies because I wanted to learn more about race, culture, colonialism, migration, and indigenous identity, which were themes I explored in my poetry.

JMP: So you were already exploring themes that animate ethnic studies even before you began explicitly engaging the field. I’d most definitely include your first book (and the rest of your ongoing archive about Guam) in my contemporary ethnic studies bibliography for its attention to decolonization, militarism, cartography, and talk-story. What was your experience like training in ethnic studies while developing your poetic practice?

CSP: At first it was a challenge to transition from reading and writing only poetry for two years to reading ethnic studies scholarship and writing academic essays. I struggled to balance the creative and critical writing, and I struggled to manage both a poetic and theoretical vocabulary. As time went by, it became easier to be both a poet and scholar, and I think my poetry deepened as my knowledge of ethnic studies deepened.

JMP: What do you feel deepened in your poetry? Was it theoretical? Methodological? Both?

CSP: My methodology became more fully immersed and grounded in research and archives. Since I was doing research for academic essays, I wanted to find creative and poetic ways to weave the research into my poems. My work became more “documentary.” I think my representations of culture and identity became more complex and layered, and the politics in my work became more critical and pointed. There’s a poem titled “from ta(la)ya” in my third book that is perhaps the best example as it interweaves academic essay, collage, historiography, memoir, and ethnography in a lyrical interrogation of militarism, indigeneity, migration, and religiosity.

JMP: We encounter in ethnic studies scholarship a broad sense of what it means to work with archives. Archives and their attendant silences and absences mark a site where we begin to address the historical violences of empire. I really dig that part of your conversation with Donovan Kūhiō Colleps in which you reflect on documentary poetics. “The documentary mode,” you say, “offered a model of how to textualize talk-story, and thus how to write the immense depths of my homeland.” Prior to training in ethnic studies, you were already meticulously handling archives, as evidenced in your first book. How did the intellectual community that you encountered in ethnic studies challenge or refine your orientation toward the archive? How did engaging historians, social and cultural theorists, literary critics, geographers, and sociologists inform how you do what you do?

CSP: In the ethnic studies program I attended, part of our training was in cultural literary studies, so literature was valued as an expression of racial identity. In terms of the archive, our training involved research in various kinds of archives, as well as with oral interviews. We read texts that engaged in different archives and ethnographic approaches. This influenced me to explore the aesthetics of the archive and archival materials, and to think about how poetry and the poetry book can itself become a creative archive.

JMP: That’s fresh: the poetry book as archive. Can you say more about how this understanding has carried out in your poetry projects thus far? Has the archive or your conceptualization of the archive shifted from project to project?

CSP: Thinking of my poetry books as poetic archives gives me permission to include materials that others might not deem “poetic,” but that I imagine as part of a documentary and archival poetics tradition. Moreover, I take seriously an important tenet of ethnic studies: research within marginalized archives and suppressed histories is important, but it is even more important that scholars bring our research to our communities, who may not have access to the archives. Thus I view my poetry projects as a creative way to bring the archive to my community and the larger public. This has shifted my perception of my project into something that is poetic, scholarly, and pedagogical.

JMP: I’m excited to see what you do as editor of the New Oceania Literary Series with University of Hawai’i Press. It’s a much needed initiative to amplify Pacific literatures. In terms of Pacific Islander studies, ethnic studies, and poetics, whose work do you find your poetry, editorial, and scholarly projects responding to or engaging with?

CSP: I’m excited as well to work with the University of Hawai’i Press to bring more Pacific literature to the world. Our first anthology, on Micronesian literature, is forthcoming this year, and we have anthologies planned that focus on Pacific literature and food, the environment, futurism, LGBTQ, and playwriting. I see my various projects engaged with other minority and indigenous poets, editors, and publishers who have written their people’s stories, edited anthologies to bring their people’s voices together, and started their own presses to house their people’s books. Most directly, I envision the work I do in the literary genealogy of Pacific poets/writers/scholars, including Albert Wendt, Epeli Hau’ofa, Steven Winduo, Robert Sullivan, Witi Ihimaera, Haunani-Kay Trask,Vilsoni Hereniko, Konai Helu Thaman, and Brandy Nalani McDougall.

JMP: What are a few other things that you have learned along the way about the relationship between ethnic studies and poetry?

CSP: An important lesson I learned is that poetry is a powerful way to express the complexities of race, ethnicity, gender, culture, and identity. As a writer, the more I understand these complexities from a theoretical and historical perspective, the deeper my poetry will become. To reiterate some earlier points, I also learned the importance of archives and that poetry can be a space to establish, circulate, and safeguard marginalized archives. Ethnic studies has taught me the importance of being involved with politics, and my poetry is now interwoven with political issues; social and environmental justice; and decolonization and sovereignty movements. Lastly, I learned the importance of community engagement, which is a defining ethic of ethnic studies. This has led me to become an advocate and activist within the Pacific Islander community and the literary arts community.