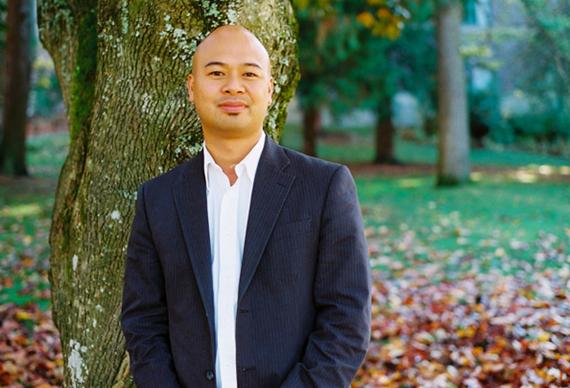 Oliver de la Paz is the author of three collections of poetry, Names Above Houses, Furious Lullaby (SIU Press 2001, 2007), and Requiem for the Orchard (U. of Akron Press 2010), winner of the Akron Prize for poetry chosen by Martìn Espada. He co-chairs the advisory board of Kundiman and is a recipient of a NYFA Fellowship Award and a GAP Grant from Artist Trust. His work has appeared in journals like Virginia Quarterly Review, North American Review, Tin House, Chattahoochee Review, and in anthologies such as Asian American Poetry:  The Next Generation. He teaches at Western Washington University.

In graduate school, I worked as an assistant editor for Crab Orchard Review and one of the best aspects of the position was assisting Managing Editor Jon Tribble with the Crab Orchard Series in Poetry. It was through the contest I first read Oliver’s work and I’ve been a fan since then.

Part of my job at the time was to help copy edit the winning manuscripts. Jon and I began the copy-editing process by reading the poems aloud: punctuation, spaces, stanza breaks, everything. Synthesizing poetry in this way is complicated, but in retrospect, we were reading Oliver’s work in the kind of holistic manner poetry should be read. Oliver’s book needed very little copy editing, so I was able to spend my time focusing on the sounds of words and the cadences of his language.

Oliver’s work has evolved dramatically in the last eleven years, but I have continued to read his poems with the same kind of consideration I did while copy editing. His poems are so multifaceted, so specific in their mechanisms, that reading them in their typographic entirety becomes the best way to experience the work.

If I was to try to sum up all that is going on in Oliver’s stunning new collection, Requiem for the Orchard, I would say it is a meditation on youth and what it means to be an “other” inside of a geographic space that is traditionally “American.” A space full of small towns and football games and pick ups. But that summary would seriously short change the scope of the book.

So let me say this. One of the many things I admire in the collection is Oliver’s vision of how language and imagery work in concert to create the moment we know as “poetry.” Like these lines, from his poem, “Insomnia as Transfiguration” in Requiem for the Orchard:

The scar on my neck, clarity—two curtains sewn.
A little door locked from the inside.

I also admire the tenacity and breadth of Oliver’s imagination. It’s on full display in all three of his books, but you get a real sense of it Requiem for the Orchard. Check out these lines from one of the poems titled “Requiem”:

And what salt? What hard cake on the hat brims? Our sweat
gummed up the works, made us thick and slow-witted…

“Thick” is an appropriate description of the poems in Requiem for the Orchard. They are thick with memory, with music, with resistance. They are poems best read with that kind of slow consideration we usually reserve for editing. And if you read this work respectfully, the poems will reveal themselves completely like the very highway towns some of the verse is set in.

With that, here’s my conversation with Oliver de la Paz. Thanks to NCAA basketball and obligations to our children, this conversation began February 12, 2011 and wasn’t finished until March 15, 2011.

I remember a conversation we had a long time ago about writing and distractions. I think it was when you were working on the poems in Furious Lullaby. Back then, you didn’t want to get an Xbox because you knew it would take away from your writing time. Too much Halo II. For me, it was Madden 05 on the PlayStation that kept me away from my writing desk. Now we’ve both got children on the scene and they are a different kind of distraction. Instead of long stretches of writing, I find myself having to create in snippets between helping my kid put the red high heels on her Barbie. Can you talk about how your writing process changed since you became a dad?

There’s a particular quest in Red Dead Redemption that requires the hero to slay a grizzly bear with nothing but a deer-hunting knife. I can’t tell you how many times my character got mauled by grizzlies. I’d have the health bar down on one grizzly, spin around, and there’s another grizzly steam rolling me until the YOU DIED message appears in big red letters. So, I’ve given up video games for a spell. I’d play late at night after the kids were put to bed but got so stressed out by the grizzlies that I wouldn’t be able to sleep on teaching nights.

Psychologically, I needed to unwind—to do something mindless after a day’s worth of teaching and lecturing, but lately I’ve stopped getting mauled by grizzlies and started reading again. The bulk of my game playing usually happens around the fall, when school is just starting up. I don’t write at all during the fall. I see the fall as a curatorial season—I send my work out, revise, etc. I’m too busy with administrative, scholastic, and parental duties to bring myself to the writing desk.

Right around the winter I start to get cranky and I start to accumulate books to reload my brain. Stuff to get me back into the mindset of getting back into the writing desk. Then in the spring and the summer months, I start composing new work again. It wasn’t always like this, of course. Prior to the kids, I had the ability to write at any time I wanted, but sadly in retrospect, I know I piddled much of that time away (playing video games). I find that I’m more economical with my time and my work. Certain pieces have certain priorities. I’m better at triage, I suppose.

That frustrating grizzly is exactly why I stick to playing sports video games. My Colts will eventually beat the Saints, no matter what happened in the Super Bowl. And even though it doesn’t really mean anything in the long conversation, it always makes me smile to hit stick Reggie Bush. I wonder if there isn’t a writing equivalent to that video game grizzly bear. I mean, what thing is there in verse that constantly bumrushes a poet? I thought form at first, but it wounds more than it crushes, and for some poets as dexterous as you, form can invigorate the text.

So maybe it’s something wholly different, like prose. Every time I try to write something longer than a couple of pages, I run out of words. It might not be YOU DIED, but it is certainly a slow kind of going out: the music disappears, the pop disappears, the want for images gets faint. Have you ever written any prose? Names Above Houses was all prose poems, but I’m talking about the long-winded margin-to-margin type of text.

Over the past year I’ve been trying to write essays. They’re essays about fatherhood, cancer, immigration. They’re meandering biographical pieces about the experiences of my family and growing up in the Eastern Oregon farmlands. What’s become clear over that course of time is that there’s a particular spatial quality that I require in my own writing. I need to be able to “see” my own thoughts, and there’s something that inhibits my ability to process what I’m saying in long “strands” of prose. So my prose writing winds up being more like short bursts of prose, offset with a break or a deep spatial gap.

I can only sustain a block of prose for so long before my eye requires a place to rest. Brenda Miller, one of my colleagues here at Western Washington, is really fabulous at writing braided essays, so I’ve been modeling my attempts at the essay after her writing. I haven’t quite gotten the hang of the form, but I understand a little more each time I try to craft one. Regarding what I had said earlier about my spatial requirements on the page, I’m finding that I’ve fallen into a habit with the couplet—I favor them when I’m composing. It’s easier to “see” what I’m saying. More to the point, if I am ever to hunt those grizzlies in the video game again, perhaps I should lure them out of the forests and into the open plains.