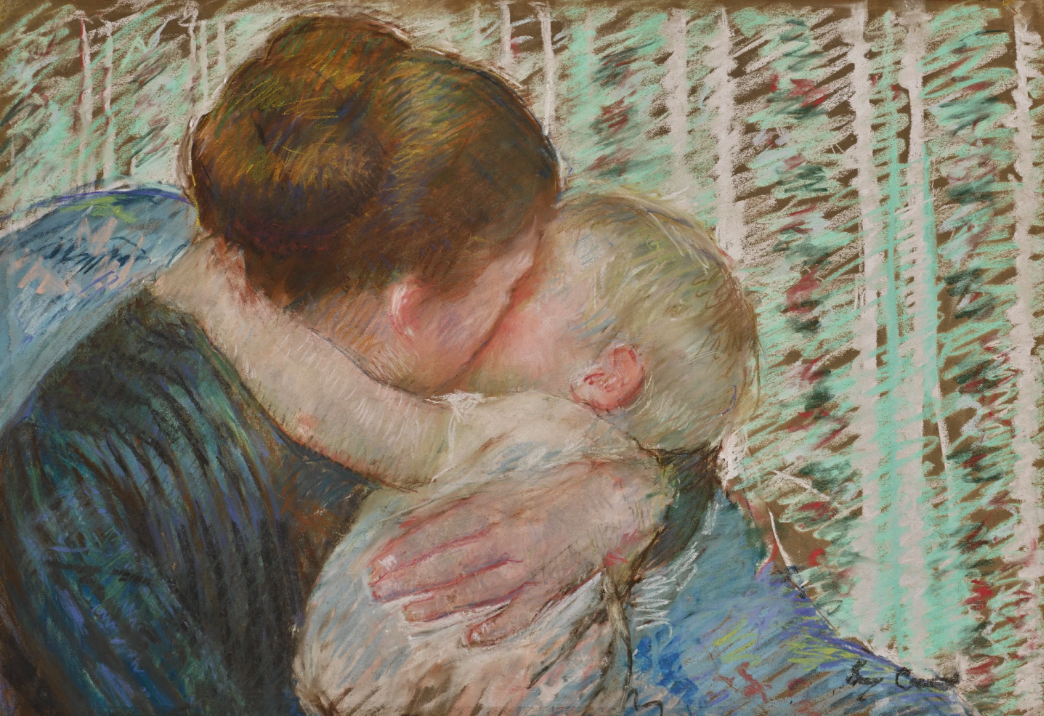 I have always loved reading descriptions of mothers and their unavoidable forcefulness. I’m drawn by the way in which the cerebral and the bodily clashes within them as they navigate love and grief, simultaneously cleaving to the roles assigned to them and cleaving from them. “I am my own housewife, my own breadwinner,” asserts the narrator of Megan Mayhew Bergman’s “Housewifely Arts,” featured in One Story in 2010.

The piece is a journey in miniature: the mother and her son are southbound on I-95 in pursuit of her deceased mother’s African Gray parrot, Carnie, “an ebony-beaked wiseass” who holds within him her mother’s voice and is now at a ramshackle roadside zoo. Alongside the narrator’s grief for her mother, which is partly wrapped up in the loss of her childhood home, she bemoans her seven-year-old son’s impending loss of innocence, which makes the story a densely packed capsule of loss that is as much about the loss of her mother and her own childhood as it is about being a mother herself.

The narrator describes her son as a “forty-three-pound drama queen, a mercurial shrimp of a boy who knows many of the words to Andrew Lloyd Webber’s oeuvre.” She recognizes that he’s on the cusp of experiencing the world’s meanness, which she is unable to prevent him from experiencing. When they pull into a rest stop, she acknowledges that he is now too old to be taken into the restroom with her and must brave the men’s restroom on his own. “I release him, let him skip into the fluorescent, germ-infested cave, a room slick with mistakes and full of the type of men I hope he’ll never become,” she says, as if the memory of these other men could poison him like an airborne virus. Even as she yearns to hear her mother’s voice again, she feels acutely her own mothering.

When they get back in the car, the scene shifts to the narrator grappling with her grief about her mother and the parrot that has become her proxy, though the parrot is visibly indistinguishable from the other one she had seen at the zoo. “Beneath this wall of gray feathers is the last shard of my mother, and I feel myself growing increasingly desperate,” she says as the parrot remains silent. “How thick was her accent? Was her singing as beautiful as I remember? She always spoke sweetly to Carnie, and I wanted to hear that sugary tone, the one she hadn’t used with me in her last years.” Carnie’s role shifts here—he becomes a window into the way the narrator’s mother treated her when she was a child, loving her uncomplicatedly. Things had long since become complicated between them; when the narrator said to her mother before her death that she wasn’t obligated to care for Carnie, her mother replied, “Well…I’m not obligated to look after you.” The clipped sentence struck the narrator so forcefully as untrue—not even an option—at the time that she felt the words as “a splinter in [her] chest.” Later, however, she realizes that their “love had turned into a bartering system, a list of complicated IOUs.” Then her mother is gone, reduced to a voice inside a parrot who won’t let it out.

In defeat, the narrator goes to her vacant childhood home and breaks in. Its interior is so decayed that her son starts to cry out of fear. Despite the state of the house, the narrator remembers her mother as she was: a proud and resourceful homemaker. She decides to strip the wallpaper from the walls, later re-pasting them in her own house. She uninstalls her mother’s hand-sewn and cobweb-strewn window treatments, then reinstalls them in her own home. “I hunger for the person who birthed me, whose body, I realize, after becoming a mother myself, was overrun with nerve endings that ran straight to her heart, until it was numb with overuse, or until, perhaps, she felt nothing,” she says, feeling her own nerve endings rubbed raw again and again as she stares down the harshness of the world barreling toward her son. She recalls her mother saying, “My heart…I can turn it off,” but realizes the falsity of this statement. “I know the truth now,” she says. “What maniacs we are—sick with love, all of us.”

Sarah Shun-lien Bynum’s “The Bears,” published in Glimmer Train in 2015, begins with an equally punchy line: “Once, when I was convalescing, I was sent to a farmhouse in the country. No one there knew I had been sick.” We learn not long after that the narrator has traveled to this farmhouse for a writer’s retreat where she’s meant to be working on her manuscript about William James. Instead, she’s grieving her miscarriage and William James has “turned into a man [she] barely knew. His sudden disappearance made the days seem long.” Rather than write, she takes to the country roads in “a part of the countryside that had yet to be discovered and made over in a sentimental way.” Yet the idea of a child is never far. While walking, she faces her own ignorance of the flora around her. “If there had been a child walking alongside me, its hand in my own, and if this child had shown any curiosity about the world, I would have been able only to say, That is goldenrod. And that, Queen Anne’s lace. It would have been a poor display of knowledge.” Her thoughts go first to a child—she never calls it hers—but the tenuous idea of motherhood is present. Unmoored by the miscarriage and the life she left behind, the writer becomes tethered by this absence and how it manifests in this landscape. She becomes enamored with the house of a celebrity, Jerry Roth, which she often passes, and describes his “apple tree, crooked with age, its lowest branch dipping only a few feet from the ground, extended as if in invitation to a child to take a seat.” The lost possibility of motherhood becomes a lens through which she views everything. Again, her mind turns to how a child would fit in the landscape. She imagines a family living in the house, an alternate life so removed from hers.

Later, inspired by her fellow writers, she runs through the countryside and feels as if she is “a child running ecstatically, for no reason at all.” Instead of being child-like, however, her period begins unexpectedly—her first since the miscarriage—and it is a shock to her that her body still deigns to work in this way after its betrayal. “Foolishly, I had not been expecting it,” she says. “In the deepest part of me, I had not believed that my body would return to normal, or that one day I would be well again.” Once her body restores to her the possibility of motherhood, her spirit begins to heal as well. Her imagination shifts from child to homemaking. She feels emboldened by her crisis to enter Jerry Roth’s home when his door swings open from her knock. The house is empty, and she takes it in from this new perspective: “Sitting at Jerry Roth’s table, I felt suddenly that I’d spent my adult life engaged in the most impoverished kind of making. What did I have to show but lecture notes, a short book on other books, comments in the margins of seminar papers, an occasional terrarium? It occurred to me then that to make a kitchen like this required a breadth of imagination I might not be able to summon.” Her body’s possibility eclipses what was there before (books and writing) with the promise of something more (a baby, family, and the cult of domesticity it engenders). “Why something that not only ended but began in an accident should have so undone me—but, well, it did,” she reflects. When she returns to the city, she and her “friend,” as she’s thought of him, enter into a new relationship, have two children together, and move to the country. The writer learns to (sort of) negotiate mothering two young children at once, two children’s hands to hold in hers; the homemaking she’d fathomed in Jerry Roth’s kitchen has been made real—as if willed into existence—supplanting who she’d been before the trauma of the miscarriage.

Lorrie Moore depicts another writer-mother navigating grief over her child, in “People Like that Are the Only People Here: Canonical Babbling in Peed Onk,” published in her 1998 collection, Birds of America. Told from the third person perspective, with the family members referred to as “the Mother,” “the Baby,” and “the Husband,” we see the Mother find a blood clot in her son’s diaper and learn, soon after, that he has kidney cancer. While the story is partly about the Mother navigating her grief and the Baby’s cancer treatment, it’s perhaps even more so about her newly shifted sense of self: “In her other life, her life before this day, she had been a believer in alternative medicine. Chemotherapy? Unthinkable. Now, suddenly, alternative medicine seems the wacko maiden aunt to the Nice Big Daddy of Conventional Treatment. How quickly the old girl faints and gives way, leaves one just standing there. Chemo? Of course: chemo! Why by all means: chemo. Absolutely! Chemo!” In the blink of a diaper change, not only has the Mother’s identity shifted, but so has the Mother’s worldview. She’d once bantered with friends about “her ongoing complaints about the very vocabulary of motherhood, how it degraded the speaker,” but is sickened now by how quickly the use for this vocabulary might be stripped from her. “Healthy?” she’d joked after the Baby’s birth. “I just want the kid to be rich.” Now, of course, the opposite is very much true.

The Mother’s experience is outside of the realm of what had once been possible, and believable, for her life, and challenges her identity as a mother instantly. Other core parts of her identity, too, are challenged by the Baby’s diagnosis, though more ambiguously. When her husband urges her to take notes so that she can write about the experience later, she says, “I do the careful ironies of daydream. I do the marshy ideas upon which intimate life is built. But this? Our baby with cancer? I’m sorry. My stop was two stations back. This irony at its most gaudy and careless…This is a nightmare of narrative slop.” To the Mother, the event is unrealistic—as is her place in it. She is inherently different, she feels, from the other mothers on the “Peed Onk” ward, and being unable to fit in with them is another indicator that the Baby’s cancer is unacceptable: “The Mother does not know how to be one of these other mothers, with their blond hair and sweatpants and sneakers and determined pleasantness. She does not feel remotely like them. She knows, for instance, too many people in Greenwich Village. She mail-orders oysters and tiramisu from a shop in SoHo. She is close friends with four actual homosexuals.” Of course, just as the jokes she once told have become empty of humor, so too are tiramisu and ties to Greenwich Village cast aside in favor of what circumstances demand. The Mother finds herself in sweatpants fighting fiercely for her child’s life from his bedside. In the end, all three are able to leave Peed Onk together, going home and continuing with their life, albeit one that has taken on a new dimension.

Moore’s mother and Mayhew Bergman’s and Bynum’s are transformed by grief, their ideas of motherhood complicated by the crises that befall them. They are remade by their nerve endings being rubbed raw forever, unable, as they are, to stop what the world hurls their child’s way.