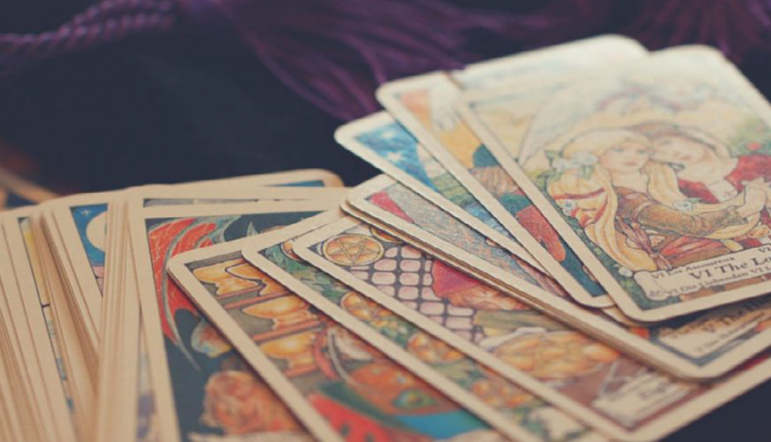 What can you trust of what you can’t see?

By asking this open-ended question as the last sentence of his essay “The Querent,” Alexander Chee relinquishes the power of interpretation to his readers while, in the same moment, rendering us powerless, sending us scrambling for an answer he already suspects might not exist. To make sense out of the unknown that exists in our futures, we search for ways to take power. In “The Querent,” Alexander Chee reveals that he has found in Tarot cards a way of taking power.

Arriving at Wesleyan University as a college freshman, raw from the loss of his father after a severe car accident, Chee says he got into Tarot because he “wanted one of those mirrors that could be used to see around corners.” He “never wanted to be surprised by misfortune again.” In Tarot cards he found a tool that could enable him to take power over a life that had rendered him utterly powerless. From an early age, we are taught to believe that taking action equals taking power, whereas waiting for something to happen equals a state of powerlessness. So, Chee took action.

An honestly acquired Tarot deck is one given to you as a gift. But instead of waiting for the gift to be presented to him, Chee asks a friend to buy a deck of cards and then give it to him. “I wanted my gift when I wanted it, which was right at that very moment,” Chee explains. Holding the deck of cards in his hand made him feel exultant, “just the sort of power [he]’d hoped for.”

At the same time, however, it is clear that below the surface is a feeling of having done something wrong; mixed with power is powerlessness.

As if the Tarot cards somehow know they had been dishonestly gifted, they refuse to yield their power to Chee when he does his very first reading for the friend who had purchased the cards. In that reading, the card of the Tetragrammaton appears. The Tetragrammaton are the four letters that replace the name of God for those whose beliefs prohibit them from calling God by name. Slightly unnerved by the appearance of this card, Chee and his friend decide to do a second reading and then a third. In each reading, the Tetragrammaton appears, always in the same exact location every time. The repetitiveness of this card in particular was beyond the improbable, Chee writes. It seemed as if the cards were mocking him in what felt “almost like a snarl.”

Chee returns to this dynamic between power and powerlessness several other times in the essay, revealing how these two emotional states can exist simultaneously. When Chee first arrives at Wesleyan, he uses money from the trust fund that was set up for him following his father’s passing and buys himself an ostentatious car. The purchase of the car can be seen as a display of power through conspicuous consumption, but, as in the case of the Tarot cards, there is no power behind this display. Money is finite, especially money that has been given and not earned. The car attracts the attention of other students, but Chee deliberatively dismisses them; there is power in dismissing someone who approaches you, but we are powerless to make them come back.

With the benefit of hindsight, Chee realizes that what he sought from the Tarot cards was “to feel powerful in the face of [his] fate,” using them to satisfy a need “to look over the top of [his] life and see what was coming.” But Chee ultimately concludes that Tarot cards are a mirror showing us the possibilities of the present rather than predicting certainties of the future.

This developing relationship to Tarot cards mirrors what New York Times literary critic J. W. McCormack has identified as a coming-of-age chronology in Chee’s essay collection, How to Write an Autobiographical Novel, of which “The Querent” is a part. Together, the overall arc of the collection and the individual arc of “The Querent” create a double-arced coming-of-age story. Seen from the angle of this double arc, the dynamic between the collection and the essay replicates the dynamic between power and powerlessness.

A triple arc, however, becomes visible when we take into account the following quote from “The Querent” regarding the conventional narrative arc of a personal essay. Here, Chee reveals a parallel between the personal essay as genre and the cards he has drawn for the Tarot reading he will be getting for the sake of writing “The Querent”:

It was a “good” reading for a querent to get, I noted as I looked them over, with the querent rising out of his utter defeat, an ascension. It was also, I noticed, like the conventional narrative of most personal essays: an author struggles with his bondage to something he came to as a result of a defeat in his past, and emerges with abetter sense of his present place in the universe.

This parallel between a Tarot card reading and the arc of the personal essay demonstrates the dynamic of the triple arc, the first arc being that of the essay collection as a whole. The collection begins with Chee as a young exchange student in Mexico, continues with Chee as a young gay man searching for his identity and place in the world, and ends with an essay about the responsibility of the American novelist as a conscious citizen. The second arc is “The Querent” itself, which begins with Chee as a seventh grader convinced he has psychic powers. The defeat of the essay’s narrative is the passing of his father and the contentious early relationship between Chee and Tarot cards, with Chee demanding access to the cards the way a petulant child demands a birthday gift. Ultimately, Chee ascends, and the essay ends with an open question about the unknowable future. The third arc is the Tarot, represented by the ascension out of defeat displayed by the cards drawn by Chee as the querent, as well as by the internal organization of a deck of Tarot cards. The question Chee wishes to have answered in his reading for the sake of the essay concerns his personal relationship to the Tarot. As the second arc demonstrates, this relationship has not been straightforward over the years.

The Tarot cards themselves are organized in a narrative arc, similar to a coming-of-age story and a story of ascension out of defeat. In a Tarot deck there are two kinds of cards: the Major Arcana and the Minor Arcana. The Major Arcana constitutes a narrative arc called The Fool’s Journey. “The Fool passes from Innocence, in the first card,” Chee explains, “to the mastery represented by The World, which is the last.” The Minor Arcana consists of cards that represent human desires, such as money, intellect, creativity, and emotions. As the cards are laid out on the table, “each card acts as a separate scene or chapter within a larger story,” Chee says, “and as you go through the reading, you create a relationship between them.” Could this arc of ascension out of defeat be the reason why the ongoing renaissance of the personal essay shows no sign of abating? In a world dominated by an increasing sense of powerlessness, the personal essay as genre tells the story of a powerless person taking power. A classic coming-of-age story.

In “The Querent,” Chee states that “you only think you want to know the future, until you do.” We crave power over our lives, until that power is granted to us. Once we know in which direction we are heading, we lose the power to change the course. Instead, it is in the relinquishing of power that we grow powerful.

“Perhaps the only way to escape your fate is not to know it,” Chee muses. How much trust do you have in what can’t be known? Ask yourself.

Tags:Alexander Chee, How to Write an Autobiographical Novel, personal essays, Tarot, The Querent