Home
»
Book Reviews
»
Private Tutor to the Stars: On THE HOOPS WHISPERER by Idan Ravin 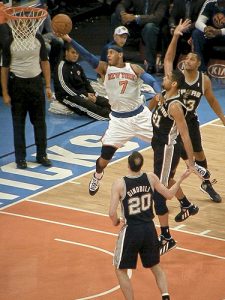 Even this man needs a tutor for the subject he knows best.

The Hoops Whisperer: On the Court and Inside the Heads of Basketball’s Best Players
Idan Ravin
Gotham Books, 2014
246 pages

As a national champion during his only year of college, as the third overall pick in the NBA draft, and as a recipient, this summer, of a five-year, $124 million contract from the New York Knicks, Carmelo Anthony has spent his entire adult life playing elite basketball, and under the brightest lights of public scrutiny. Anthony has averaged at least 20 points scored per game in each of his eleven NBA seasons and has already earned an estimated $135.8 million in team salary, with untold millions more coming from endorsements and additional investments. Carmelo Anthony’s life couldn’t be more different than yours and mine if he were living on a different planet.

A modern basketball player who is this successful at his or her craft has, inherently, a set of responsibilities that extends far beyond his or her exploits on the basketball court. Take this Nike commercial featuring Anthony, nearly a decade old now. The rapid-fire montage of a day in Anthony’s life shows Carmelo making public appearances, getting hounded by autograph-seekers, and taking meetings, all between training sessions on the basketball court. Since Anthony played in Denver when this commercial was shot and has since moved to major-market New York City, his life really does feature this much perpetual activity–including taking time for filming the meta-scenes of this commercial–and this much being the center of everyone’s attention:

In this commercial, during the moments when Anthony is on the court, an unassuming man with a shaved head works out Anthony, tossing tennis balls at him while he dribbles and sending Carmelo through a battery of shooting, dribbling, running drills. It would have been easy for Nike to simply cast an extra as Trainer Man, but, admirably, this man is Idan Ravin, and Ravin is a personal trainer to Anthony and a whole host of other elite NBA stars.

Ravin boasts no formal qualifications as a player or trainer but he holds a whole bunch of de facto ones. Ravin should be considered one of the brightest minds in all of professional basketball, and he is entirely self-taught. I first heard of Ravin, as did most people outside of basketball’s most elite inner sanctums, from a profile of him written by Chris Ballard in Sports Illustrated in 2009. Immediately, I thought, “This man has the best job in the world.” As a freelance tutor who doesn’t advertise–who doesn’t even have set rates for his workouts–Ravin has built his career from the world’s best basketball players endorsing him via word of mouth.

Ravin’s workouts are short, hyper-intentional, and hyper-intense. An NBA coach can run a three-hour practice full of yelling, endless and mindless sprinting, and micromanaging, and the players have to be there regardless of how well the practice is run. Nobody is required, however, to work out with Ravin. But from Anthony to Dwight Howard to LeBron James himself to a veritable All-Star team of NBA players, all return to Ravin voluntarily because of his affable approach: knowing the sheer hectic-ness of players’ schedules, Ravin makes it a point to not get angry if a player is late to a session; his intentional drills expand and diversify their basketball skills in ways that nobody else does. Think of it like an after-school tutoring session, but for PhD candidates only.

What I find inspiring about Ravin’s story, now laid out for us in this year’s riveting The Hoops Whisperer, is that he has attained his career without the help of any connections or hook-ups. An uninspired lawyer by day, Ravin has always pursued excellence in basketball–whether as a youth player or improving the games of the world’s best–with a full-hearted and singular passion. It was unwavering passion and love for the game of basketball that kept Ravin hooked on it as he first coached a youth basketball team after work, and then finally worked out his first college players, and then finally worked out his first professional players, and all the way up to becoming a confidant of a player of Carmelo’s stature.

Ravin put in decades of work before earning his first paycheck in basketball, a tale of admirable and foolhardy tenacity that served to genuinely inspire me to stick to the craft of writing with an iota of the passion that Ravin has for basketball.

At these elite heights of the game, finding ways to improve a player’s already considerable skills is simply not a job for a muscle-bound, testosterone-flooded shouter. In order to actually teach these superstars new dimensions to the game of basketball, Ravin’s approach must be holistic, and usually teeters into the zen. He writes:

Training isn’t confined to a gym. It can mean late nights at home taking notes, eyes on the television during a player’s West Coast road trip; responding to the flurry of text messages after a shitty game; reminding them to do what’s in their best interest; reinforcing the principles we spent an off-season refining; listening when frustrations bubble; offering advice when their personal lives hit a rough patch; lifting spirits on bad days and humbling egos on good days; sitting in Tibetan silence on long flights and car rides because they wanted company, not conversation; attending their birthday celebrations, weddings, and guest appearances to show my unwavering support.

That sounds like a lot of work just to get to Ravin’s one-hour training sessions. It is a lot of work. But if you want to be a master craftsman at something, anything–for Ravin, it so happens to be teaching basketball–you must throw your whole life into the cause.