Home
»
Critical Essays
»
Prose Like A River: The Rhythm of Landscape in Angela Palm’s Riverine 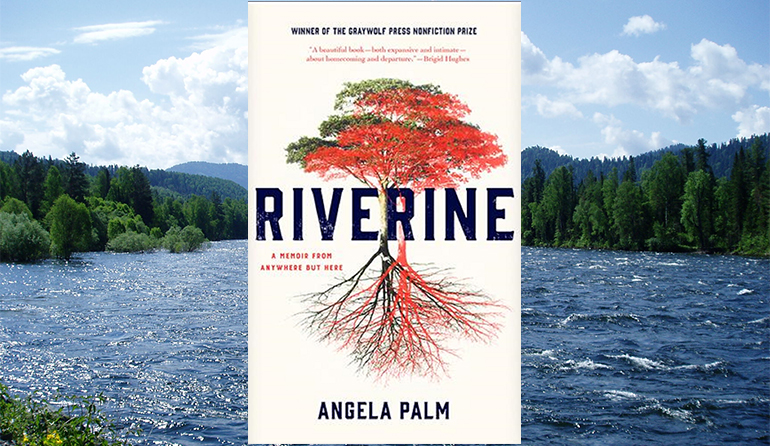 When I was growing up in the Blue Ridge Mountains, I loved to picnic with family on the bank of Cove Creek and listen, while we smacked our lips from cherry cobbler, to the creek gulp itself. Hollows between rocks sloshed pell-mell down the current’s throat. Whirlpools gargled a leaf, then swished it free. The cadence was breathless as a child glugging a cup with both hands, before running back to play with friends. Even blindfolded, I could distinguish its sound from another nearby body of water, New River.

Although many raft New River’s white water, the section nearest to my grandparents’ house was deep, broad, and slow moving. It covered underlying rocks with water higher than the canopies of the tallest trees. It did not burp or toss about but acted its age, far older than the name “New” implies, driving a wall of sound and water past billion-year-old mountains in its own sweet time.

Although Angela Palm grew up in rural Indiana in the former sediment bed of the Kankakee River, her memoir Riverine echoes that low bass and fearlessly held note I first heard in southwest Virginia. Its prose rhythm carries the ghost of an old body that knows what it is to meander, accrue, and carve a storyline that has and will go on.

Her title is the first suggestion of listening’s importance. The onomotopoeic “riverine” sets the tone, tuning readers’ into a region whose ecological needs and cultural warnings often go unheard. The Kankakee River was yanked straight in order to irrigate farmland in a dramatic gesture Palm links to the “violent extraction” of the Potawatomi Nation from their homeland in the Kankakee Marsh. She recognizes the cost and irony underlying the “heartland,” but her prose relaying this history is not rash. Rather, her sentences have the measured frustration of a river that periodically floods her neighborhood to reclaim its original course.

Hardly victorious, Palm relays the wounds inflicted by chemical fertilizers and plows, the droughts that afflict the fields, and the heat that sometimes incapacitates the high-school kids who work them but not the Latino workers hired at a fraction of their pay. In sentences laid down like rows of corn, “our girl, [who] makes it out of the riverbed” calls out the privilege that straightened the river at the expense of many. She does do so through depictions of the landscape as well as her neighbor, Corey.

The boy next door inspires a story of love and class at the heart of the book, when he is sentenced for murder. Part fascinating familiar and part other, Corey shapes Palm’s coming of age as well as her sense of social responsibility, since the narrative opens and extends outward from him to explore the larger relationship between people and place. Like the ghost of the river invoked by her prose rhythms, his character haunts her story with an illustration of loss.

It would take pages of quotations to reproduce Riverine’s prose rhythm. No single line sounds the muscular heft of silt and sediment as memory advances meaning, but I can isolate an eddy that might make it apparent by contrast. One such swirl occurs when Palm is on a break from work at the local restaurant called the River. A long-haired boy mentions having read the book she is reading, Jude the Obscure. They talk about it and other books, until she has to return to waitressing, but he asks her to meet him after her shift. When she does, he is sitting outside on the hood of a blue car waiting. He doesn’t tell her his name or make any romatic advances, but he looks her straight in the eye and sings a song, putting her name in the refrain. Then, he leaves, and she never sees him again. “He was proof of something, but I wasn’t sure what,” she says. The whole incidence takes a paragraph, shifting the current so quickly Palm’s steadily widening narrative is shown to be vulnerable as the riverbed to change.

“People are mostly water and thoughts,” she says later to Corey when she visits him in prison. Temporarily imagining that she understands the circumstances that led to his imprisonment, she says:

People, especially young ones, are malleable. Like wet sediment. Guided by whatever kind of banks have lined their river, by what has held them. By what has let the liquid drain out. They try to dredge the bottom, straighten the path, widen the mouth. But the water must go somewhere.

Her sentences are short in this passage, cut-off as if in sympathy with the prisoners locked-up all around them in too-tight cells during their timed conversation. The patience of earlier passages is gone, but if not in length they remain in conversation with each other, as her own story will always be in conversation with Corey’s, and both of their stories with that of a storm-glutted river overrunning the fields in search of a way out.

Tags:Angela Palm, memoir, Riverine: A Memoir from Anywhere But Here