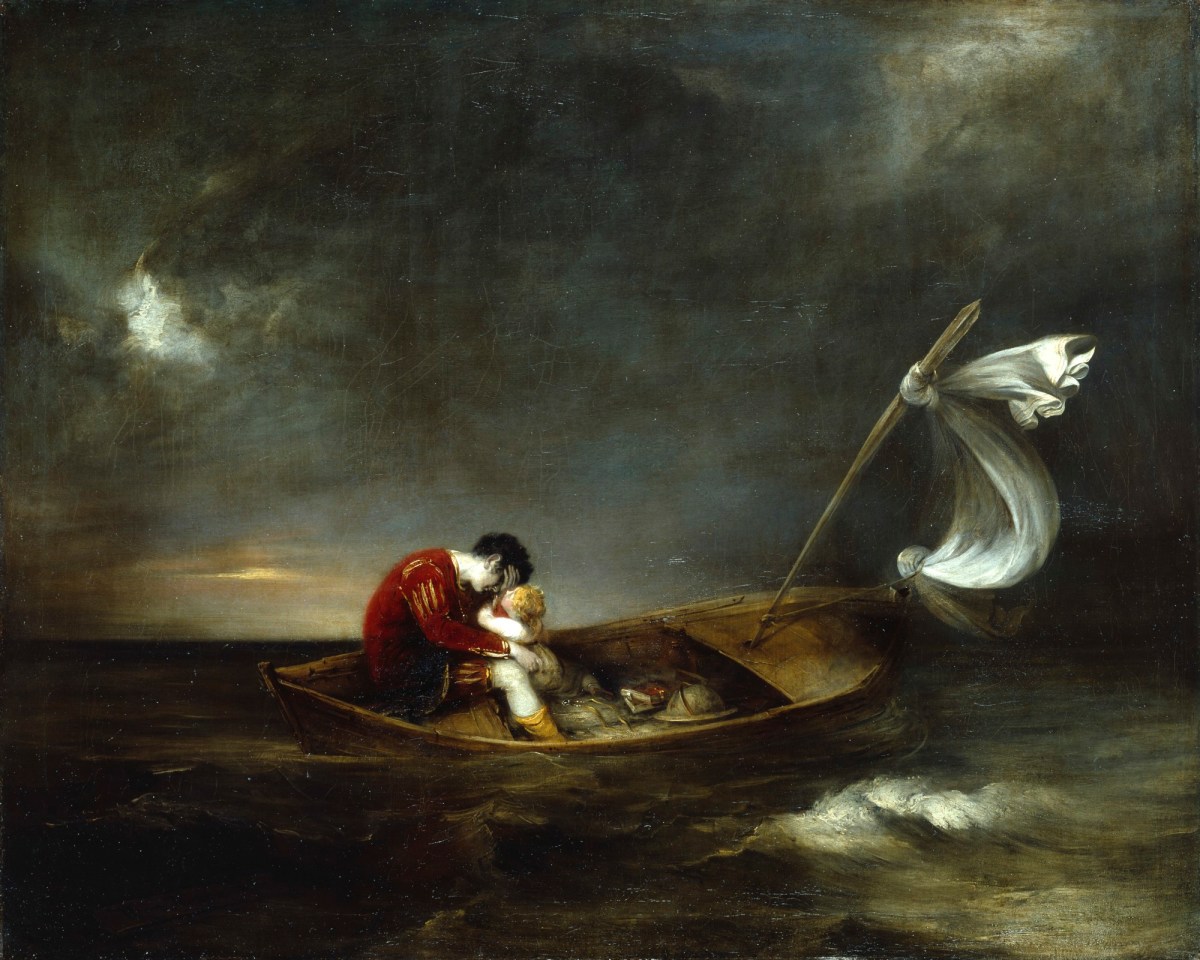 My daughter chose the narwhal for her first-grade marine animal research project—a real animal, of course, but a little fantastic, enigmatic, temperamentally incompatible with captivity. There’s something romantic about the narwhal. “All males and even some females have tusks!” my daughter told her classmates, “and the tusk isn’t a horn; it’s a tooth!”

Their Zoom meeting has become a veritable undersea garden of weird facts. Another student, who chose the octopus, told the class, “It can take many weeks to re-grow an arm!” Still another, who chose the goblin fish, looked straight into the camera, warning everyone that, “If it accidentally finds its way into another zone of the ocean, it can drown!” “I didn’t know that,” the teacher said. There was a whiff of real concern in her voice—both for the fish and the quarantined kid.

We are, none of us, doing particularly well. My daughter asked me recently if this is “real life.” At first, I was pleased at the existential question. Ah, I thought, she’s definitely my daughter! And because she’s my daughter, I wanted to answer her, “I don’t know,” because not knowing is my M.O., my routine state of being, and why not be honest? But openly copping to doubt seemed, in the moment, dangerous business. She’s already been having regular nightmares and panics any time I leave the room. While neither of these things on their own is particularly troubling, it’s their persistence that’s left me worried, left me wondering, too, if this is, actually, real life—at least in the sense that it will continue, indefinitely. So, I smile and say, “Things will be normal again someday soon.” But my daughter isn’t particularly good at measuring time.

It’s been nine months now, and these days she sits at our dining room table in PJs, rat’s nest at the back of her head, surrounded by lined paper, broken crayons, and chewed-on pencils, our house now an elementary school. I’m the teacher, but, between my student/daughter’s blow-ups and breakdowns, I flip through my huge Arden Shakespeare, hoping to be a writer too, looking for Shakespeare in everything and finding everything in him. Indeed, the pandemic has made us all “rich and strange.”

Full fathom five thy father lies,
Of his bones are coral made;
Those are pearls that were his eyes;
Nothing of him that doth fade,
But doth suffer a sea-change
Into something rich and strange

The quote comes from The Tempest, one of Shakespeare’s last plays, classified as a romance for its many fantastic elements, perhaps including its odd sense of time. The play’s action is confined to a mere six hours, and it’s in these six hours that Prospero (the exiled Duke of Milan) must take revenge on his brother Antonio the usurper (then forgive him), marry his daughter to Alonso the King of Naples’s son, then set his spirit-servant Ariel free. At the end of the action, he will then “break [his] staff, / Bury it certain fathoms in the earth, / And deeper than did ever plummet sound / [he’ll] drown [his] book.” It is also inside these six hours that a ship is wrecked, yet preserved whole; murder plots are thwarted; and a young woman, long isolated, finds joy in a “brave new world / That has such people in’t!” It’s inside these six hours that we witness the depravity of slavery, political reversals, and both the privileges and pitfalls of a life spent myopically sequestered in books. It is, in other words, Prospero’s play, and we’re all—audience included—bound by it.

That is, until Prospero, in his “coda,” turns to us and pleads,

Since I have my dukedom got
And pardoned the deceiver, dwell
In this bare island by your spell,
But release me from my bands
With the help of your good hands.

We’re now given agency to change the course of events—an agency, it seems, we had all along. At the play’s end, Prospero’s “charms are all o’erthrown,” and it’s apparently in our power to “relieve” him of his imprisonment.

The play’s sense of time, seemingly irrational and strange to the shipwrecked characters, is significant to Prospero’s impending sense of something ending or, rather, something else beginning. Perhaps he’s been operating under our time constraints throughout and manages to make “magic” within their parameters, manipulating what time he’s allotted so that it seems to the play’s other characters that time at once crawls and speeds by. In fact, Prospero’s motivations are predicated on actions that occurred long before The Tempest begins—twelve years to be exact, a point Antonio underscores later in the play by telling Sebastian, “What’s past is prologue.” In other words, the play itself and the characters in it fulfill functions scripted for them from the start.

In his prologue (performed as a monologue), Prospero explains to his daughter that his brother Antonio ousted him from his dukedom in Milan for having forgone active governance in lieu of academic study and the hermetic pursuit of “bettering of [his] mind.” Prospero was, it turns out, far too in love with his books to be a good leader. As a result, he and his toddler daughter, Miranda, were sent off to a desert island populated by witches and spirits but bereft of Milan’s network of nursemaids, tutors, and most decisively, women role-models. Prospero was thus faced with the very real prospect of having to single-handedly raise and educate Miranda in an unfamiliar place absent the social structures, customs, and values a man of his rank would typically rely on for his daughter’s upbringing. As a result, Prospero makes use of what resources are available to him—namely an orphaned native (Caliban), an imprisoned spirit of the air (Ariel), and the library of books he’s managed to take with him.

The island’s strangeness and isolation are what prompts Prospero’s unorthodox teaching and parenting methods, urging him to make conscious decisions about which social norms are worth preserving, and which can, in effect, be thrown out. As scholar Hiewon Shin argues in her 2008 essay “Single Parenting, Homeschooling: Prospero, Caliban, Miranda,” “the contemporary dichotomy between women’s and men’s education dissolves, through Prospero’s androgynous role as a schoolmaster and single parent. I use the term androgynous in order to highlight Prospero’s combining of fatherly and motherly roles for Miranda’s balanced upbringing.” Prospero, as a parent/teacher, must partake in and take into consideration what his Milanese culture designated as “women’s work,” and teach his daughter not only the skills but the values it associates with womanhood, along with the kinds of secular knowledge Prospero excels in, and which would be typically reserved to men. He is also, quite suddenly, made to be what we might consider a pre-school teacher, simplifying his impressive learning in the “liberal arts” down to the basic building blocks of language. Shin goes on to say:

“For a duke to take on the role of a lowly schoolmaster—a very low-paid, low-status job, especially since this is very elementary level teaching—would have been extremely unusual, although the desert-island scenario makes unusual practices necessary to some extent, and the aura of fantasy and fairies should make us cautious about too literal minded a resort to social history.”

The island’s utopian “fantasy” (as Shin describes it) forces Prospero into a position he’d find ridiculous in Renaissance Milan, but like the weird undersea world the spirit Ariel describes, it makes Prospero’s relationship with his daughter richer and stranger. Miranda herself is, as Shin says, “hardly . . . a daughter of passive Christian virtue. In The Tempest, the contemporary dichotomy between women’s and men’s education dissolves, through Prospero’s androgynous role as a schoolmaster and single parent.” While Prospero teaches Miranda how to, in turn, become a teacher to Caliban, he forces Caliban into domestic duties most commonly associated with women. She is obedient to her father, however, and deeply empathetic—female-coded characteristics Prospero praises and encourages, but Miranda’s memory, her sense of time, is also deeply mysterious to him and as powerful as any magic. He has taught her, in effect, how to learn, and how to remember.

In Act 1, Scene 2, Prospero urges Miranda: “The hour’s now come; / The very minute bids thee ope thine ear. / Obey, and be attentive. Canst thou remember / A time before we came unto this cell?” Then Prospero cuts himself off, convinced that there’s no way Miranda—at the time just three years old—could remember her life as it was in Milan. “Certainly, sir, I can,” Miranda replies. Prospero is perplexed, even amazed. He asks her, “But how is it / That this lives in thy mind? What seest thou else / In that dark-backward and abysm of time?” Despite its having been buried “full fathom five,” Prospero’s daughter “undrowns” the memory, proving her great capacity for remembering, and for compassion.

“O, I have suffered / With those I saw suffer,” she says of their shipwrecked crew. Prospero sees her show of empathy as an opportunity to reveal his past (and hers). At this point in the action, Prospero’s inner clock is still enigmatic to Miranda, as well as to us; we, as the audience, have yet to be addressed and our agency invoked. We have yet to discover that we, in fact, have power over the story, as Miranda, bemoaning the wreck, says, “Had I been any god of power, I would / Have sunk the sea within the earth,” yet to understand that she is. Even to an erudite mage like Prospero, Miranda’s mind is mysterious and powerful, her memory evocative of her individual, autonomous character. He’s done his best to teach her, despite the circumstances, but no teacher can say with certainty what a student will remember and what will be forgotten.

I wonder what will remain of this time, which will, inevitably, become past time (though when, I don’t know). What will my own daughter conjure “in that dark-backward and abysm of time,” and will remembering cause her pain? Teach her compassion? Will the memory of it influence—perhaps without her even knowing—how she learns, how she interacts with others? I wonder if she’ll remember what an awful home-school teacher I was, bungling her real teacher’s assignments, impatient, distracted, depressed. I wonder if she’ll remember her backward “s,” or the shavings on the floor from her nervous pencil sharpening. I wasn’t meant to be an elementary teacher, but despite the circumstances—so unusual, like Prospero’s island—I hope my daughter remembers that I tried my best.

And as on Prospero’s island, time is strange here, too. Nine months ago, my daughter went to real school. Nine months ago, she saw her teacher in real life—her teacher, who is definitive and structured, who is trained in elementary school teaching, who took care of the letters and numbers while I “wallowed in complexity” with my college students in real life among my books. It seems like forever ago, and also like yesterday, and my daughter and I both mourn, in fresh, surprising ways, these losses. She asks me, “Has anything like this happened before?” And I say, “Yes (‘what’s past is prologue’).” “So, someday we’ll be history, like in the books?” “Yes,” I say. Of that, at least, I have little doubt.

This piece was originally published on December 14, 2020.