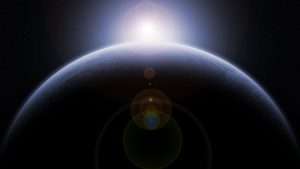 What is the meaning of consent within an oppressive culture? This question lies at the heart of Lilith’s Brood, Octavia E. Butler’s sci-fi trilogy which presents an extended allegory for colonialism that is inextricably tied to rape and other types of nonconsensual sex. By associating the violation of oppressed bodies with the erasure of a culture, Spencer demonstrates that one of the greatest evils of colonialism is the collective loss of agency that can reverberate for generations to come.

At the start of the first book, Dawn (which will soon be adapted into an HBO series), humanity is decimated, and Earth has been all but destroyed by nuclear war. A black American woman, Lilith Iyapo, awakes among frightening aliens called “Oankali,” who offer humanity a devil’s bargain: they will “save” humanity from extinction by taking human DNA, blending it with their own, and creating a stronger hybrid species. Lilith immediately becomes afraid that they will rape her, or remove her eggs without her permission, but they assure her, “No Oankali will touch you without your consent.”

However, “consent” becomes an increasingly muddied concept as the novel goes on. Under the guise of kindness, the Oankali have taken complete control over the humans: they keep the remaining humans captive on their ship, put them to sleep if they become too difficult to control, keep them in isolation until they are within an inch of their sanity. Even if the humans were able to escape back to Earth, the Oankali have destroyed all remnants of human civilization for the sake of a “fresh start” (a clear parallel to real-life heritage destruction which has been perpetrated by colonialist conquerors throughout history and is considered a form of cultural genocide). In that context, any “choice” the humans have to resist the will of the Oankali is mostly illusory.

The most pivotal figure in Butler’s colonialism allegory is arguably Paul Titus, the first man Lilith sees after she awakens on the ship. Paul has been awake for longer than Lilith, and has been living in an Oankali family since he was fourteen years old. The Oankali tell Paul, a severely emotionally arrested man who still acts like a child, that he will be able to have sex with Lilith (because they simply assume that she will be amenable). They are then horrified when Paul violently tries to rape Lilith, and then beats her within an inch of her life, all while she pleads with him not to “make [him]self their dog.” After the Oankali heal her, she never blames Paul, but rather places the blame squarely on the aliens’ shoulders. What could they expect, she asks, when they deprived him of contact with other members of his kind, violated his mind and body, and treated him like an animal until he acted like one? As she puts it, Paul has never had anyone to “teach him to be a man.”

Throughout the novel, Butler complicates the traditional dystopian victimization narrative by portraying the Oankali as—in a certain sense—more peaceful and “civilized” than the humans they are subjugating. By all accounts, Oankali never resort to violent rape, they don’t kill (or even harm) any living being unless absolutely necessary, and they live in a fully environmentally sustainable manner. Meanwhile, the humans are often portrayed as comparatively primitive and cruel, especially after they are returned to Earth. They routinely rape, pillage, murder, and commit all manner of violent transgressions; even the relatively kindhearted humans condone kidnapping and selling hybrid (or “construct”) Oankali children on the black market. When two construct children are sold into a relatively prosperous human community, a contingent of humans attempts to cut off their sensory tentacles—an extremely painful, permanently debilitating, and potentially fatal act comparable to female genital mutilation.

That being said, the trilogy never fulfills the simplistic “humans fail to justify their own existence” trope. While the Oankali never technically rape, another common tool of colonialism, but they depersonalize and objectify human bodies in more abstract, creative ways. Before they awaken humans on the ship, the aliens make imprints of their genetic code (which allows them to clone any human they would like) and, in some cases, take their actual genetic material and create countless offspring through surrogacy. Paul Titus, for example, morosely informs Lilith that he has never had sex but has fathered over 70 children with unknown human women, possibly his own relatives (incest is not a taboo within the Oankali community). He says to her, in tellingly impersonal language, that he “[doesn’t] know who they mixed the stuff with.”

Similarly, the sex between aliens and humans may not be “rape” in the traditional sense, but is disturbingly coercive. The first time the reader witnesses Oankali-human sex, Lilith’s Oankali mate, Nikanj, inserts his sensory tentacles into Lilith’s human mate, Joseph, while he is unconscious. When Joseph wakes, he never codes the experience as “rape,” because the Oankali induce humans to imagine extremely pleasurable sex with their human mates. As a result, many humans are “seduced” by the Oankali and regularly have “consensual” sex with them, but usually after they are indoctrinated into this new type of sex without their explicit permission. And as the physiology of the Oankali is elucidated in subsequent books, it becomes clear that they emit overpoweringly attractive pheromones that make it physically unbearable for humans to leave their mates for more than a few days, muddying the possibility of consent even further.

While the Oankali conclude that humans are more violent as a result of their “inherent genetic contradictions,” Butler draws a direct line from Oankali human rights abuses to the violence that takes place in human cultures. The Oankali render the humans infertile without their consent, which leads to a normalization of baby-stealing. The Oankali insist that humans must annihilate their own species by blending with a more powerful species, so the humans become extremely tribal and discriminatory against the “other.” And all of the humans exhibit gendered symptoms of sexual trauma on a macro level: the men become even more violent and toxically masculine because they feel emasculated, while the women become complicit with either their Oankali or human abusers in a show of learned helplessness.

Conservative thinker Dinesh D’Sousa, known for writing headlines like “Two Cheers for Colonialism,” wrote in the Washington Times that just as slavery paradoxically made the descendants of slaves more prosperous compared to Africans, “colonialism proved to be the mechanism by which Western ideas like democracy, self-determination, and unalienable human rights came to the peoples of Asia, Africa, and South America.” Even if there were some specious truth to these statements, there is no justifying the evils that take place within the institutions of slavery and colonialism, especially not when you’re assigning value to individual rights in the same breath. Similarly, even if the Oankali did manage to “save” our species by violently blending with it, it would be a Pyrrhic victory. They would preserve humanity by getting rid of everything that made us human—“save” humanity by destroying it.

Butler isn’t interested in easy answers, and so, she maintains some ambiguity about the morality of the Oankali’s actions. Two of the books are written from constructs’ perspectives, so we empathize with their apparently altruistic point of view: they want to save humans from themselves. However, by the end of the trilogy, Butler underscores the frightening arrogance and (literal) dehumanization that underlies all of the Oankali’s kindnesses; when a construct discovers a small community of severely inbred, disease-riddled, fertile humans (founded after the gang rape of a young girl led to a “miracle” pregnancy), it convinces two of them to reveal its location so it can heal them and relocate them to a Mars human colony. On some level, it is better for these people to be removed from their homes, because they will be able to live long, healthy lives and bear healthy children. But even so, the construct’s subjugation of the village is highly disturbing, and includes a passage that is more evocative of out-and-out rape than anything else in the trilogy:

Holding his hands, I lay down alongside him […] and wedged him against the stone wall […] I stopped his hoarse shouting by looping one sensory arm around his neck, then moving the coil up to cover his mouth. He bit me, but his blunt human teeth couldn’t do any serious harm […]

I examined him thoroughly, enjoying the newness of him. By the time I had finished, he had stopped struggling and lay quietly in my arms. I took my sensory arm from his mouth, and he did not shout.

Through her unflinching portrayal of the violence committed by both the humans and the Oankali, Butler demonstrates that colonialism creates subjugated peoples who are defined by collective trauma. Just as slaves cannot be described as “mistresses,” there can be no agency within the framework of slavery and/or colonialism, because the ultimate violation has already taken place. In Lilith’s Brood, Butler conceptualizes colonialism as a very specific type of violence: the rape of an entire culture.