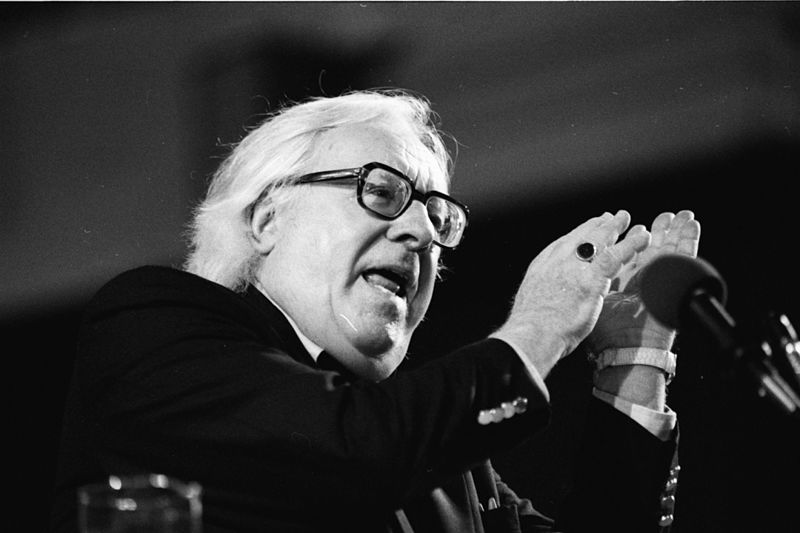 In celebration of the centennial of Ray Bradbury’s birthday this weekend, on August 22, we’re publishing this essay, by Alice Hoffman—as well as reprinting Bradbury’s story “A Sound of Thunder,” introduced by Hoffman, in our forthcoming Fall issue.

Once or twice, if we’re lucky, we may come across a writer who changes our lives. For me, the greatest discovery of my reading life, and the biggest influence on my writing life, was a box of fantasy and science fiction books my father left behind when he moved out. On a summer’s day, in a dark, cool basement, with little hope in the present or for the future, I discovered Ray Bradbury. I immediately set to reading. In the box was The Illustrated Man, one of the first books of linked short stories, in which a man’s tattoos tell the narratives. Reading this brilliant book was a fascinating, eye-opening experience, and allowed me to understand, early on, that fiction could offer something brand new, and that it was possible to explore a fictional world in fresh and unique ways.

In that same box of books was Bradbury’s work of genius, the dystopian novel Fahrenheit 451, which forever changed the way I looked at and valued literature. Here was a world in which books were so dangerous they were burned by “firemen,” and so valuable that people were willing to become a book, memorizing an entire text, so that even if it was destroyed, its story would live on. Also left for me to discover was Dandelion Wine, a semi-autobiographical Bradbury fantasy, which reads like a fevered dream and includes the story “The Tarot Witch,” a tale of a mechanical witch and the two friends who try to rescue her, who receive a prediction on a printed card that they will Live Forever—a phrase that a carnival magician dubbed Electrico shared with Bradbury when he was a boy.

The novel I came to love best was Something Wicked This Way Comes, a magical journey that follows the paths of thirteen-year-old best friends Jim Nightshade and Will Halloway, whose lives are changed when a traveling carnival arrives in their small Midwestern town. Here is a brilliant blend of the real and the extraordinary: in an ordinary town, two ordinary boys stumble into a world of magic. This novel, about the conflict of good and evil inside us all, can be a huge moral turning point for a young reader, mirrored by the experiences of the characters who are approaching their fourteenth birthdays and, thus, adulthood. The story centers on the pain of leaving childhood behind and the fear and excitement of entering the world of adults, where evil is commonplace and everyone’s courage is tested. Begun as a screenplay for his friend and Hollywood icon Gene Kelly to direct, Something Wicked This Way Comes grew into a magnificent novel that is both a page-turner and a heartbreaker. Both Dandelion Wine and Something Wicked This Way Comes are set in Green Town, the fictionalized version of Waukegan, Illinois where Bradbury grew up. There is a nostalgia to these stories of young people, as if an older person were looking back through time with knowledge his younger self couldn’t possibly possess, knowledge of difficult moral choices.

The mysterious carnival in Something Wicked This Way Comes gives rise to the book’s title—beautiful and ominous words from Shakespeare’s darkest play, Macbeth. By the pricking of my thumbs, something wicked this way comes. Cooger & Dark’s Pandemonium Shadow Show is run by the mysterious Mr. Dark, a tattooed man in search of souls that might be willing to come over to the dark side. Here, time is a merry-go-round that can either go backwards, taking a rider back to childhood, or, if ridden in the opposite direction, can quickly age the rider. Mr. Electrico (based on the magician of Bradbury’s childhood) and the Dust Witch are on the side of darkness, and Will’s father, Charles Holloway, who works at the library, is a force of light that opposes them. The library, like the carnival, is a place of magic, but one can be trusted, and the other cannot. In effect, all leads back to the library and to the power of books. Charles Holloway ultimately triumphs over Mr. Dark, with knowledge winning out over perversity and narcissism, and good over evil, but the battle is real, and it is a struggle, one we all face at some point in our lives.

What you read at that most impressionable time of your life becomes part of your DNA. Certainly, this was true for me, and much of my own fiction was influenced by reading Bradbury. My first novel, Property Of, is set in a mythic New York City, where a young nameless girl on the threshold of adulthood struggles for the soul of the boy she loves against a complicated villain, a tattooed man known as The Dolphin—a dark presence much like the ones in The Illustrated Man and Something Wicked This Way Comes. It’s ultimately a battle she can’t win, and although she discovers love is something very different than what she had previously imagined it was, she comes to understand the one person she can save is herself.

Mythic characters in the real world have continued to appear in my fiction since my first publication: The Giant on Martha’s Vineyard who comes to help an ordinary little boy in Illumination Night; the Drowning Man in The Drowning Season, in which retired carnival players live in both the past and the present; the magic in Seventh Heaven, set in an ordinary Long Island town modeled on the neighborhood where I grew up, where red shoes can walk down the street and love itself is a spell. In Turtle Moon, an angel in a Gumbo Limbo tree looks after those on earth he misses most, and a policeman, haunted by the death of his cousin, cannot let go of the past. In The Foretelling, an Amazon girl in the Bronze Age is doomed until she changes her fate with magic and love. In The Red Garden, a book of linked stories, a woman can fall in love with a bear and a man can turn his wife into an eel. Local Girls centers on two friends who are about to become adults and who take very different paths as they navigate a world as full of pitfalls as any fairy tale, and in White Horses a girl has an unusual sleeping illness and must rescue herself. Blackbird House, also a book of linked stories, presents a witch who loses her husband, a woman who fights a war, and a ghost who haunts a farm. In The Museum of Extraordinary Things, a mermaid in Coney Island in the year 1911 has a father with a dark carnival past that nearly ruins her life, and in The World That We Knew, a golem is sent to deliver a girl out of the hands of evil. In all of these books, the real and the magical can exist side-by-side, and good and evil fight over lives and souls. All of them were influenced by my early readings of fairy tales, myths, folk tales, fantasy, and science fiction, but most of all by my reading of Ray Bradbury, whose writing allowed me to combine the real and the mythic in worlds of my own imaginings.

I felt Bradbury’s influence most after 9/11. In the aftermath of that tragic disaster I experienced writer’s block for the first time. I’d become convinced that in such a terrible and dark time, books no longer mattered. Luckily, I thought to return to Fahrenheit 451. In re-reading the novel I was reminded how necessary writing is. I once again recognized that books were essential treasures. I was then able to write Green Angel, the story of a girl who faces great loss and manages to write her way back to life. I am honored to say this is the book that many of my readers have told me has helped them most after they experience their own trauma, proving yet again that Ray Bradbury was right. Books will always matter. They will always have the ability to change lives, as my life was changed on the summer day when I found a box of books my father left behind, a treasure for which I will always be grateful.

In the last year of Bradbury’s life, his good friends Mort Castle and Sam Weller created a tribute collection called Shadow Show, asking writers who loved and admired Ray to write a story for him. My story, “Conjure,” echoed one of Bradbury’s, “The Lonely One.” “Conjure” is the tale of two teenaged girls in the summer before adulthood in an ordinary town where nothing ever happens. While working at the local pool, they meet a handsome drifter who has less-than-innocent plans, and one of the girls sacrifices a life-long friendship to save her friend from a dark future. I still have the video Ray sent to me after he read it, letting me know that he was “deeply in love” with the story. For me, the girl who read about imagined worlds in the basement on a hot summer day, his message meant more than any prize. I’ve always thought of Ray as my literary godfather, and I know that many writers feel the same. Bradbury created fiction that a reader could step into; you could leave your own small, unhappy life behind and walk into novels and stories built out of light and dark, magic and small-town life. Bradbury’s brilliance is in his prescient view of the future and his huge ideas of what might come to be, but what is equally important is his rare talent for presenting true humanity. That is the magic. To conjure a world out of paper and type. To open a door that we can walk through even now that he is gone. Live forever, the magician Electrico told him when he was just a boy. Ray Bradbury has done exactly that.