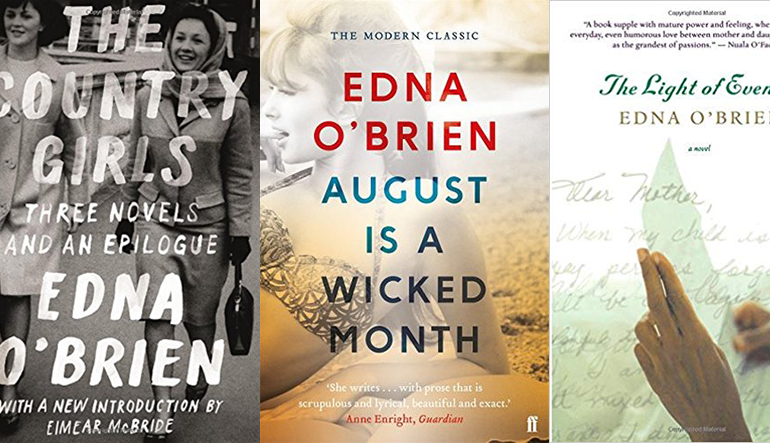 In 1976, I sat in a Dublin bookshop, taken hostage by Caithleen, her Dada who drank and hadn’t come home, the green-teethed farmhand she had a crush on who cooked her a “gorgeous little pullet egg,” and her poor Mama off on a fateful row in the lake. In the Country Girls trilogy, Edna O’Brien’s boisterous prose grabs and never lets go. I discovered these books, the last of which was released in 1964 (though all three were banned in Ireland until 1967), while traveling across O’Brien’s native soil. Three slender Penguin books remained tucked in my backpack, read and reread, through many months of uncertainty traveling Europe between college and career until, ultimately, the defiant escapades of Caithleen and her best friend Baba bolstered my decision to settle in New York City despite having no place to stay and no job. At twenty-two, imagining myself one of O’Brien’s characters, I stepped off the plane ready for adventure.

The trilogy opens on Caithleen’s last day of childhood. Rushing home to tell her Mama she’s won a scholarship to convent school, she is swarmed by clucking villagers refusing to say who was in the boat with Mr. O’Brien when it sunk. No one wants to tell her the truth, how her Mama drowned in the arms of a man who was not her Dada. “I could not believe my mother was gone; and still I knew it was true, because I had a feeling of doom and every bit of me was frozen stiff.” Enter Mr. Gentleman, a married older man who courts the motherless Caithleen; by book’s end, he abandons her. Her convent education, too, fizzles out after Baba devises a plan for their expulsion: writing in block letters across a picture of the blessed virgin that Father Tom “stuck his long thing” into Sister Mary. Thus whirls the emotional kaleidoscope of the first volume of the Country Girls trilogy, The Country Girls—O’Brien’s first book and one that was written in a mere three weeks. I read it in a frenzy, not always knowing whether to laugh or cry.

In the trilogy’s second book, The Lonely Girl, Caithleen and Baba are living in a rented room in Dublin, in search of men and eking out a living—not very different from my 1970s life in New York City. Except, for Caithleen and Baba, it is the 1950s, and their world is tethered to the Catholic Church. When Caithleen gets involved with Eugene, a man who is neither Catholic nor fully divorced from his wife in America, someone sends her Dada an anonymous letter informing him that his daughter is keeping company with a sinful man; furious, he drags her back home. After she escapes from family clutches and returns to Eugene, her Dada descends with a posse. Trembling as she hides under the sofa’s rusty springs in her lover’s home, Caithleen silently moans, “I would die while they sat there deciding my life. I would die—with Andy’s dungy boots under my nose.” She survives only to miserably marry Eugene, as the trilogy dims into a tragic dénouement. I closed the third book, Girls in Their Married Bliss, confused by why the once-defiant Caithleen succumbed to misfortunes, gashing her wrists in London’s Waterloo Station. I nearly couldn’t accept the ending.

My life, however, was just beginning. I arrived in New York City as tall ships sailed at bicentennial celebrations of the country’s independence—and, as I saw it, of mine too. Released, at last, from a suffocating childhood in a bitterly divorced home. Caithleen and Baba gave me a fictional taste of breaking free. Not all good, The Country Girls showed me, but an awakening to vast possibilities.

O’Brien’s books, shelved between the thick Victorian novels of my college years and Shakespeare in a Chelsea five-floor walkup, would soon overwhelm those tomes. She is a prolific writer and I, always looking for her next book, strongly connected with her jaunty rebellious characters and, by extension, the author.

Only in broad terms are O’Brien and I alike. Both of us are independent woman who write; in our youth, we lived sensually, some might say wickedly; we raised children largely on our own; we had complicated relationships, especially with our mothers. In our later years, we look in mirrors and don’t always recognize the face. The difference between us is far larger. We grew up in different eras (she is over two decades older) and on different continents—she in rural Ireland, where she was raised Catholic; me, suburban Baltimore, where I grew up Jewish. She knows fame and notoriety. I do not. That her writing touches me so deeply and personally is her chutzpah, rattling Ireland’s rigidity with prose ripping open corseted lives to reveal a bold and sensual spirit.

With Edna O’Brien boldness, I talked my way into a job at Rolling Stone. Within two years, a rebellious fervor gripped me and I began working surreptitiously at the magazine to raise money for the antinuclear movement. Just before a No Nukes benefit concert in 1979, I told someone that I wanted James Taylor to kiss me. At the after-party, when thanking me for being a concert organizer, the singer reached down and did. Chaste, but oh-so sweet.

As O’Brien’s tales go, the kiss never lingers nor do marriages last. August is a Wicked Month, her fourth book, unfolds into tragedy after starting with a liberating journey—Ellen, who shares child custody with her estranged husband, escapes the oppressive London heat for the French Riviera when her young son goes on a camping trip with his father. I found a used copy of this 1965 book at the Strand bookstore on a hot summer day and read it in an airconditioned bar. I was glad for inebriation when Ellen learns the boy has died in an unfortunate accident, one in which she becomes convinced she could have prevented if she’d never left her domineering husband. Most of O’Brien’s fictional husbands are brutish, as was her own. I would never marry. Growing up in the wake of a marital disaster soured me. And the sexual revolution of the sixties and seventies provided an alternative. O’Brien, of course, fully embraced the revolution.

Her famous story “The Love Object” first appeared in a 1967 issue of The New Yorker; a decade later, I read the anthologized version many times. Unlike her early books, there’s a sophistication to her television-announcer protagonist Martha; the writing—devoid of youthful banter—is terse and slightly detached. Martha begins an affair with a married man too famous to name. She tastes a fig for the first time: “How do you describe a taste? They were a new food and he was a new man and that night in my bed he was both stranger and lover, which I used to think was the ideal bed partner.” He leaves her abruptly one morning, saying he cannot love her in the way she loves him. The only remnant of him is “thick turds of dark-grey cigar ash,” which she carefully stores in an empty lozenge tin.

O’Brien’s story offered odd but soulful solace when my dalliances with unobtainable men also fizzled into ash. At Rolling Stone, newsroom rules permitted fleeting sex if, afterward, such coupling was unhooked like a catch-and-release fish. O’Brien’s books opened me to the passion in these trysts. Sexuality is often a driving force in her characters’ motivations and ultimate fate, and a lengthy affair with an investigative reporter at the magazine inspired my move to Washington in 1984 to pursue serious journalism.

When O’Brien released her twelfth novel, Time and Tide, which explores the primal undertow of motherhood, in 1992, a year after I’d given birth as a single mother, I read it as a cautionary tale. Nell may be her most calamitous creation. A more fully realized character than Ellen in August is a Wicked Month, Nell likewise leaves her horrid husband and wins custody of her children, then dabbles dangerously with edgy men and bad drugs. Fading into, and out of, a certain madness, she accidently sets her house on fire. Her elder son Paddy gets snagged in her emotional residue and succumbs to reckless acts, ones that yank him down. “‘You mustn’t go under, Pads, like I did … yes, I did,’” Nell says to him. Sadly, Paddy drowns in a boat accident.

This chilling story made me consider whether my son would go astray. I lacked the support to devote myself fully to both motherhood and a reporting job on Capitol Hill that required me to cover all-night Senate filibusters and late votes. After a few years, my editor informed me I no longer cut it as a Hill reporter. “To have proved yourself,” he said, eyes not meeting mine, “you would never have seen your baby.” In O’Brien’s schema, the tough balancing act was not my downfall. Losing my job was retribution for the sin of being an unmarried mother—that is, had I been one of her characters.

Not long after my son left for college in 2010, I moved six-hundred miles away from Washington to coastal Maine. My mother, who lived in Baltimore, asked me to wait until she died before leaving, but I needed distance to prepare myself for losing this woman who’d been too emotionally fragile to be a good mother when I was young but wrestled up the strength to be controlling as I got older. I found The Light of Evening, O’Brien’s 2006 novel, at the local library and read it by the woodstove in winter. The writing has the occasional softness of water color, where once O’Brian preferred bold strokes. Dilly, defiant as her daughter will become, escapes for a time to Brooklyn before returning to Ireland and marriage. Later, long estranged from her mother, Eleanora visits the dying Dilly, who “embraces her daughter, holds her in a tight, clumsy, angry, desperate, loving, farewelling embrace.” The last thing Leanora sees is her mother’s reaching arm, “the bone of her elbow the loneliest blue and the pity she should have shown earlier has started up in her then.” I slowly understood I would have to forgive my mother. My visits to Baltimore grew more frequent, giving us time to talk, as my mother’s smoking-impaired breathing grew heavy, pained, and finally stopped.

I turned to O’Brien’s 2012 memoir Country Girl—recently cited by The New York Times as one of the top fifty memoirs written in the past fifty years—when my mother’s death in 2016 unshackled me to write about my past. O’Brien with the fictional layer stripped away is more emotionally raw than O’Brien in her novels. At convent school, we learn, Edna was not there to rebel and ultimately be sent off in disgrace, but to fall in childish love with a nun and, due to Edna’s “seeming devoutness and obedience,” given the honor of playing Our Lady of Fatima in the school play. Nonetheless, she reminds us, “the world with all its sins and guile and blandishments was beckoning.” I, too, have channeled my stultifying childhood into one great moment of escape. Going back now with older eyes, as O’Brien has done, requires sifting through sand for tumbled and ground shards of glass, each a tiny revelation.