Home
»
Authors
»
Reading Frantumaglia After the Unmasking of Elena Ferrante 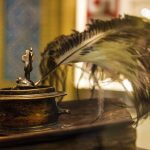 If you frequent the bookish corners of Twitter it’s been impossible to ignore the furor surrounding the revelation of Elena Ferrante’s identity last month, which Alyssa Loebig briefly mentioned earlier this month in a Round-Up post. Some consider it an inevitability, the price you pay for becoming a success. Yet the majority of her fans seem to feel that it is enough to have been given the gift of her writing, without expressly violating her wishes. There is good reason to think that she may never publish again; she’s warned us as much over the years in her interviews conducted by correspondence. As recently as December 2014, she stated in an interview for La Repubblica:

“What I fear most is the loss of the completely anomalous creative space I seem to have discovered. It’s not a small thing to write knowing that you can orchestrate for readers not only a story, characters, feelings, landscapes but the very figure of the author, the most genuine figure, because it’s created from writing alone, from the pure technical exploration of a possibility. That’s why either I remain Ferrante or I no longer publish.”

She quickly loses patience with guessing games, and she’s previously answered the question “Who is Elena Ferrante?” with: “Elena Ferrante? Thirteen letters, no more or less. Her definition is all there.” This definition wasn’t sufficient for journalist Claudio Gatti, who pored over the finances of the publishing house, Edizioni e/o, and deduced that Anita Raja is likely the woman behind Elena Ferrante. Gatti seemed to time his disclosure to precede the publication of Ferrante’s latest work, Frantumaglia: A Writer’s Journey, an English language translation of her assorted letters and interviews. Gatti writes: “Far from the daughter of a Neapolitan seamstress described in Frantumaglia, new revelations from real estate and financial records point to Anita Raja, a Rome-based translator whose German-born mother fled the Holocaust and later married a Neapolitan magistrate.” Gatti is self-satisfied, as if pleased to have caught her in a lie. He says: “In an age in which fame and celebrity are desperately sought after, the person behind Ferrante apparently didn’t want to be known. But her books’ sensational success made the search for her identity virtually inevitable. It also left financial clues that speak by themselves.”

Clearly the clues didn’t speak for themselves as the reporter was engaged in a months-long investigation to discover them, and he was probably disappointed to learn that the literary world has been decidedly against this kind of investigative digging. Perhaps Ferrante’s unmasking feels like such a violation because her identity is exactly what we might expect. She is a translator in Italy, about the age we would guess at. In fact, her name has been batted around, as theories of Ferrante’s identity circulated over the years (along with Domenico Starnone, Goffredo Fofi, Fabrizia Ramondino, Marcella Marmo, and even her English language translator Ann Goldstein). My feelings vacillate here. I think both that the choice to remain unknown is a little coy, and that Gatti’s investigation is morally suspect.

Perhaps we can’t be blamed for curiosity about the genius behind the Neapolitan Quartet, but we should be blamed for pursuing that curiosity. The one way in which an unmasking would be justified is if the true facts were to shock us. If Ferrante had in fact never been to Italy in her life; if she were an American; if she were a twenty-something wunderkind; if she were a man; if she were a fascist. These revelations would be newsworthy reportage. Instead it seems impossibly rude to intrude on her privacy, when the face behind the mask is hardly different from the mask itself.

In Ferrante’s replies to perennial questions about her anonymity, she always implies that those who care too much about her identity don’t really love literature, or aren’t serious readers. She frequently calls upon the examples of Homer, about whom we know nothing, and Shakespeare, about whom we know very little, to demonstrate that an author’s empty biography does no harm to the art. “King Lear is marvelous even if all that remains of Shakespeare is a couple of signatures, some addresses, a will, a certificate of baptism, and a portrait that shows a man with the face of an idiot,” she says in the 2014 La Repubblica interview referred to previously. “Well, I see it exactly like that. Our faces, all of them do not do us any favors, and our lives add nothing to the work.”

But I find her explanation disingenuous. Isn’t it unfortunate that Shakespeare’s biography slipped through the cracks of history? It’s difficult to imagine his work being diminished for the audience knowing more about the creator. How much formal education did Shakespeare receive, and to whom were his fevered love sonnets addressed? Answers to these types of questions would both broaden our understanding of Shakespeare’s words, and provide helpful hints for aspiring writers. When reading a book, context matters. I enjoy a good biography and I think it’s important to understand the time in which a work was written.

In Ferrante’s case, though, couldn’t we have waited? I’m inclined to believe that the dead give up their rights. While we’re living, though, we can expect to keep reasonable secrets. And when Gatti discovered that Elena Ferrante was exactly who she appeared to be, he should have let the story die.

The lies Gatti believes he uncovered in Frantumaglia are based on a fundamental misunderstanding of the book’s project. He laments that Ferrante’s discussion of her childhood in Naples, with several sisters and a seamstress mother—a story that bears close resemblance to that of Elena Greco, the Neapolitan novels’ narrator—is at odds with the true life of Anita Raja, whose German-born mother worked as a teacher. But the book never claims to be a work of autobiography, or even non-fiction. Rather, Frantumaglia is a collage of fragments that give color to Elena Ferrante, the literary creation. They are Ferrante’s personal papers, not Raja’s; why should they be true? Instead of fact-checking fiction, we should admire Ferrante’s commitment to world-building. Like, say, Ben Lerner’s approach in Leaving The Atocha Station and 10:04, we can consider Raja more a meta-fictionist than a liar.

One notable moment in reading Frantumaglia within this context has been seeing that her husband, the novelist Domenico Starnone, has often been guessed as the real Ferrante. In a way I find the mix-up charming, that a couple living and writing side by side can begin to reflect each other’s voices on the page. But it’s upsetting to think that those who have long posited that the writer behind Elena Ferrante was in fact a man might feel vindicated in any way. It’s troubling how many critics still look for a man’s influence behind a woman’s writing, as if only the husband can be responsible for the wife’s genius. And the accusation never seems to arise in reverse—lots of married men produce fiction, but the literary world isn’t abuzz that their works should be rightly attributed to their spouses. In any case, it’s absurd to read a work about the subtle alterations and reversals within a female friendship over decades and to conclude that its brilliance and cool-headedness are distinctive of male writing.

Something I keep wavering about while reading this is how much harm is done to the writer? After all, achieving fame as a writer is different than other kinds of celebrity. Paparazzi rarely try to snap pictures of writers early in the morning, without their makeup on. No one is rifling through a novelist’s garbage. Writers have the luxury of scripting the terms of their own fame. It’s a way of being known that is mostly by name. When I worked in a bookstore in Southampton, I only recognized most well-known writers when it came time to swipe their credit card. (Tom Wolfe is the exception: that white linen suit.)

Is Gatti, unpleasant as he is, correct in saying that notoriety is just the price of success? If you’re well compensated, do you forfeit some right to privacy? I think Ferrante was entitled to that privacy, and am also unsurprised that it was violated. It may be unreasonable to ask for anonymity in art, when we’ve made anonymity in nearly every other arena untenable. As it’s impossible in most areas of the web to post anonymously, and as the NSA knows all about our banking information and correspondence, it seems increasingly unlikely that Ferrante could maintain anonymity in the face of such pressing interest in her work.

I wonder how Raja is coping with her unveiling. I wonder if she feels that sense of frantumaglia, Ferrante’s mother’s word for worlds splitting apart, the sense of coming undone that so many of her characters experience. Hopefully she can hold onto a sense of being unknown. Even if we now know another name for Elena Ferrante, we know very little of her private life. And I hope she is one day willing to publish again, otherwise Claudio Gatti will have much to answer for.