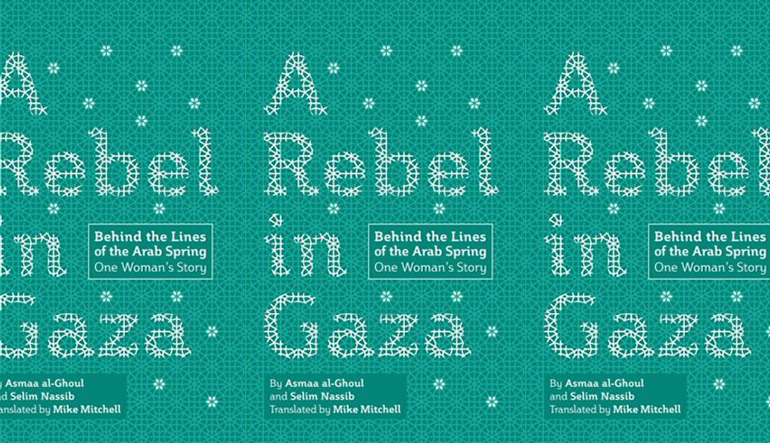 As a translator, I am often asked about contemporary Palestinian literature, and find myself, a liberal Jew from Israel currently living in the US, at an embarrassing loss. When I lived in Israel, I would often note the wall between Israelis and Palestinians—and I’m not just talking about the physical barrier. In certain parts of the country, Israelis and Palestinians may interact, even work together. But their personal histories, the ways in which their identity is shaped, their sense of security and belonging, is forever at odds. In other parts of the country—such as Tel Aviv, where I grew up—interaction is limited at best.

Recently, I found my foray into contemporary Palestinian writing: reading Nakba Light, an anthology edited and translated into Hebrew by Al’Tayeb Anaim and Yossi Granovski, and A Rebel in Gaza, by Asmaa al-Ghoul and Selim Nassib, translated into English by Mike Mitchell.

The stories in Nakba Light are written by Palestinian writers and writers of Palestinian descent, hailing from villages in the West Bank, from within Israeli territories, and from elsewhere around the Arab and English-speaking world. Their stories span the range of political, religious, and human subjects. When they discuss life under occupation, they do so with a kind of accepting sadness.

One heart wrenching story, “Three Defeats from Camp,” by Ziad Hadash, portrays a day full of misunderstandings and mistaken identities, leading to misfortune and a series of violent acts. One situation, though, never involves any kind of misunderstanding: when the Israeli soldier at the checkpoint tells the narrator to face the wall and lift his shirt, the latter knows exactly what he means. In another scene, two little girls feel like crying but cannot come up with sufficient reason; looking out their window, they recognize the losses and deaths of their future in the faces of the men on the street, allowing their tears to fall.

There is almost no anger in these authors’ voices, apart from a frustration at not being able to properly tell the story of the Nakba (the 1948 Palestinian exodus, translated literally as “the catastrophe. In the eponymous story “Nakba Light,” a group of young Palestinian writers attempts to put together an anthology of their families’ histories from the Nakba. The stories they manage to glean from their families never succeed in properly conveying the culmination of the disaster that befell them—perhaps because it is still unfolding. The editor finds himself cynically craving more pain and bloodshed from his writers’ lives, because without them the story just can’t work.

The other stories of the anthology, those without an explicit political bent, veer toward themes of existential angst and disorientation in a world brimming with the occult. From my perspective of curiosity, it was a simultaneously real and imagined picture of what normal, non-politicized life (if such a thing exists) looks like for young Palestinians today.

And therein lies the difference between Nakba Light and A Rebel in Gaza. al-Ghoul’s autobiography is full of anger, aggravation, and a sense of injustice. From growing up surrounded by Israeli soldiers who offered her candy while controlling her freedom of movement to searching for her child among the rubble of a bombed school; from a legal system in which a patriarch is appointed ruler and punisher of his household to a society of Hamas vigilantes who pursue women that walk outside unveiled—international journalist al-Ghoul has had to fight her way to self-expression, at the expense of her safety and the integrity of her family life. Pulled between the enemy within and the enemy without, she does her best to make sense of the chaos in which she has evolved.

I’d like to venture a guess that the major cause of this difference in attitudes between the two books has to do with the fact that al-Ghoul’s book was written by a Gazan. Which is why I approached it with dread. For me and many other left-wing voting Israelis, facing anyone speaking or writing from the perspective of occupied Gaza is nerve-wracking. On the one hand, I am appalled and ashamed at the fear, pain, and degradation of a life controlled by exterior forces, of which I am a part. On the other hand, I have been raised on Israel’s stories, built up by its against-all-odds narrative, am a seamless stitch in its patchwork of ethnicities, faiths, warmth, aggression, and good humor. Which means it hurts when anyone criticizes Israel, or Palestine, as well as whenever anyone tries to mask the aggression of each side’s government as mere self-defense. And it hurts as I write these words and a small voice inside of me sneers, “Boo-hoo, member of the occupying nation living comfortably elsewhere.”

I read both books with trepidation. I wanted to know, and yet I didn’t want to know. I already knew, and yet I knew nothing. It is one thing to watch the news and hear activists lamenting injustice in rallies. It is another thing entirely to read first-hand accounts. What I read in these books, I cannot unlearn.