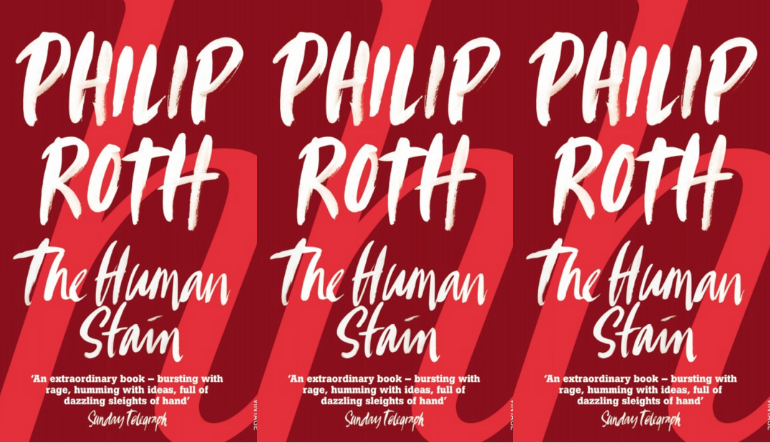 First impressions can be misleading. My initial reaction at reading the first page of Philip Roth’s novel The Human Stain was, “Ugh.” His famous narrator/stand-in, Zuckerman, was, right off the bat, lecturing me about how puritanical it was of the American people to condemn Bill Clinton for his affair with Monica Lewinsky. The tone was cold and condescending. I was considering putting down the book and surreptitiously giving the stink eye to my husband, who had described it as “amazing.”

Then I paused. Hadn’t I been lamenting my own ignorance about the Lewinsky scandal just the previous week? I’d inadvertently gotten on a kind of Clinton kick and was devouring Netflix’s The Nineties and the podcast Slow Burn. When the scandal had been uncovered, I had—embarrassingly—responded with a blasé remark about infidelity being the concern of the partners involved, not the public at large; these sources revealed to me that I had not been alone in this interpretation of the situation. Even in feminist circles, the abuse of power that now seems obviously condemning was not part of the conversation. People spoke about perjury, moral values, what constitutes a sexual encounter, and whether they’d like to sleep with the president. One White House staff member who used to work in college administration was disturbed by the resemblance that the case bore to the occurrence of professor-student affairs, but that was pretty much the closest anyone got to pointing out the issue at hand—that the most powerful person in the world was having covert sex with a subordinate in her early twenties. That she was in love with him and believed him to be in love with her. That she was willing to lie to protect him. That her career was effectively ruined. That because of the scandal, she became a joke.

The Human Stain was published in 2000, I reminded myself. I read on.

I came to find Roth’s book to be an in-depth, punch-in-the-gut study of the notion of judgment and blame-laying. It is the strange tale of a self-invented man who abandons his own personal history to reconceive himself and rise up the ranks of academia, only to be felled by a misspoken word that pegs him as racist, costs him the deanship, and leads to his resignation and withdrawal from society. In it, Roth (via Zuckerman) deals with questions of personal merit, morality, freedom of speech, and self-definition. He attempts to depict each of the characters honestly—the shamed professor; his hard-knock, illiterate lover; the lover’s murderous Vietnam veteran ex-husband; the professor’s estranged sister—only to keep coming up against a trait that just doesn’t fit, forcing him to go back to the drawing board and rethink his assessment of them. Philip Roth seems to be concerned with the very question of how we judge certain actions and phenomena in their time and through the lens of years passed. As he puts it:

The man who decides to forge a distinct historical destiny […] brilliantly succeeds at altering his personal lot, only to be ensnared by the history he hadn’t quite counted on: the history that isn’t yet history, the history that the clock is now ticking off, the history proliferating as I write, accruing a minute at a time and grasped better by the future than it will ever be by us. The we that is inescapable: the present moment, the common lot, the current mood, the mind of one’s country, the stranglehold of history that is one’s own time.

And isn’t that just what I have to face when reading Roth?

I’m hardly the first one to come up against this. While Roth is infamous for his intensely critical writing about his own Jewish heritage, the discussion about his problematic depictions of women has also been ongoing. He can write a gorgeously complicated and compelling female character like Faunia Farley in the same book where every other woman is difficult, alienating, or unthinkingly conservative (such as Delphine Roux, the young professor whose intelligence and success are eclipsed by her attraction-born resentment for the main character). He can delineate with such profound empathy a black man’s choice to live his life as a white Jew while also dropping in some over-simplifying offhand remarks about the nature of black and white. He can enrage and fascinate and alienate and enchant with his words, leaving me as confused about my opinion of him as his narrator is about his protagonist. Because while the first page of The Human Stain left me thinking “Ugh,” by the last one I had to let out a breathless “Wow.”

It is hard to argue against the intensity with which the novel leads readers to grapple with their innate judgments. My initial reaction to Coleman Silk was disdain—a pompous, self-important, aging, white man who gets upset when the world doesn’t instantly absolve his every indiscretion. When, midway through the book, the truth about Silk’s ethnicity is casually revealed (in a chapter aptly named “Slipping the Punch”) my impression of him was immediately altered. I judged my initial reaction. Then I judged my change of heart. My opinion about his affair with a younger, sexually-traumatized, uneducated woman shifted back and forth throughout the book, as did my levels of empathy toward her profoundly disturbed ex-husband. Throughout this, more than I was questioning Roth’s choices, I was doubting my own ideas and coping with my own biases.

It is one of the most common challenges of my adulthood—that people don’t cohere to clear definition or judgment. That anything and everything—and, hardest of all, anyone—can be seen differently through the lens of time and wisdom earned. A president can be both invaluable and destructive to women. An author can be both progressive and primitive in his views. A man choosing to lie about his heritage can be seen both as a free spirit and a traitor to his race. A professor using a word that has two meanings can be judged favorably or burned at the stake. His affair with a desperate woman can be seen as abuse as well as affection. A man haunted by visions of the Vietnam War can be seen both as a hero and a monster. Coming to terms with this multitudinous nature of humankind has made the task of navigating this world, deciding who to trust and which opinions to follow, incredibly challenging. It has also made this book that much more fascinating and complicated.

I felt, while reading, simultaneously irked and awed by Roth’s prose, appalled by the obtuseness of the fictitious university that took down a man for an allegedly racist remark that was clearly taken out of context and incensed by the book’s condescending attitude toward PC culture. I also felt disappointed with myself for my own difficulty in distinguishing book from author, writer from narrator, even as I insist that it is Roth—not Zuckerman, nor Coleman Silk or any other character, not even the voice in my head—who is speaking directly to me, while I read on, unable to stop.

With this confusion comes an opportunity. While The Human Stain seems to argue for the superpower of secrecy—a superpower of knowledge that can persuade and alter minds—real growth comes from coming to terms with the fact that people—as well as our judgment of them—will change over time. Social scientist Dolly Chugh uses the notion of “goodish” as an adjustment of our expectation of ourselves and our assessment of others. Defining ourselves as “goodish” is an invitation to do better and keep learning. Defining Coleman Silk or Philip Roth as “goodish” enables us to keep the good even while the bad bubbles up all around it; to maintain our criticism while acknowledging that which is invaluable in each of them.