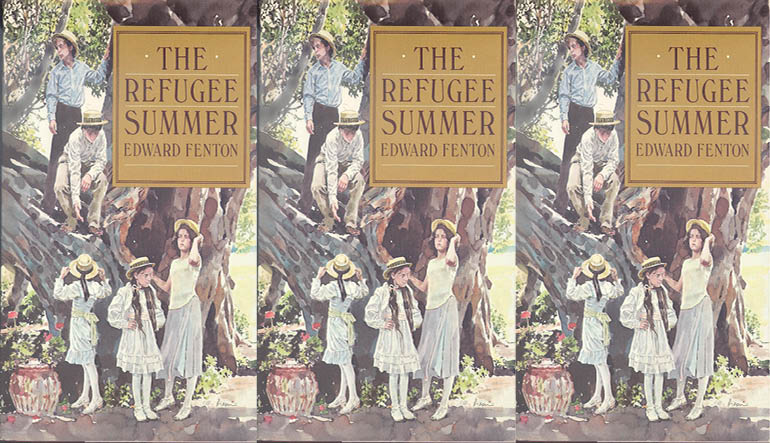 The book had been sitting on my shelf for years. My mother had given me Edward Fenton’s 1982 novel, The Refugee Summer, back when I was planning to move to Turkey a decade ago to research the Greeks of 1950s Istanbul with her usual, “You might find this interesting.” I took one look at the cover, which reminded me of The Boxcar Children, and the description (“The summer of 1922: Greece was at war with Turkish Anatolia, but in Kifissia, the suburb of Athens where Nikolas lived with his mother, the days were long and sleepy. Kifissia was elegant, but Nikolas was not.”), and thought, I don’t need some fictional account of the burning of Smyrna, no doubt biased and written by someone utterly besotted with the Megali Idea, in preparation for my own work.

But still, I never got rid of it. When I finally picked up the book and read it this summer, I was surprised by what I found. Fenton, who died in 1995, wrote a sensitive, truthful-feeling novel that surpasses the at times simplistic language and glossing over of sex. In actuality, The Refugee Summer is perhaps one of the better fictional accounts of living at the privileged periphery of a political and then refugee crisis.

Importantly, The Refugee Summer is also a children’s novel.

In his essay “On Stories,” C.S. Lewis wrote, “No book is really worth reading at the age of ten which is not equally (and often far more) worth reading at the age of fifty and beyond.” The only books we should find unpalatable as adults are those we shouldn’t have been reading in the first place as kids, he says, backing this up to say that we might not enjoy the taste of crème de menthe once we’ve had a taste of every other kind of alcohol, but we should still enjoy the simple pleasure of bread with butter and honey.

Lewis’ often misquoted sentiment points to an argument about what makes a book worth reading—a concept that he rightly points out is separate from a text’s literary value. The test, Lewis says, is whether someone returns to a book for a re-reading, no matter their education level or age. He believes that we don’t fully enjoy a story until our second reading, when the initial surprise wears off and we can fully enjoy the effect of the story or language.

In The Refugee Summer, a band of five children—the Greek boy, Nikolas; the American cousins, Oliver and Edith; and the French sisters, Nadine, and Stephanie—who style themselves “the Pallikars” (a take on the Greek word palikaria, or brave young men), take it upon themselves to do what is right in the looming shadow of the 1922 Greco-Turkish War in the quiet of the Athenian suburb of Kifissia, which then as now was an enclave of fancy homes and shops. The children are against anything that is terrible—not just the Turks, they say, but all grownups, even Greeks, who are profiting from the war. Their aim is to do “real good, secret good,” and in the style of many children’s novels, they come up with a secret language with codes for their work.

Fenton has a knack for highlighting the foibles of adults, from Stephanie and Nadine’s many “uncles” who are actually their mother’s lovers and patrons, to an impoverished Romanian princess who steals macaroons at a weekly party and assumes the worst when the children try to slip money into her purse. Adults are regimented and unimaginative, the book levels, but what it further highlights is that all of these Western expatriates have no idea of what is actually going on around them. Nikolas, the only Greek kid of the bunch, is often pulled away to read the war diaries of his now-dead neighbor, Manolis, to his illiterate widow and daughter, and it is in these diaries, which begin with a romanticism of war and patriotism that erodes away with every new trench and wound that Manolis encounters, that we see the blindness of the majority of the adults, especially those with money, to the sufferings of what the common person, who cannot retreat to a carefree suburb, faces.

In the end, what brings the summer to an end for both the children and the adults is the burning of Smyrna—an event that in the quiet of Kifissia. The Great Catastrophe marked the end of the Megali Idea, which promoted Greek expansionism to claim the Mediterranean coast of the dying Ottoman Empire based on the idea that all lands that had been inhabited by the Greeks should be part of the larger Greek state. As the key commercial port in 1922, and as a city that was more non-Turkish than Turkish, Smyrna was part of a region that had been a Greek colony from the eighth century BCE. Its burning was well-depicted in Jeffrey Eugenides’ Middlesex, and, in The Refugee Summer, it crowds in on the previously idyllic suburb.

Fenton does not shy away from mentioning the horrors of the catastrophe, including rape, though he spares his young audience by stating the case plainly, without description or embellishment. What drives it home is the appearance of two refugees, children who come to Kifissia and whom the Pallikars, in their one last deed before the group breaks up that summer, take in for a night and feed, after an attempt to feed other refugees that results in a soldier threatening them.

The adults, in the meantime, throw a concert to aid the refugees, something that seems constructed more to suit their vanity than to actually do any good. Nikolas, on the other hand, gives his fancy sailor suit, which his mother had made for him, to one of the refugee children; he is then stuck wearing his old winter suit that is too short in the sleeves. When asked by one of the girls why he did it, he says, “If you want to be a real Pallikar, . . . you have to make a real sacrifice. Otherwise it doesn’t count.”