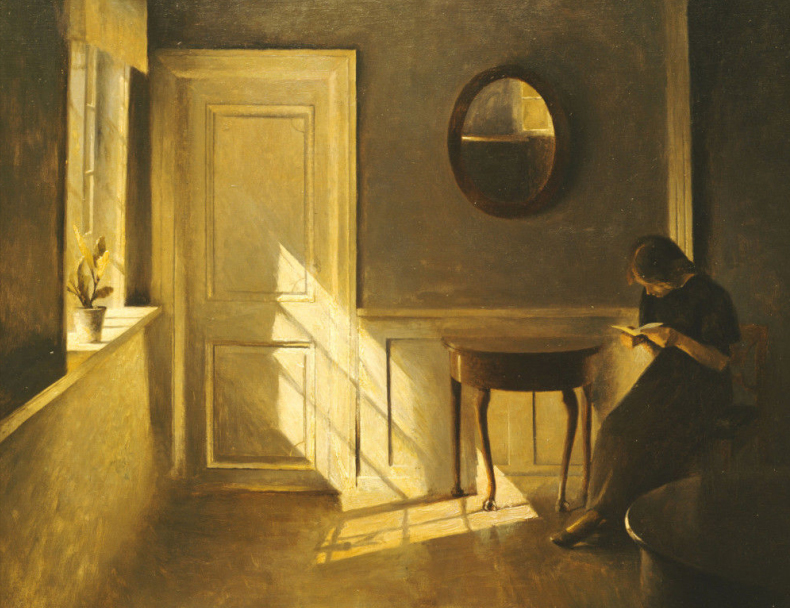 Two women staying in grand country houses lose their grip on reality as they attempt to cope with the unexplainable. Their breakdowns are each closely tied to a piece of art that is more than it seems—in one case, hideously tinted sheets of wallpaper; in the other, a malevolent picture. Yet Charlotte Perkins Gilman’s 1892 short story “The Yellow Wallpaper” is a feminist classic typically read as a depiction of postpartum depression compounded by the casual mental violence of misogyny, and Shirley Jackson’s “The Story We Used to Tell” (first published posthumously in the collection Just an Ordinary Day in 1996) is counted as another piece of genre work in Jackson’s remarkable horror oeuvre.

To be clear, there is nothing inherently misguided about either interpretation. “The Yellow Wallpaper” certainly contains more than enough subtext—and just plain text—to support a rational explanation for the unnamed narrator’s descent into madness, and Katharine and her friend Y in Jackson’s tale are without a doubt drawn into the mysterious picture in the old wing by supernatural means. Some of the frisson that binds these two eerie tales together is lost, however, when genre boundaries deem one realistic and the other fantastical. When read together, Perkins Gilman’s tale reveals the realism peeking behind the frame of “The Story We Used to Tell,” and Jackson’s short story illuminates the otherworldly horror plaguing the narrator of “The Yellow Wallpaper.”

A helpful tool for seeing these two works as part of a shared spectrum is the literary mode of the weird. Lacking allegiance to any one genre (although it’s often associated with horror and science fiction), the weird is instead a way of looking at our environments—or, more accurately, human attempts to interpret those environments. In “Toward a Theory of the New Weird,” Elvia Wilk explains that the weird can be defined as “the thing that literally exists but nonetheless resists linguistic description or cognitive explanation…dismantl[ing] the very tools of signification and representation that fiction depends on.” The weird also strips down the differences between the literal and the metaphorical, allowing weird narratives to function “on a very concrete level” that makes room for the absurd and unexplainable without any pretensions towards understanding.

As a story preoccupied with the breakdown of language and structures of meaning, “The Yellow Wallpaper” may be the perfect example of the weird’s power to refocus analysis of mainstream classics. The narrator begins a secret journal, because “dead paper” is “a great relief to [her] mind.” She’s desperate for any sort of confidante, trapped in an isolated country house after the birth of her child, with only her husband and sister-in-law for company. They refuse to grapple with her rising paranoia regarding the figures she sees in the “repellent” paper plastering her room.

The journal begins coherently, with the narrator referring frequently to her husband’s rational explanations for her depression and exhaustion. But as it goes on, she turns increasingly inward, rejecting his patronizing explanations and insisting that “[t]here are things in that paper that nobody knows but me,” one of which is “a woman stooping down and creeping about.” By the conclusion of the story, the narrator has given herself in completely to the lure of the wallpaper, ripping down yards of it and crawling on the floor like the woman she’s haunted by. “I’ve got out at last,” she cries to her horrified husband, “you can’t put me back.” The lines of communication that bound them at first have been fractured completely: he is trapped in his own world of masculine empiricism just as she has disappeared into the one beyond the wallpaper.

The standard reading for “The Yellow Wallpaper” is to interpret all of these events metaphorically. The wallpaper is a last-ditch escape for a woman reeling from postpartum depression and the mind-warping boredom of the “rest cure” (which Perkins Gilman herself endured after the birth of her daughter), and the woman in the wallpaper is the narrator’s suppressed rage, finally bursting out in florid madness. Still, there is something disquieting about the story, a lingering unease that can’t be explained away. Perhaps it is the malignity of the wallpaper itself, made up of “outrageous angles” that “destroy themselves in unheard of contradictions.”

This description of alien geometries incomprehensible to the human eye predates the cosmic horror of H.P. Lovecraft but feels very Lovecraftian in its insistence on the unknowability of evil (incidentally, Lovecraft thought so too, categorizing “The Yellow Wallpaper” as a tale of “cosmic fear” in his landmark essay “Supernatural Horror in Literature”). Attempts to chalk all of this eeriness up to manifestations of post-partum psychosis have never satisfied me, as a reader or a critic. Neatly dismissing strangeness with a diagnosis seems a disservice, not only to Perkins Gilman’s formidable grasp of the ghost story, but also to the complexities of human experience. Why, I find myself thinking, does it all have to be so explainable?

With the weird, it doesn’t. Taking its primary dictum—that many things lie outside of human comprehension—it’s possible to take the events of “The Yellow Wallpaper” at face value, seeing the narrator’s encounters with the woman in the wall as just as possible as a psychological break. It also raises the question of whether the rationality we gain by superimposing a medical prognosis over her experience is desirable. By diagnosing her, are readers demanding the same rationality and easy answers the narrator’s husband demands at the price of her mind and soul? In the end, this question seems to me to be the strongest argument for reading the short story as a weird tale. Challenging standard interpretations restores its essential unknowableness, the element that continues to bring me back to “The Yellow Wallpaper.”

If the weird, then, is most concerned with pushing the needle beyond what is expected and comprehensible, it is also possible to use this mode as a way to access the queasily familiar emotions lingering in “The Story We Used to Tell.” In many ways a narrative and thematic twin to “The Yellow Wallpaper,” it is also much more overtly fantastical. Narrator Katharine is visiting her newly widowed friend, Y, in Y’s husband’s family mansion. There is an old painting of the house in Y’s room that, like Perkins Gilman’s wallpaper, is imbued with a sort of reality-bending power, “with the windows of this very room shinning faintly through the trees, and the steep winding road coming…down to the very edge of the picture.” The women joke about the creepiness of the picture, and shortly afterwards Y disappears.

When she sees an old woman “hanging on the inside of the glass of the picture, gibbering,” Katharine follows her into the picture and becomes trapped along with Y, at the mercy of “some malevolence of the old house” embodied by the ghost of Y’s grandfather-in-law and the old woman he has already driven to insanity. Knowing they can never escape, Katharine and Y murder the couple, hang their bodies in the woods behind the house, and become siren-like figures, calling others into the picture with them.

“The Story We Used to Tell” is unquestionably weird, not only in its main conceit (a ghostly picture never explained by any internal logic), but, on a deeper level, in its depiction of Katharine and Y’s reactions to the situations they find themselves contending with. Returning to the idea of the weird as a vessel for the unfathomable, it’s worth asking what is more inexplicable in a horror short story: that mysterious and terrifying forces exist, or that, knowing they exist, human beings are still convinced that their feelings and beliefs are paramount, ignoring evidence that the natural order does not care for them at all?

When John, Y’s lawyer, suggests that Y may have taken her life because of grief, Katharine is adamant that that is something her friend would never do: “she was going to sell this house…try to start life over again.” Jackson never conclusively comments on Y’s mental state before her disappearance, emphasizing Katharine’s insistence on her convictions in the face of what may be reasonable evidence.  It’s a more sympathetic precursor to her and Y’s decision at the end of the short story to call John into the picture with them, letting their feelings of loneliness or predation govern their actions, despite clear knowledge of what the consequences of those actions will be. By the end of the tale, he “runs constantly about the house, screaming and beating the walls,” as unhinged as the grandfather’s first victim.

While the emotions driving Katharine and Y are as crucial to the plot as in any work of psychological realism, reading Jackson’s story weirdly reveals the nihilism and cruelty that emerge when human emotions do not have the central importance we are used to ascribing to them. In fact, these feelings are inconsequential at best and destructive at worst, and wholly insignificant in the face of unknowable evil. “The Story We Used to Tell” calls into question the universality of human feeling, just as a weird reading of “The Yellow Wallpaper” disputes the value of rationalism.

Seeing both tales as manifestations of the weird presents a final paradox. If neither rationality nor emotions are reliable ways to interpret human experience, what analytical framework does that leave us with? This is a question without answer, of course—a fitting enigma for a literary mode that draws no conclusions, regardless of whether those conclusions have to do with genre, style, or human existence itself. What it does provide is a creatively provocative way of considering the books we read and the world we live in. That will have to be answer enough.