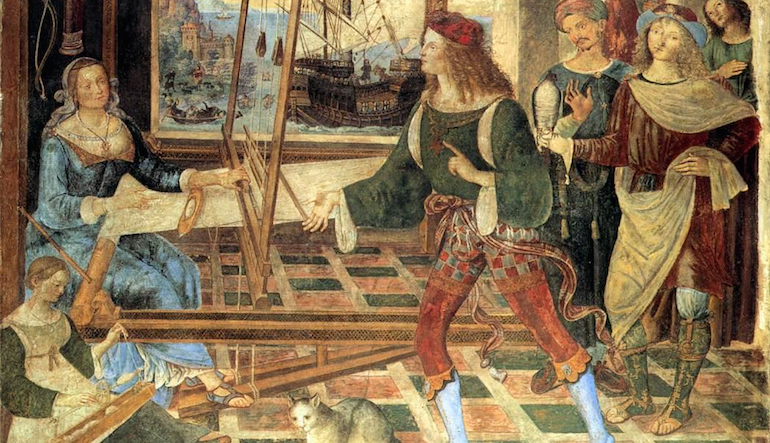 More months ago now than I care to recall, I finished a draft of the novel I’m writing. A rough draft, but still a full one, with some version of a beginning, a middle, and an end. It had taken several years of work to get to that point, and I knew there was much more to do, but a finish line of some kind seemed at last to be in sight.

Then came revisions for my story collection, and writing a new story for it. And various stints of travel for that story collection’s release. And a new class to teach, at a new university, and then another new class at a different one. And our four-year-old. And pregnancy, and then the actual baby. And somehow, in whatever free time I found, a lot of inertia. Life, in other words.

But now, having wrapped up most of the travel for the book, and teaching for the semester, and with the baby five months old and starting day care, it’s seeming like I might finally have the wherewithal to open that languishing computer file so my novel and I can greet each other again. So we can have a reunion of some kind.

In literature, a return to a previously inhabited place or state often becomes a means of measuring. Here we are, back in the same place, yet not quite the same. What has changed, and what hasn’t, and what does that balance of sameness and difference do to us?

It seems to me that there are two main versions of the tale of reentry. The first is the story of the one who returns. We watch the traveler come home again and realize that either home has changed or he has; the drama of the story lies in the traveler’s efforts to understand these differences, what they mean about himself and his world. This is the mode of The Odyssey. Ithaca, when Odysseus at last arrives after twenty years away, is overrun with his wife’s suitors; his home holds a grown son he hasn’t seen since infancy; the hunting hound he bred lies flea-infested and forgotten outside the palace door, so infirm that upon recognizing Odysseus he dies from the strain of his joy. The homecoming is characterized at first not by ecstatic reunion but by a sense of loss, and wariness. Once Odysseus has finally killed all the suitors and divested himself of his disguise, Penelope tests him, before accepting that he truly is her long-absent husband, by asking her servant to carry out his bed for him. Odysseus passes the test, but the rage it occasions in him is telling:

Woman, your words have wounded me. Who tore
my bedstead from its base? For it would take
a god—if he so pleased—to shift its place . . .
Within our court a long-leaved olive trunk
stood stout and vigorous, just like a pillar.
Around that trunk I built our bridal room.
[ . . . ] I made
that wood run true and straight, and it became
my bedpost. Once I’d bored it with an auger,
I, starting with that part, began to shape
the frame and, with that job well done, inlaid
my work with silver, ivory, and gold.
Inside the frame I stretched taut oxhide thongs;
their crimson shone. My secret sign is told.
Woman, I do not know if my bed stands
where it once stood or if by now some man
has sawed the bedstead from the trunk and set
my bed elsewhere.

There’s nostalgia in that rich recounting of the bed’s construction: here, Odysseus is saying, are all the beauties I planned and executed for our bed, for our marriage. He wanted decadence wedded to something simple and alive. His position at the start of this speech is that it would have taken a god to ruin the marvel he built; by the end he’s realized a man with a saw could have managed it (a man Penelope allowed into their bedroom, with all that such an entry would imply).

Penelope will clarify that she was only testing Odysseus—that the bed still stands where he left it—and that now she can accept he’s truly her husband; the kind of joyous, tearful reunion he longed for will follow. Still, his return is initially marked by an uneasy measuring of how far things have moved from where he left them.

The second version of the reentry tale belongs to someone who never left—to a character who greets the returned traveler. When the familiar stranger arrives, this stationary character too is sent measuring. Because usually the person who returns is not quite as the protagonist remembers, and has brought a new vision back that the protagonist also must train on his or her familiar life. George Saunders’s short story “Sea Oak” is an example of this pattern. Our main character is a male stripper at an establishment called Joysticks; he lives in a sad, unsafe apartment with his sister and cousin, both single mothers, and their babies, and his long-suffering Aunt Bernie, who picks up everyone’s slack. Aunt Bernie dies. Then she comes back to life, in a way—reanimated but still decomposing, and newly angry, and armed with a plan for how to change their situation:

She’s got dirt in her hair and dirt in her teeth and her hair is a mess and her tongue when it darts out to lick her lips is black.

“You, Jade,” she says. “Tomorrow you start work. Andersen Labels, Fifth and Rivera. Dress up when you go. Wear something nice. Show a little leg. And don’t chomp your gum. Ask for Len. At the end of the month, we take the money you made and the cock money and get a new place. Somewhere safe. That’s part of Phase One. . . . I never got nothing! My life was shit! I was never even up in a freaking plane. But that was that life and this is this life. My new life. Cover me up now! With a blanket. I need my beauty rest. Tell anyone I’m here, you all die. Plus they die. Whoever you tell, they die. I kill them with my mind. I can do that. I am very freaking strong now. I got powers! So no visitors. I don’t exactly look my best. You got it? You all got it?”

Sweet Aunt Bernie is festering, and so is her view of their lives. Death has enraged her and filled her with a sense of urgency. She won’t let them limp along as they have been any longer; she has a plan, which she forces on them. In the process she also forces them to see their lives, up until this point, as she now does: as wasteful, as shameful, but ultimately also as changeable. This is a revelation that will outlast Bernie herself.

I’m not quite sure which of these two models might apply to my period of reacclimation to my novel—whether I am returning to it or it is returning to me. I am hopeful, though, that the time apart will have served somehow to sharpen my vision. I want to see us both clearly enough to understand what can carry us through, this time, to the end.