Home
»
Critical Essays
»
Reimagining Immigration in a World of Portals 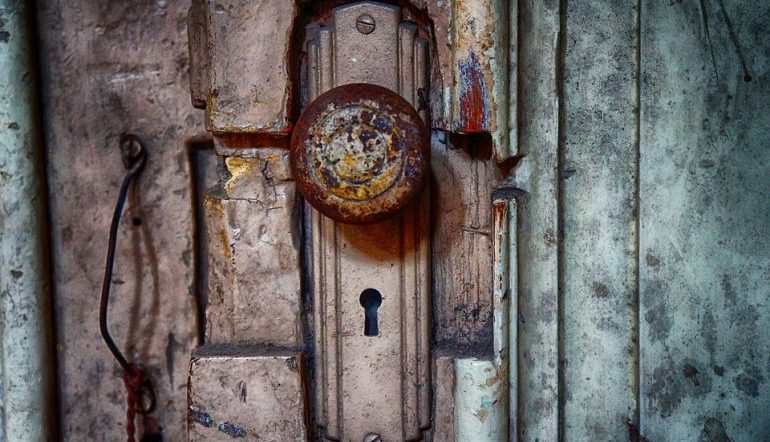 I would argue that there is on one hand literature that allows readers to escape reality, and on the other hand literature that forces readers to see their reality more clearly. Mohsin Hamid has accomplished the latter in his imaginative novel published last year, Exit West, and it is all the more relevant and illuminating to the current immigration debate.

The novel opens in “a city swollen by refugees, but still mostly at peace, or at least not yet openly at war.” With the actual place kept unnamed, it reads as a universal love story set against the outbreak of war. When violence spreads, Saeed and Nadia decide to leave loved ones behind and exit their homeland through a secret doorway they have discovered can transport people to faraway countries. From Mykonos to London to Marin, California, the couple finds their way through these mysterious portals to ever-safer ground and adapt to the challenges of their new homes.

“I wanted to explore the question of, what made you want to leave, and what happened when you arrived?” Hamid said in an interview with National Public Radio. “I was less interested in the journey of how you went from place to place. And the doors were a way to avoid that.”

The use of portals to represent the journey out of danger makes sense, for how else to capture the factors of luck and unpredictability that determine who finds refuge (and who does not) in the face of war and chaos? Who would decline passage to safety if the opportunity suddenly opened? And how to acknowledge that, for even a country striving for impenetrable walls at each border, there are always forces beyond control (the unstoppable quest for safety and freedom, human nature, being one). Doorways inevitably—if somewhat arbitrarily—appear in unexpected places, both in this fictional world and in life.

It is also fitting to represent the journey to safety as a painful and difficult one that nobody would consider except under dire circumstances and that entails acute hardship. Of Nadia’s experience going through the portal, Hamid writes:  “It was said in those days that the passage was both like dying and being born, and indeed Nadia experienced a kind of extinguishing as she entered the blackness and a gasping struggle as she fought to exit it….”

Through relatable storytelling interspersed with magical realism, Hamid enables us to imagine a scenario where “natives” and “newcomers” have little choice but to find solutions to live together peacefully. As many differences as they have to bridge and maneuver through in each place they settle, Saeed and Nadia discover that “the only divisions that mattered now were between those who sought the right of passage and those who would deny them passage.”

This notion of how we delineate our borders—who is granted passage at the gates, who is turned away, and why—is one that Toni Morrison touches on in The Origin of Others, based on a series of talks she gave in the spring of 2016 on “the literature of belonging.”  She describes how mass movements of people bring about a sense of disempowerment among people who feel left behind in a modern, globalized world:

The spectacle of mass movement draws attention inevitably to the borders, the porous places, the vulnerable points where the concept of home is seen as being menaced by foreigners. Much of the alarm hovering at the borders, the gates, is stoked, it seems to me, by 1) both the threat and the promise of globalization; and 2) an uneasy relationship with our own rapidly disintegrating sense of belonging.

I find Morrison’s words apropos to today’s political climate and especially the immigration debate. It is no coincidence that the white rural working-class voters of Trump’s base who feel disempowered comprise some of the loudest voices in the anti-immigration movement. Many of them associate immigration with a threat to their way of life and their idea of America, and they cheer Trump’s way of framing the issue as an “us vs. them,” zero-sum paradigm.

I wonder how we can approach immigration with the kind of insights that Hamid and Morrison offer. What if we accepted that the quest for safety is an undeniable part of human nature, that it lies within the very foundations of our country? That much of the opposition to immigration is generated from fear? What if we focused less on the countries of origin and the circumstances of arrival, and instead focused on how best to provide safety and order for all? What kind of nation could we be?

In Exit West, there is a turning point in the tensions between the new immigrants and those who wished for their departure, a point where, they realized, the question of “us vs. them” becomes as much about “us” as “them”:

Perhaps they had grasped that the doors could not be closed, and new doors would continue to open, and they had understood that the denial of coexistence would have required one party to cease to exist and the extinguishing party too would have been transformed in the process, and too many native parents would not after have been able to look their children in the eye, to speak with head held high of what their generation had done. Or perhaps the sheer number of places where there were now doors had made it useless to fight in any one.

In the end, our response to immigration hinges in large part on our ability to identify with the circumstances of others as our own. Hamid said in a recent interview with The Nation that “the space for empathy opens up” in recognizing the universality of experience:

And that means we can recognize the refugee not as some strange other person who’s had a weird experience of crossing the Mediterranean on a boat, or crawling under barbed wire to Texas, but instead we see somebody who’s had an experience that emotionally reminds us of our own experience.

Recognizing the universality of experience, opening the space for empathy—this is what Exit West and other great works of literature do well, and what I think our national discourse desperately needs.

Tags:Exit West, Mohsin Hamid, The Origin of Others, Toni Morrison