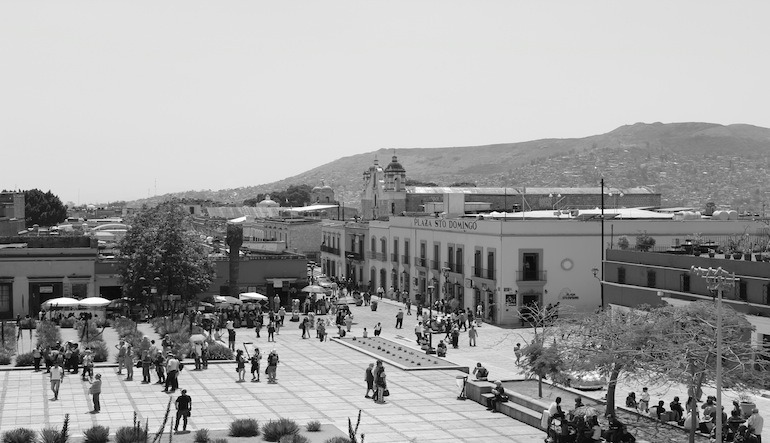 One of my favorite books of all time is Out of Sheer Rage by Geoff Dyer, a nonfiction account of how Dyer attempts to write a biography of the nomadic D.H. Lawrence while he globe trots, but ends up writing a memoir about his own travels instead. How fitting: when I looked up “famous writing about Oaxaca,” one the first results that surfaced was Mornings in Mexico by D. H. Lawrence, and now I am writing about my own travels as well. In this literary chain, we have two old white men surveying Mexico—well, one of those men is just surveying the other guy surveying Mexico—followed by me, a young, Indian woman, whom most strangers in Oaxaca assumed was Mexican. Yet another difference between me and the aforementioned travelers: even without speaking a word of Spanish, I blended in, and they did not.

Our own visibility determines so much of how we experience a city. When I was in Japan, I noticed locals would attempt to talk to me if I was sitting alone during lunch. One guy even offered me a bite of his omelet, which I gladly took. But in Mexico, nobody looked at me and wondered why I was there; there was no mystery. The only one with questions was me.

I guess D.H. Lawrence might have blended in; if the sun had rendered him tan enough, people may have thought him one of those not-so-indigenous-looking Mexicans. But his British stoicism must have given him away. When digesting the norms of Oaxacans, Lawrence is first startled and disturbed, then impressed, and ultimately in awe—with the expected doses of early 20th-century casual racism along the way.

I always struggle with this kind of language, especially when reading British male writers from colonialist times. How much of this book’s wisdom can I actually digest? Will any of it apply to today’s mad, mad political situation? Will it apply to women? Is it even worth reading? I must admit that I wouldn’t have picked it up if I wasn’t going to Oaxaca and seeking non-guide book literature about the city.

It turns out D. H. Lawrence is actually quite woke and ahead of his time. He writes: “The commonly healthy vulgar white usually feels a certain native dislike of these drumming aboriginals. The highbrow invariably lapses into sentimentalism.” Is this not the difference between the no-secrets-here racism of red states, and the smug liberals of the Northeast? There is a widely-loved scene in Chimamanda Ngozi Adichie’s Americanah which illustrates this sentimentalism. Ifemelu’s white boss, Kimberly, keeps sticking the adjective “beautiful” in front of any mention of a black woman, until Ifemelu has to tell her something to the effect of: Chill, we can be ugly too.

Lawrence also touches upon differences in morality, which eerily resemble today’s debates on welfare, including the Affordable Care Act. “If an Indian is poor, he says to another: I have no food. . . . Then the other hands the hungry one a couple of tortillas. But then the white monkey comes round, they peer at the house, at the woman, at the children. They say: Your child is sick. . . . What have you done for it. Nothing. What is to be done? You must make a poultice. I will show you how.” And if you still can’t feed your family or cure your child, that’s your own fault, not a result of our own institutionalized prejudice, so don’t mooch off our tax money (my continuation, not his). He stops short of questioning whether Western mythmaking about indigenous people—that they are lawless savages that need to be tamed and clothed—is a justification for imperialist cruelties, but acknowledges, albeit vaguely, how colonialists had flattened these human beings into caricatures: “When you’ve de-bunked the Cowboy, there’s not much left. But the Indian bunk is not the Indian’s invention. It is ours.”

Let’s not applaud Lawrence for coming to the realization that indigenous people are actually people, though. I’m honestly not even sure he does. I like Mornings in Mexico because it’s fascinating to see how a place and its people disarm a man so entrenched in Western ways of thinking—particularly the “horrible, truly horrible, monkey-like passion for invisible exactitudes”—not that it did so. Lawrence writes about how the Mexicans he met thought of time as morning, afternoon, and night, not in hours. (This laissez-faire approach to time persists in Oaxaca, and is such a treat for overworked New Yorkers.) Same with distances and money: there was only near and far, to have or to not have. These invisible exactitudes can also apply to learning, like when I asked myself how this book would apply to me, and what I would gain from it. I gained a lot from the book, and from Oaxaca, but I can’t measure it; perhaps that’s the point.

I was in Oaxaca for a writing residency with the New York-based Blue School. So I guess that’s something Lawrence and I share: we are both writers seeking inspiration from a place so different from our respective homes. Our differences in race, gender, and time period felt irrelevant when I realized we were both doing our best to articulate our observations and slow-germinating thoughts on politics, culture, identity, and the architecture of Mexican cathedrals. (We both also got pretty ill; he with malaria, me with food poisoning, so there’s that, too.) He starts his book on Mexico with this image contrasting big ideas with everyday moments, and I will leave this essay with it, too:

“It is a pity we don’t always remember this. When books come out with grand titles, like The Future of America, or The European Situation, it is pity we don’t immediately visualize a thin or fat person, in a chair or in bed . . . making little marks on paper with a fountain pen.”