Home
»
Critical Essays
»
Repeat After Me 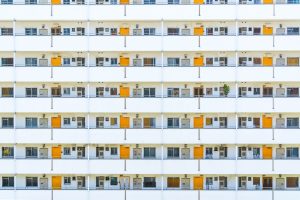 HOW CAN ANYBODY HAVE YOU?

HOW CAN ANYBODY HAVE YOU AND LOSE YOU?

HOW CAN ANYBODY HAVE YOU AND LOSE YOU AND NOT LOSE THEIR MINDS TOO?

—St. Vincent, from the album masseduction

The chorus of St. Vincent’s recent single “Los Ageless” is simple; it sprouts from an independent syntactic unit, a rhetorical question—HOW CAN ANYBODY HAVE YOU?—that’s redefined by two additional clauses consecutively grafted onto the end of the originating rootstock after its successive repetition. She uses the opening phrase, a complete question in and of itself, to ask a total of three separate questions, easily summarized: 1) how can anybody (stand to) be with (and/or presume to possess) you?; 2) how can someone who’s been with you (you who’s so good, amazing, wonderful) do something (stupid) that would ultimately cause them to lose you?; and 3) how does one get (or, rather, not not-get) over you? The unfolding nature of these questions reveals the broad arc of this relationship’s narrative, despite the fact that the speaker never explicitly associates herself with the role of the “anybody.” Although we might presume that all questions are asked after the split—the song’s immediate present—the first question might have been asked at any point in their relationship, implying the speaker’s long-felt and ongoing bewilderment.

Art rock lyrics momentarily aside, anaphora, the repetition of the same word or phrase at the beginning of a sentence or line, is one of the most accessible tools in the poet’s toolbox, one that translates nicely to all levels of poetic craft instruction and experimentation. Edward Hirsch, in A Poet’s Glossary, counsels us that “words accumulate mysterious power and resonance through repetition”—have you, like I have, ever repeated the same word over and over again until it dissociates from meaning and becomes mouthfeel and sound, e.g. banana, banana, banana, etc.?—and that the “key to anaphora is that each line is a repetition with a difference.” Joy Harjo’s “She Had Some Horses,” titular poem of her 1983 collection, demonstrates this very experience in its first section, which begins:

She had some horses.

She had horses who were bodies of sand.

She had horses who were maps drawn of blood.

She had horses who were skins of ocean water.

She had horses who were the blue air of sky.

She had horses who were fur and teeth.

She had horses who were clay and would break.

She had horses who were splintered red cliff.

With every line in this first stanza, Harjo works at compelling cross purposes, paradoxically reiterating through repetition the horses’ realness while also transforming the horses again and again through the anaphoric variation. Throughout the section, Harjo also uses the unmodified “She had some horses” between stanzas as a refrain, not quite a reset, not quite emphasis, but more a thematic access that contains all versions of the literal and figurative horses. Here, the horses are animal, and they are all the other things someone—the speaker, the reader, or the she—sees in them.

Like Harjo, some poets use repetition, specifically anaphora, to enlarge, expand, and complicate an idea, circumstance, or image—to allow for its polyvalency, for the multitudes it contains. Other poets use repetition to underscore an idea or to demonstrate an obsessiveness or anxiety about its subject matter. St. Vincent’s anaphoric chorus, for instance, suggests the speaker’s inability to stop thinking about the you or reconcile the end of the relationship. There are certainly connections between repetition of all stripes and poetry’s orality, its ancient history as an oral art form: repetition is mnemonic. Anaphora may also shift a reader’s attention to the language of a poem and less on the meaning of that language, to make that language strange again, compelling. Anaphora also nuances our relationship to the repeated information. Language that’s repeated either increases in volume or else it’s diluted; we pay attention to it more because it’s repeated or else we pay attention to it less.

Whatever the reason for a poet’s use of anaphora, however, it’s also important to recognize the pleasure of the repeated word or phrase. In her Poetry Foundation article “Adventures in Anaphora,” poet and creative writing educator Rebecca Hazelton writes, “Humans are pattern-seeking animals, pre-tuned to the music of language. We are pleased when we hear patterns in language, perking our ears in recognition, and can be both vexed and delighted when those patterns are broken.” Anaphora, then, reiterates the musicality of language,  pushing it beyond its status as a collection of signifiers and demands that we hear, not just understand, the poem; it establishes the agency of sound as a signifier in a poem—it’s not just an artifice or ornamentation but it’s an autonomous vehicle of information.

Readers of anaphoric verse might ask themselves a few questions as they encounter each iteration of this poetic device: Why would the poet take up so much real estate in a poem for this single word or phrase?  Is the use of anaphora economical, as St. Vincent’s “HOW CAN ANYBODY HAVE YOU” is? Is that word or phrase complicated or simplified by the repetition? Does it engage or disengage with its subject matter? Is the anaphoric unit the most or the least important part of the poem? Does the repetition feel fluid or tedious? Does it establish a dynamic through pattern and variation? Above all, the experience of reading a poem that relies heavily upon anaphora is a lot like riding an ocean-going vessel until you develop sea legs, expect the regular rise and fall of the waves; once you step back on shore, you might still feel (or expect) the sea heaving underneath you.