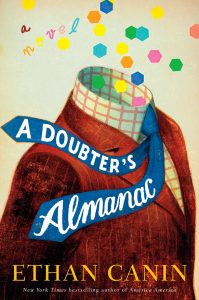 Mathematicians toil in obscurity, often for years, at work that will probably come to nothing. It doesn’t take a Fields Medalist to understand why a novelist, that most uncertain toiler of all, would be drawn to such a plight.

Milo Andret, the genius at the center of Ethan Canin’s A Doubter’s Almanac, sacrifices domestic tranquility and ignores social norms in the pursuit of solving “mankind’s great puzzles.” His Princeton colleagues hate him, and for good reason. Milo is an alcoholic, a liar, a womanizer, and an egomaniac. Tragically, his single-mindedness is no guarantee of success. Milo loses a cushy job, alienates his wife and daughter, and suffers through a grotesque late life illness, all while chasing that one elusive accomplishment he needs to secure his legacy.

As a former math major, I was heartened by Canin’s rendering of Milo’s world. The professors speak like professors I knew (“Submanifolds of complex projective spaces—it’s a famously difficult problem, young man”). Milo’s lifestyle has a recognizable effect on others (“Why can’t he just be like everyone else? Why does he always have to be working on something?”). And although he’s curmudgeonly and competitive, Milo has enough humanity to respect his most talented peers, like the great itinerant mathematician Paul Erdos. Canin gives us a milieu that feels both lived in and new.

Perhaps even more impressive is how Canin enters the mind of the tortured savant. Milo constantly worries that his best work is behind him, and this handwringing takes him all the way back to childhood. As a boy, Milo carves an intricate chain from a single piece of wood that flummoxes even adults. Is there anything more precarious than a prodigy? Childhood is the genius’s only chance to do more than is expected, a conundrum Milo feels all too acutely later in life. He keeps the wooden chain until his final days.

Dissatisfaction is the mathematician’s wont (and the novelist’s, as I’ve learned writing fiction these dozen years). Milo’s son, Hans, a fine mathematician in his own right, says that happiness “felt like lethargy—like a distant, narcotic stillness that laid itself over my unease.” He adds that a disquiet “had for so long existed within me—a disquiet that I’d hardly noticed, strangely, until it began to wane….”

Is this “disquiet” inescapable for some of us? For tortured minds drawn to problems with the most out-of-reach solutions? And if so—if the cost of travelling this vainglorious path is too great even for Milo Andret—what does that say about novelists and mathematicians who wouldn’t deign to aspire to a Pulitzer or Fields? I don’t know. But after reading the 551 empathic and forgiving pages Canin has crafted, I’m compelled to keep typing.

Matt Matros is the author of the nonfiction narrative book The Making of a Poker Player. His writing has also appeared in The Washington Post, CNNMoney.com, Mental Floss, Tremr, CardPlayer Magazine, Spectrum, and The Westchester Review, among other places. Matt lives in Brooklyn with his wife Ivy.