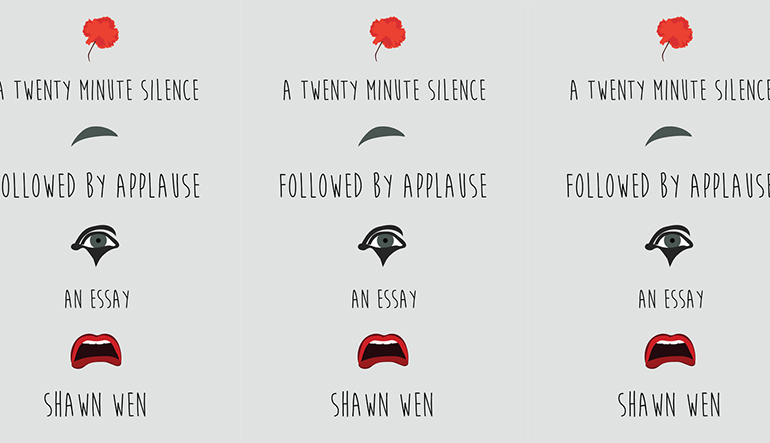 Every hero movie has this moment. You know the one. The dragon is charging and the prince can’t reach his sword. It is twenty men against one young girl. The love interest, radiant and free, stands at the end of a long road—all smiles, not sensing the disaster approaching in the background. It is the ultimate test, the thing that will transform our protagonist from lucky to legend.

When world-famous mime Marcel Marceau is out of sticks, he says, “I’ve worked like a horse and I’ve failed in my life.” Life, though, is not a fairy-tale, and the dragon that won Marceau was his debt. After his death, auctioneer Rodolphe Tessier hosted a court-ordered auction with nine hundred of Marceau’s treasures and trinkets: “paintings, religious icons, clocks, books, knives, wooden dolls, masks, five sailor suits—in gray, navy, white, cream, and black and white—the battered top hat with a single red rose, and a black chair painted with the words ‘Bip’s dreams.’” It was the “only way to pay back almost half a million Euros in loans.” Tessier, in compassion for the Mareau family, “priced the items low, to all but guarantee that everything would go.”

Part history, part inventory, part pantomime of famous scenes, Shawn Wen aims for a holistic view of the mime and the man with her book-length essay A Twenty Minute Silence Followed By Applause. Published through Sarabande Books—a great ally for authors whose pieces do not conform to a single genre—Wen uses research, interpretation, and speculation to illuminate Bip’s dreams, and nightmares.

Contrary to what logic might dictate, Marceau was not silent at all about his work or his reputation. Wen quotes Marceau as saying, “I know what I am worth. If Marcel Marceau did not know what he was worth, he would be in trouble.” Marceau, too, had many thoughts about the future of his craft, arguing that the best way to create quality mimes was through apprenticeship. After ten years of lobbying with the French government, France gave him two hundred thousand dollars to create his own mime school. “I knew I would die one day,” Marceau said. “I didn’t want people to say, ‘Oh, he was the only mime in existence.””

Throughout A Twenty Minute Silence, Wen provides sound bites with titles such as “M. on Marceau,” “M. on Mastering One’s Feelings.” One vignette is dedicated to Michael Jackson, what may seem like an odd tear in the time-space continuum when one considers Charlie Chaplin. (Were Marceau and Jackson even alive at the same time? Oh, Marceau only died in 2007?) Chaplin himself is featured twice, with “M. on Chaplin II” as perhaps the most touching passage in the book.

In Paris, Marceau recognizes a wilted Chaplin at the airport. It’s 1967, “more than fifty years after the first Little Tramp film and thirty years after the last.” It’s “fifteen years after he left the US for what he thought would be a brief trip” only to find he was “not allowed back in.” It’s 1967, and Chaplin’s body is eighty years old. Marceau, at this time, is in a good place, career-wise. He sidles up to Chaplin, makes some chit-chat.

Then the dance begins: Marceau imitates Chaplin’s iconic character, and Chaplin mirrors Marceau’s mirror in kind. It is two men doing what they have done all their lives—speaking without words, using their bodies as instruments.

How does it end? Like this, with Marceau “knees to the ground,” with the Tramp’s hand in his own, kissing it. When he looks up, he sees “Chaplin’s cheeks wet with tears.”

Marceau married and divorced three times. His connection with his family, as well as feelings toward family as a concept, is loose at best. However, Wen includes a pause for Pierre Verry, Marceau’s “Presenter of Cards” from 1952 to 1979. If Marceau’s mission was to be silent, Verry’s was to be all but invisible:

Marceau was a particular man. The card must be held completely straight, while Verry’s arm dangled at an awkward angle, as if halted midstep.

During a typical performance, the lights would come up and a “petrified” Verry would stand “holding a black board with white lettering: The Cage. The first clue.” His duty was to serve his purpose then vanish from memory: “The lights faded to black over Verry, and when they rose again, there was Marceau.”

If Marceau as a performer and a French man was cheeky, brilliant, and impossible, it seems no accident the title of Wen’s collection is what it is. In “M. on Speech,” she stops us from dangling:

There’s a joke that Marcel Marceau released an album. The record consists of twenty minutes of silence followed by applause.

Odd and delightful, A Twenty Minute Silence Followed By Applause is an artful character study, entertaining portrait, and comprehensive investigation of a great modern myth.

Annalia Luna is a contributor at HTML Giant. She earned her B.A. in Literature & Music from Butler University. Her work has been published or is forthcoming at The Rumpus, Literary Hub, and elsewhere. She lives & writes in Houston, TX.