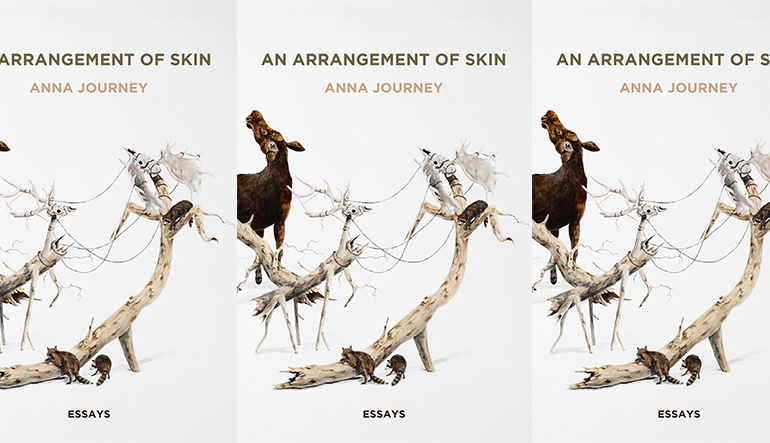 Sometimes being a poet means something inside you snaps, but not like a balloon too close to the ceiling. It bends and begs and burrows, and you, flailing like a sad firefly, break all the things you’re not supposed to break, trying to find it. You start with the things that keep you sane, and move outward, until the most feral version of yourself is alone on the phone with a stranger.

You call a stranger because of the shame, or because other lines have been cut. You’ve cut them, with the breaking. Except the phone call isn’t really about the things you’ve done—it’s not about the recitation. It’s asking someone, anyone, if you can still exist apart from your mistakes. Can you see me? Can you hear me?

For Anna Journey, it starts at the University of Houston, during the last year of her PhD program. Away in Richmond, Virginia, for a literary conference arranged by a close friend and mentor, Journey begins the affair that will end her seven-year relationship.

It’s not messy, at first. Journey breaks up with her boyfriend, and this other man is not the reason. They even continue to live together because they “knew that one—or both—of us might not finish up if we suddenly abandoned our routines.” They “slept in separate bedrooms but met up nightly for dinner as [they] finished the final months of [their] respective graduate degrees,” she in creative writing and literature, he in bass performance and pedagogy.

When they fly home to see their families for Thanksgiving, two weeks before they would both leave Texas, all their possessions are divided and packed away, “each [cardboard box] with either my name or his and our different destinations.” Then, Journey’s friend and mentor who arranged the conference, her closest confidante, “emailed me an ugly, judgmental diatribe,” which she knew “from the gratuitous details—dates, locations, hotels” had been blind copied to her roommate ex-boyfriend.

He calls, and it is the last time they will ever speak. Journey defends her dissertation the next day “in a pursed-smile stupor,” caught up about getting kicked out of her apartment and her friend’s betrayal. In the title essay, she writes:

Afterward, instead of celebrating my years of hard work in graduate school and the fact that I could now plunk ‘Dr.’ in front of my own name, I returned to collapse on a friend’s mattress, with her silver tabby, Slider, watching the cat chase phantom mice among the amber patches of her quilt.

Some time later, Journey calls Houston’s local suicide hotline, which is where the book opens. Throughout An Arrangement of Skin, Journey revisits this dual betrayal, in essays that must have been written over the years—a theme and its variations. Sometimes she names the beloved ex (Carrick) and the traitor mentor (Lee) but the most compelling passages are when Journey allows for them to stray from the roles she’s made for them.

One such moment is when she reveals she managed to rescue her relationship with her former mentor. After she had been living in Los Angeles for a year and a half, he reached out to her via e-mail and Journey says she “knew this gesture—defensive, contradictory—was as much as he’d ever be able to offer.” Not free of bitterness, she mourns him “never [apologizing] for abandoning our friendship or for ratting me out to Carrick for my affair,” but also mentions they “hang out” in mixed company (their spouses are always present) and speak on the phone once or twice a year. She only mentions this resolution in one essay.

The most tender moment with Carrick is buried in the last third of the book, in an essay framed around the upright bass, Carrick’s instrument of choice. The two of them have been separated but living together for a couple months, and she performs the girlfriend-type duties at his final recital. She left her “aisle seat early to meet the delivery guy who was scheduled to bring several aluminum troughs of pulled pork, brioche buns, and coleslaw for the after party,” stayed until they were the last car left.

Excited from the rush of performing, he suddenly grabbed my hand, and swung it back and forth through the air as if we were kids charging across a playground. “Let’s give things another shot,” he said, turning to me. I looked away and shook my head. “I can’t,” I answered, letting go of his hand.

Here, the reader is left to wonder if the “can’t” is Carrick or because Journey’s lover (future husband) is waiting for her, and Carrick has yet to know.

There are other threads in the book—taxidermy (“Birds 101” and “Modifying the Badger” are intense in their detail of the process, terms, and tools), family stories, a quirky friendship with a tattoo artist, one childhood peer who turned out to be a murderer (“The Goliath Jazz”)—but the overarching theme is an attraction to the morbid.

In “Epithalamium with Skunk Pigs,” an essay about myths and marriage and muses with red hair, Journey talks about the Cigarette Game she played with her childhood friend Laura. A form of chicken, the girls would “drop a lit Newport or Camel, lengthwise, between our forearms, and press our flesh together,” burning each other until one of them would jerk away.

Fractured, fragile, and fantastical, Journey uses etymology, odd acquired knowledge, and poetry to illuminate one dark year, and her slouching toward forgiveness.

Annalia Luna is currently a contributor at HTML Giant. She earned her B.A. in Literature & Music from Butler University. Her work has been published or is forthcoming at The Rumpus, Literary Hub, & Heavy Feather Review. She lives & writes in Houston, TX