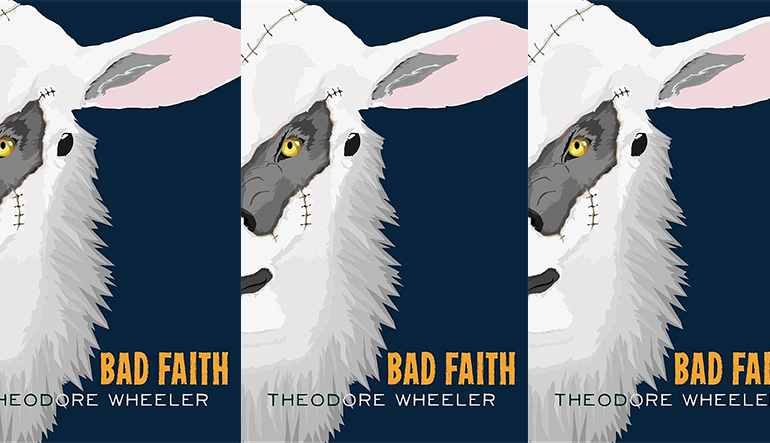 “He wasn’t built to take care of people,” Theodore Wheeler writes about Aaron Kleinhardt, the shaggy-haired, 32-year-old protagonist of Bad Faith’s opening story. Claiming to have studied history in college, Aaron has been tramping around for most of his life but has returned home to Jackson, Nebraska, to help his father who is dying with cancer—whether his father wants him there or not. The two have never had an easy relationship. Not since Aaron’s mother left. Not since Aaron ran away at age 15, eventually being sent to Boys Town. And certainly not every time someone in Jackson reminds Aaron that he’s “the one person in the world who was inexorably tied” to his father.

Isn’t that always the way? The people we’re the most like, the ones we’re most connected to are the ones we most struggle with. We fail them, and they fail us. It shouldn’t be a surprise that parent/child relationships are a natural catalyst for this phenomenon, and many of the stories in Wheeler’s collection reflect those particular failures. Wheeler explores the possibility that if characters like Aaron aren’t built to take care of people, it’s probably because their parents weren’t built for it either.

Bad Faith is Wheeler’s first full-length collection of short fiction. (A novel, Kings of Broken Things, is forthcoming in 2017.) In eight stories and seven vignettes, Wheeler travels into the cities of Lincoln and Omaha and out to smaller towns with names like Valentine, Alliance, and Bancroft, depicting a vision of mostly contemporary Nebraska that is often tragic.

The pain we inflict on each other isn’t restricted to parents and children. Lovers, of course, perform competing acts of terror throughout the stories in Bad Faith. Wheeler even takes the idea to an incredible new level in “The Current State of the Universe,” which explores the idea of the “etiquette-revenge business” going truly commercial. As an employee explains, “The point of our business is to make the ill-mannered aware of how it feels to be treated poorly. It’s the little guy—the overweight, retarded, crippled, or flat-chested—that we protect with our work. What we do is teach people lessons on karma by fucking up their property.”

One character points out that the Romans believed whoever summoned the Furies “also ended up getting fucked over in the end.” No character in Bad Faith exemplifies that better that Aaron Kleinhardt. A series of heart-in-your-throat moments lead to a startling confrontation when Aaron becomes entangled with Amy, a young woman almost as confused and lonely as Aaron has been.

By anchoring his collection around Aaron Kleinhardt, Wheeler creates subtle connections. The stories feel linked in an understated but solid way, creating a canvas with more depth than any one short story alone could give. Wheeler’s characters are people we know. They are the people who have failed us, as well as the people we have failed. His stories are reminders that few things in this world are completely random. Not luck or grace or pain or violence. Certainly not death or karmic justice.

Denton Loving is the author of the poetry collection, Crimes Against Birds (Main Street Rag, 2014), and editor of Seeking Its Own Level, an anthology of writings about water (MotesBooks, 2014). Follow him on twitter @DentonLoving.