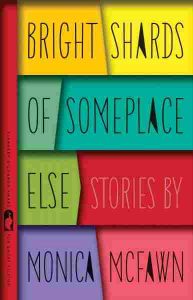 Every writer has faced the age-old question, “What makes a story?” History has provided us with plenty of satisfactory answers—in the excitement found in novelty or the resonance found in the ordinary. Monica McFawn’s short story collection Bright Shards of Someplace Else somehow encapsulates both. It features a world we simultaneously recognize and have never seen before. The collection was recently awarded the Flannery O’Connor Award for Short Fiction. Its eleven stories differ in length, in location, and in perspective. They tend to feature imperfect characters trying to solve complicated personal problems, and most of the stories take place over the span of a few hours. A much more poignant commonality between them, however, is the precision with which they are written.

A frequently irritating job of the writer is to describe fleeting, often inchoate day-to-day experiences. Bright Shards of Someplace Else is full of deftly captured moments: thoughts and feelings that we all have likely experienced but which might never have previously been expressed with such clarity. The stories in this collection, without seeming the slightest bit too long, manage to create worlds in which each passing thought or environmental detail lends itself to a greater significance. In one story, “The Slide Turned on End,” an artist asks a skeptical reporter to view the aesthetically pleasing aspect of amoebas on microscope slides. For a split second, the reporter sees and understands the beauty, and then the images shift. The artist mutters, “I know. It’s beautiful for a moment and then it’s garbage.” This capriciousness is inherent in art in many forms, including writing. McFawn’s collection manages to highlight individual moments in the instant when each is most unexplainably beautiful.

At another part of the story, a character laments that “The thing about blackness is that no one looks at it long enough; viewers assume there’s nothing to see.” McFawn takes the time to look at the moments we might dismiss as blackness—and in her stories, she notices details, in people and surroundings and thoughts, that we see but overlook: everything from the logistical complications of keeping butterflies to the beauty of mathematical proofs. From the weighted moments that change our lives to those small daily tasks we must complete. From the crucial relationships we forge with others to the irreverent thoughts we have when we’re alone. The stories are often tragic, but throughout them is also a sly dark comedy. McFawn has discussed in interviews the disparity between what we think and what we are able to communicate, and this problem plagues her characters as well. After reading this collection, you will be thankful that somebody so talented has been able to communicate such hidden, intrinsic details so clearly.

Ben Kinney is an M.A. candidate at Northern Michigan University in Marquette, Michigan, where he is dual-tracking in literature and writing. He is an associate fiction editor at Passages North. Previously, he lived in Clearwater, Florida, where he taught sixth grade language arts for four years.