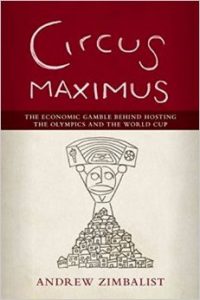 Circus Maximus: The Economic Gamble Behind Hosting the Olympics and the World Cup

In a way, everything about Andrew Zimbalist’s Circus Maximus is great. The book is thoroughly researched, thoroughly argued—hard to find a hole in its logic. And yet: how devastating. Zimbalist draws from an apparently bottomless well of examples of cities and countries who turn their well-being inside-out in an attempt to host the biggest, grandest Games—a family shoving themselves into bankruptcy by insisting their dinner party have silk napkins, a private chef, gold-speckled sundaes.

The sheer volume of information, all of it pointing to the same conclusion, is hard to argue with: a country who doesn’t already have massive stadium infrastructure in place should never attempt to host these outsized tournaments. Zimbalist frequently points to the only two financially successful tournaments in recent history—the 1984 Los Angeles Olympics and the 1992 Barcelona Olympics—because they provide such a stark contrast with the mess that every other tournament has left in its wake, its final stadium-building bill simply too large for any country to responsibly volunteer paying. There are the business atrocities, yes—the 2008 Beijing Olympics earned a tenth of what it cost&mbdash;but too frequently there are human rights atrocities on top of it: at the time the book was written, over a thousand migrant workers had died while constructing stadiums for the 2022 World Cup in Qatar.

No athletes are mentioned by name in Zimbalist’s book—unless they intersect with the politics surrounding the events: the boycott of the 1980 Moscow Olympics, or the first professionals to compete in the Games. There are no winners, no losers; no victory, no defeat and accompanying anguish. In a way this makes sense—the athletes train in solitude and then travel to the competition. They’re not responsible for deciding where the events are held, and certainly not responsible for the new-age species of abandoned “white elephant” stadiums that are left in their wake.

Which means that Circus Maximus is, in a way, almost not about sports at all. Or, I mean, it’s really about the politics of sports, that ever-shadowy industry that controls the schedule, you could say, but never actually dictates the final winners and losers. Or, what I really mean to say is: I like to watch and think about sports, the players on the field and the ways they’re assembled into teams, but my honest reflex is to bury my head in the sand when weightier issues come up. And Circus Maximus does not waste time with small talk: it is entirely about weighty issues.

Not that I wish Circus Maximus hadn’t been written of course&mdsah;not that I wish I hadn’t read it, either. Zimbalist’s writing feels appropriately urgent, and its thoroughness and finality feels like a public service. Circus Maximus leaves so few questions unanswered about the bidding and hosting of the games that I felt an increasingly obvious question being pointed back at me: Don’t I have to care about these seedy, complex, meaningful political issues? Is it my responsibility, maybe, as one of the millions who eagerly binge on Bob Costas’ regal prime-time desk-jockeying of the Games every two years?

Well, yes, but it’s awful hard to know where to start. This isn’t even a matter of writing my Congressional representative, with so much of the financing action taking place abroad. There is, at their conception, nothing inherently wrong or debilitating about the Olympics and World Cup. Although there have been frictions small and large, I think there’s a seed of nobility, sown into even the most disastrous of tournaments, that we join together as a whole globe, and to play. The dedicated Olympics-watcher can warmly put a face to almost any country in the world, no matter how small or extreme its borders. Whether the athlete wildly succeeds or nobly attempts, these events constantly transform the foreign into the familiar, nudging us a few millimeters closer to a smaller, more caring world.

I think that Zimbalist would call these gushy emotions “Feel-Good Effects,” and he dedicates an entire paragraph of the book to discussing them. Not that he’s wrong to do so: when a government financially amputates itself to pay for a few scant weeks of fantastic sports, whatever drama or intrigue those sports contain provide vanishingly little solace. But I think it’s worth remembering: those Feel-Good Effects are so intoxicating, so life-affirming, pursuing them is the only reason anybody ever wanted to build a stadium in the first place.