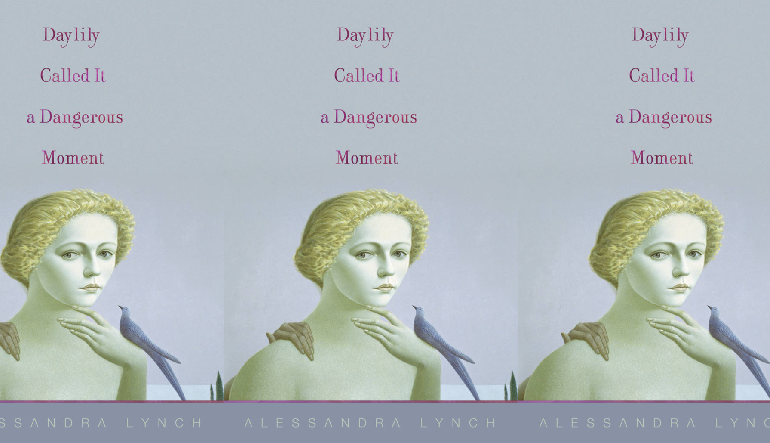 When the body wishes to speak, she will…
—Linda Hogan, “When the Body”

Alessandra Lynch’s third poetry collection, Daylily Called it a Dangerous Moment, opens with three imperatives: “Close, door. Close, petal. Human eye, you close too.” At first, this gesture reads like an ending. Subsequent poems, however, reveal these closings as a response to trauma. Following this line is the central dialectic of Lynch’s powerful book: “What more to wrestle? What else to woo?”

Pretty soon, we learn the speaker was raped in the parking lot of a bar. The image of human eyes closing suggests a desire to shut out the aftermath of fear, doubt, shame; to forget. But forgetfulness appears in the introductory lyric as “leav[ing] doors and windows open” through which pollen-druff and beetle husks, and “more gorgeous telegrams” enter. Not to mention, “The dead bits fighting in the wind drift in.” The survivor doesn’t have control over her own memory and forgetfulness—telegrams arrive, the memory persists, but it is also diffuse and thus seems impossible to pin down.

Lynch’s radiant lyricism throughout the collection expresses the post-traumatic tension of persistent remembering and forgetting. The diffuse, dead bits circulate between words through the correspondences of their sounds: us and dust, druff and husk; mud and blood, skin and him. Another: “worlds without hunting, only haunting.” So many resonant poems in this book come at angle: “Like air: memory/ Memory: like air/ I walk through and/ disappear.”

Arranged in eight sections beginning with “Excavation,” it is clear early on, that though alluring, forgetting impedes recovery. An initial, resonant image is a bone: “Let it dry—let it dry in the ditch—/ a roadside bone—innocuous./ Still, hard to reckon with.” The mesmerizing slant rhymes at once lull and discomfit—as ignoring trauma might. Hard to reckon with, the assault reappears in everyday objects—a wall is “flat as a hand pressed over a mouth” and “the gleaming nail in the door is his unseeing eye.” The open eyes see trauma everywhere. The body wishes to speak, and she will.

Still, while Lynch speaks in this collection, often explicitly about the rape, many of her poems deal with a survivor’s struggle to tell the story:

​​I gave voice
​​to what deadened the field​what ended its green
​​said the word assault, prettier than r___.

And later in the same section:

​​How had he gotten me down? Had he seized
​​​my arm or waist… I don’t remember the least.

The difficulty of remembering and the desire to use “prettier” words raises important realities about how rape victims bear witness. More than one poem comments on the internal struggle around naming: “Rape felt stripped. And spare. Brute.” As much or even more than the speaker doesn’t want to utter the word, it is easy to imagine many listeners don’t want to hear it. The most direct poems in the book are, indeed, brute. In a section titled “Another Country,” in which Lynch alludes to broader violence suffered by women and girls, the poem “clit” begins: “Someone got her clit cut/ Someone blindered her/ led her into the pit/ to keep her clit unlit.” In another poem from that section, “frida says (a translation),” Lynch writes:

Read as poetry of witness, the collection is illuminating, for trauma survivors and for those willing to behold its aftermath. Not judged by accuracy of memory, of factual truth, poetry becomes the empowered speaker that can offer testimony unwelcomed in important settings: in courtrooms and doctor’s offices; even in kitchens and living rooms. A poem can be uncertain, lyrical, or brute; it can use metaphor and music and line breaks to name its subject. Lynch uses all of these poetic modes.

In the beginning of the middle section, the speaker finds a branch that “has lost its trunk, leaving a leafy wake.” She drags it in circles, “nearly convincing [herself] recursiveness is flight.” The poems read exactly like this image: circular and obsessive. Yet, their lack of flight makes them powerful. Approached as witness, the poems do not transcend trauma, but “transmember” it. As Carolyn Forché describes this process: “one is always attending to the metamorphoses: the nausea and psychic ruin of trauma moving into wisdom and strength, again and again.”

Again and again, Lynch opens her eyes, and ours. Ultimately, she depicts rape not as something recovered from, but something that is transformed and lived with. In the final image of the book, she describes a quiet owl:

​…It is a signal—
​wanting me to know that it has never left, will
​never leave—not when I step into other rooms, not
​when I edge closer, not even when it vanishes.

Sarah Ehrich earned an MFA in poetry from Emerson College. She currently works as a writing instructor at Boston College and is Assistant to the Director at the Blacksmith House Poetry Reading Series in Harvard Square. Her poetry has been published in the Missouri Review online and Borderlands: Texas Poetry Review, and is forthcoming in JuxtaProse. Connect with her at sarahehrich.com.