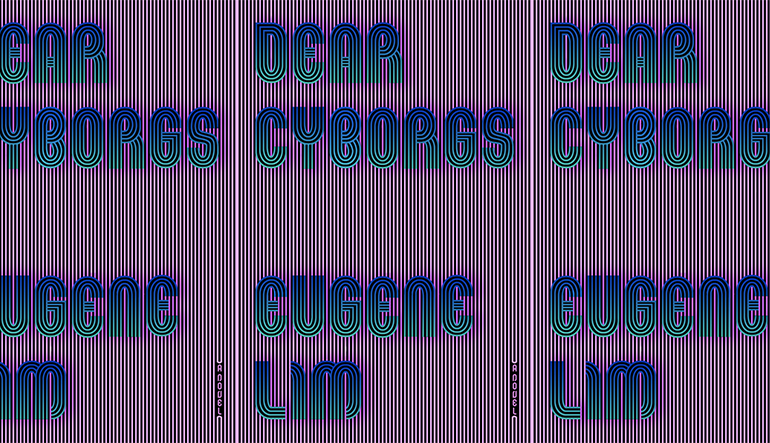 For Frank Exit, a man tasked with recovering the kidnapped children of a Japanese diplomat, gone are the days of a simple ransom request for money or a getaway vehicle. No, the ransom letter he receives makes demands for “a worldwide single-payer health care system, mandatory carbon caps, nuclear disarmament, paid yearlong parental leave, and a tax on all securities transactions.” The kidnapper, who goes by the name Ms. Mistleto, is reasonable, however. She knows such a request is a big task, so she is willing to accept “as a down payment and a token of good faith” a viable alternative: “the artist Robert Rauschenberg’s Canyon…delivered to a given set of GPS coordinates in a week’s time.”

Such is the case in one of the worlds of Dear Cyborgs, the latest novel by Eugene Lim. The novel is loosely organized into three storylines that follow a series of unsigned letters addressed to the namesake Dear Cyborgs; the story of an unnamed man and his memories of his childhood friend Vu; and the adventures of Frank Exit and friends, artists and writers who spend most of their time at karaoke bars and restaurants, but happen to have jobs as superheroes (hence the rescue operation involving a Rauschenberg combine).

Much of the book is of characters telling stories—stories of their own attempts to make art, or the failed attempts of artists and protestors that they know. The characters don’t converse with each other so much as take turns telling stories, monologues that are hardly ever interrupted. Many of the tales end with the abandonment of one’s initial cause. Artists commit suicide or destroy their work after they fail in the capitalist art world, and protestors end up working for the company they once railed against. When a speaker finishes, the listeners react with no emotion, and instead use the silence to launch into their own tales. This lack of emotion among characters illustrates the existential crises to which they give a voice, problems of effectiveness in art and protest in today’s political environment.

Parallels to the early 2000s, especially the Occupy movement, and even George W. Bush’s hobby of painting portraits, are present in this novel’s alternate world. Interspersed with the fictional histories are tales of true protestors, including an account of Kim Jin-suk, a labor activist in South Korea who lived atop a crane in 2011 to protest layoffs at a shipping company. The anxiety of that time is what dominates most of the characters’ conversations, where the only real comfort—and possible celebration—for doing any art or protest at this point is for the act itself.

In the end, Dear Cyborgs doesn’t offer any answers but provides a symphonic forum for contemporary anxieties and a kind of solace from voicing them. As the unnamed narrator says:

One becomes accepting of powerlessness, is rendered complacent and mute, but tries nonetheless to signal to other like-minded parasites, not in order to gather and foment rebellion…but simply so as to provide reflection, the mirage or actuality of company, that is, simply to make known one’s kind’s existence as a remaining possibility.

Is it possible that any form of art or protest is effective anymore?

Gallagher Lawson is the author of The Paper Man. He is a graduate of UC Riverside’s Palm Desert MFA program. He lives in Los Angeles.