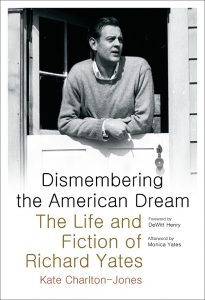 An English professor, a former colleague of mine, once admitted to me that he wasn’t much of a fan of the novelist about whom he had spent his entire career writing. I’m sure the look I gave him summed up my feelings. Really? Are you kidding? Sadly, I’ve since met other professors who’ve held similar dim views. Consequently, libraries are full of such clinical, soulless monographs written by hazmat-wearing academics decontaminating their authors. And so when Kate Charlton-Jones writes in the introduction of her book Dismembering the American Dream: The Life and Fiction of Richard Yates that it’s “an extended appreciation of Yates’s work,” I said aloud, “Thank God!”

Later, she writes, “It is my hope that this book will add to the real resurgence of interest in Richard Yates’s fiction and help to persuade those who have either dismissed it or have yet to read his stories that they have made a grave error of omission.”

Dismembering the American Dream is a revelation, not only because it’s a joy to read but because it’s that rare bird of scholarship: incisive yet accessible, enthusiastic but not blindly so–in short, a book that should appeal not only to literature professors but to discerning Richard Yates fans as well. Where Blake Bailey’s brilliant A Tragic Honesty: The Life and Work of Richard Yates is primarily a biography informed by Yates’s work, Charlton-Jones’s Dismembering the American Dream is primarily a critical study of Yates’s work informed by, among other things, his life. The strength of Charlton-Jones’s book is how well she fuses her many critical threads to show us the autobiographical influence of Yates’ work, the influence of popular culture (namely, Hollywood and the movies), the sociological implications (“theories of selfhood”), his craft (at odds with the prevailing postmodernists), and the historical contexts.

Championing Richard Yates is an uphill battle. The recurring theme of his books can be summed up with a phrase from the first chapter in Revolutionary Road: the promise of failure. Or, as Charlton-Jones puts it, “Yates picks apart his characters’ idealized versions of themselves and dismembers their dreams entirely.” But one thing many people miss–including the director of the unrelentingly bleak film adaptation of Revolutionary Road–is Yates’s sense of humor. Charlton-Jones acknowledges Yates’s humor throughout her study and, in her chapter about Yates’s portrayal of writers, writes, “Yates uses a wry, witty voice that amuses even at some of the bleakest moments.” For me, this acknowledgment is the key to understanding Yates’s worldview. If you miss his use of humor and irony, as so many do, you’ve missed Yates’s entire worldview as a writer. It would be like failing to recognize the satire in Jonathan Swift’s essay “A Modest Proposal,” which, tragically, many have also missed.

What separates Dismembering the American Dream from so many other critical studies is its lucidity, warmth, empathy, and–dare I say it?–love for its subject, in this case Richard Yates’s work. It’s a book good enough to restore your faith in scholarship.

John McNally is author of three novels, two story collections, and two books about writing. He has also edited, guest edited, or co-edited seven anthologies. His stories have appeared recently in the Sun, One Teen Story, and the award-winning anthology Shadow Show: All-New Stories in Celebration of Ray Bradbury. His first YA novel, Lord of the Ralphs, will be published in September. He is Professor and Writer in Residence at the University of Louisiana at Lafayette.