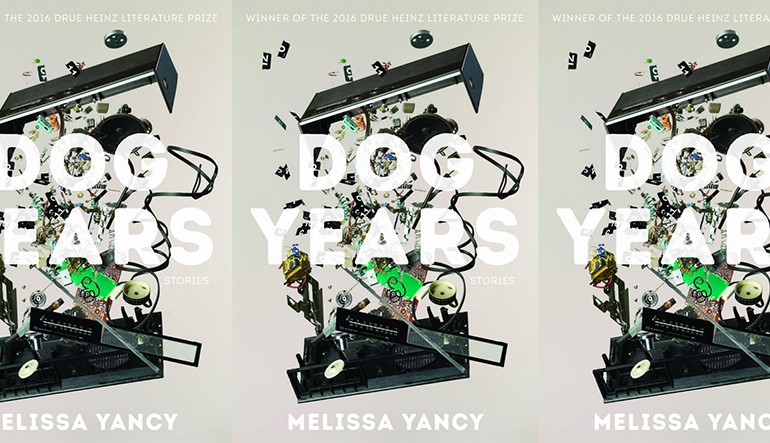 Melissa Yancy’s debut story collection, Dog Years, is an exploration into the intersection between our public and private selves. Each of the nine stories follows a central protagonist who is navigating the world, often uneasily and unsuccessfully, trying hard to figure out how to create a life with fewer disappointments. The collection was chosen by Richard Russo to receive the 2016 Drue Heinz Literature Prize.

Yancy’s strength lies in her ability to so thoroughly inhabit her characters that we come to know them better than we may know ourselves. Moments of interiority reveal truths, and they dig deep, allowing us to see the people beneath their veneers. In just a sentence or two, a story can get at the heart of a character. In “Hounds,”—a story about Jess, a woman who works for a facial reconstructive outfit—Jess thinks: “It was the sexiest dress she owned; looking at herself in the bathroom mirror, she felt like an ex-wife who had left her husband but still wanted to be wanted by him.”

The writing can be funny and sad, all in one fell swoop. In the title story, “Dog Years,” the protagonist, Ellen, thinks the following about a well-dressed woman: “She is the kind who has made enormous effort not to let herself go. Ellen was never successfully hanging on.”

One of the most poignant stories, “Consider This Case,” examines the relationship between a successful doctor and his aging father. Yancy allows us to see around the protagonist, to understand why his relationship with his father is so complicated, and yet we still remain in a close third-person point-of-view throughout the story. This is a tricky thing to accomplish—to allow us to see through the protagonist’s eyes but also to see his flaws and shortcomings, to understand what he doesn’t—and Yancy does this beautifully, in small, subtle ways.

The stories are united in their consideration of the relentless passing of time and the process of aging. Almost every character considers his or her inability to stop time. In “Firstborn,” Yancy writes:

Laurie had a tendency to let time get away. She had tried different techniques to slow its progression, but it only accelerated. She attributed this inattention in part to her greater understanding of time, her instinctive knowledge that it was not linear, anyway. She often felt her past lives folding over the present one and was reminded that she was not going from point A to point B at all.

In “Teeth Apart,” the protagonist Laura runs into an old friend at a conference and is forced to consider the person she is now: “But age has done something to her; it is as though this face has been waiting for the flesh to thin so it could reveal itself.”

Yancy has mastered the art of the perfect first line. Every story starts with a zinger, a line that pulls the reader right in and refuses to let go. At times these lines instantly attach us to a character; “Go Forth” begins: “His wife Beverly was on the mailing list for every conceivable kind of cause, cleft palates and felled trees.” Other stories move farther into the world. It’s hard to resist reading “Teeth Apart” when it begins: “Kofi Annan walks into a bar.”

But Yancy’s endings are good, too. They’re satisfying and yet never too resolute; the characters have come to an understanding of some small piece of the mess of their lives. At the end of “Dog Years,” a mother and her sons are moving slowly to music when the father returns:

When Gordy walks in, holding the pizza box aloft with one hand, his bag in the other, they are just reaching the treacly crescendo and mother and sons are standing, fists wild in the air, necks craning forward, and she has the stupid feeling for just a moment that she can feel the wind.