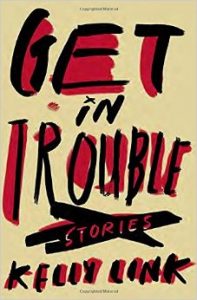 For a long time, with all due respect to the memoirists, I’ve believed that fiction holds a particular truth in literature. Maybe by removing the self from the work, and unburdening the story of actual events and dialogue and timelines, the writer can more fearlessly probe and weave and build a world that ultimately reveals a truth.

As I’ve gotten older, I’ve started to extend this theory to believe that there is a deeper level of truth revealed in fiction that takes place in an alternate reality. Some might call this science fiction or magic realism, and certainly these terms have been associated with fiction writer Kelly Link, though I’m not sure if any pre-existing term can aptly qualify her work.

Her latest book, the superb and unusual short-story collection Get in Trouble offers a view of the world that at first glance seems probable enough, if not exactly familiar. But soon each story veers into the surreal, and we find ourselves in a world peopled with superheroes, supervillains, and sidekicks, and those trying to move past the stereotype of having two shadows. There are pocket universes where you can go to get drunk and/or laid or retire in tranquility, and mermaids who have become an invasive species. The stories in Link’s collection left me with some simple and daunting conclusions that might not be achieved, or could feel melodramatic in less fantastical work—realizations along the lines of: This too shall pass, and We are all part of a mirage.

On a sentence level, Link’s are of the variety you want to write on index cards and tape on the wall. I will never cook onions again without thinking of “the thick, sweet smell of caramelized onions, onions that will never make anyone cry again” and the unspoken parallel to us humans—that until we are (metaphorically!) wilted and cooked in the frying pan, we will go on hurting each other and being hurt, sometimes just by being who we are, and especially when you cut us open.

Link’s paragraphs reveal their own truths, within the larger framework of the story’s discovery. In “Secret Identity,” the (almost) 16 year-old narrator tells her thirty-four-year-old would-be lover (whom she “met” online at FarAway) about advice from her sister:

“She says wait a few years and see. Things will get better. Of course, based on her life, maybe they do get better. And then they get worse again, and then you have to move back home and teach high school. So how exactly is that better?”

Who among us wants to admit that, yes, this is how it sometimes goes? Every time we hit another low, don’t we think that things will get better? Or is this just something we tell ourselves—voicing our own persistent hope?

Link has her finger on the pulse of things that I didn’t even know were happening, worlds I haven’t yet imagined. The story “Two Houses,” which she credits as inspired by the work of Ray Bradbury, is one of the most profoundly haunting stories I have ever read. Set in the future on the spaceship House of Secrets, the inhabitants amuse themselves at a birthday party by telling ghost stories, which become darker and twist with the present setting when the operating system named Maureen becomes active in the telling rather than just reactive, and the story turns on its head and becomes a ghost story in its own right.

In the end, the thread of superheroes that weaves through many of her stories, either directly or metaphorically, rings true—we are all sometimes sidekicks in our own stories, until the day when things change and we become superheroes or supervillains, and ironically, sometimes both.

Jennifer Kircher Carr is a fiction writer living in western New York. Her fiction has been published in numerous literary journals, including the North American Review, Prairie Schooner, Alaska Quarterly, and The Nebraska Review, where it also won the Fiction Prize. Her non-fiction has been published in Martha Stewart’s Body + Soul magazine, Edible Finger Lakes, and Poets & Writers, among others. She is currently working on a novel in stories.