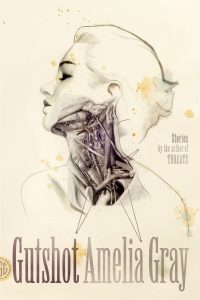 If Amelia Gray’s collection, Gutshot, was choreography, it would be comprised of violent, animalistic phrases: bodies smashing into each other and hands clawing into skin. But on the page, these assembled short stories use a vocabulary of the body to examine the manifestation of humanity’s deepest fears and darkest impulses. In this smart, irreverent collection, Gray’s language growls, hungrily; her characters express yearnings that can’t be satisfied through ordinary human interaction.

Gray’s characters recruit others into their fantasies to satisfy their own lust. In “House Heart,” a couple hires a girl and imprisons her in the air ducts of their home. “Fifty Ways to Eat Your Lover,” originally published in McSweeney’s, is a progressively grim meditation on how love consumes. “When he says goodbye,” Gray says, “eat his heart out.” “The Moment of Conception,” which follows “Fifty Ways” echoes its sentiments of two lovers becoming one, and pushes the boundary between metaphor and imagination. Gray’s impulse is to probe into difficult images. She wields discomfort like a narrative weapon.

Gutshot’s careful awareness of physicality also shows in the tenderness of its characters. In “Monument,” an older woman warns a young girl whose head is turned by the easy compliment of men on the bus:

“Attention is the most worthless currency on the planet,” she says.
“When you treat it like it’s precious, you’re blinding yourself to the possibility that you might find it elsewhere. And it’s everywhere, attention is. […] I’m saying you may as well assign a high value to yourself. You should consider all angles. His attention is a penny placed upon a monument. Give the monument your prayers, not the coin.”

The two women become entangled; their point of connection is the attention they both need but won’t allow from men. Gray considers the corporeal form with both frankness and delicacy. In Gutshot, characters are thrown into situations that acknowledge their bodies’ vulnerability and fortitude.

Gray writes with wit; much of the pleasure of reading her surreal stories is found in their clever images. In “The Lives of Ghosts,” Marcy’s mother haunts her as a pimple on her face. “I’LL TRY TO CONTAIN MYSELF,” her mother says. (Pimples speak in all caps.) “[T]hough in truth her mother did seem subcutaneous in the way that could ache for weeks without coming to a head.” But Gray is quick to undermine the idea of simple metaphorical correlation. “The Swan as Metaphor for Love” shows defies stereotypical ideas about what a swan might mean by showing swans (and thus, love) for their realistic, grimy reality.

“Every problem in the world can be traced to attention or its lack,” a character says in “Loop.” In Gutshot, Amelia Gray’s grotesques furnish a view of humanity that is dark and filled with a desire to live. Gray challenges us to decide whether to live is to burn or to imprison, to feed or to cut. These are characters whose wants overtake even their best intentions. In allowing them the freedom to abuse each other, Gray leaves her reader with an impression of humanity that is gritty, bleeding, and spent.

Heather Scott Partington is a writer, teacher, and book critic. She lives in Elk Grove, California with her husband and two kids.