Home
»
Book Reviews
»
Fiction
»
Review: HOW TO SURVIVE A SUMMER by Nick White 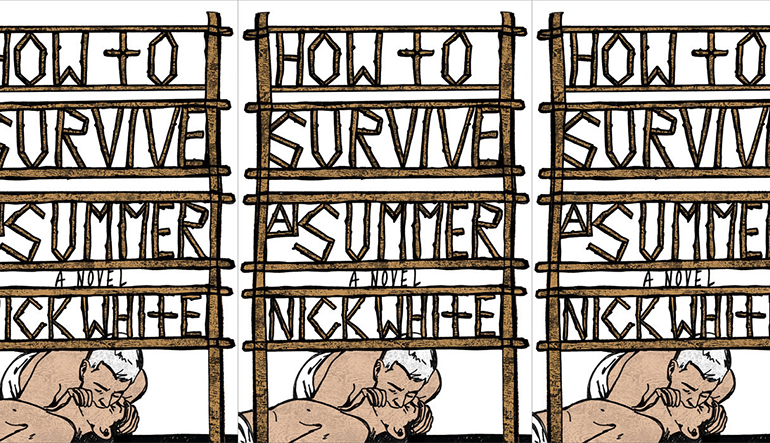 One might be tempted to call Nick White’s novel How to Survive a Summer a gay coming of age story, but it’s so much more than that. White’s book explores the intersection of southern culture where sexuality identity clashes with religious ideals. The novel takes on our desire to fit in and the dangerous complicity that can result.

The story opens with Will Dillard, a graduate student in Ohio, overhearing the familiar voice of Mother Maude on a trailer for the film Proud Flesh, “her voice infecting the air.” Dillard’s visceral reaction comes from the fact that Mother Maude, his aunt, ran a gay conversion camp called Camp Levi that Dillard attended when he was fifteen. A fellow camper has turned the experience into a slasher movie and Will is forced to reckon with his experience at Camp Levi, including the role he played in the death of a fellow camper.

Watching the film spurs Will to return to Mississippi and visit the ground that was once Camp Levi. As he makes the journey, Will recounts his upbringing with his loving mother Debra, who dies when he is still relatively young, and his father, a racially-sensitive but gay-phobic reverend, who called Will “Rooster” in an attempt to ramp up Will’s masculinity.

In spite of his father’s efforts, Will’s true nature emerges. Will gyrates in church, imitating the heroine of the movie Written on the Wind.  His father scolds him and later strikes him. In an act of solidarity and love, Will’s mother reveals that her brother was also gay by saying, “Johnny had a flare, nugget. Like you do.” She shows Will the tiara she wore as homecoming queen. When Will puts it on his head she caresses his face and says “There he is Mister Mississippi.”

White’s insight and humor comes across most vividly in a scene where young Will masturbates and experiences so much pleasure that he blacks out.

Later I’d wonder if other people—grown-ups who had jobs and lived in the world—knew such a thing on the body existed, If they did, how were they able to do anything else but this? When I did it again and again, I began to believe I was touching something more ephemeral than organ, the very essence of my existence, that part of a person you call a soul.

In the second half of the book, White deftly alternates between Will’s memories of camp and his present day experiences in chapters that evoke the conversion experience—orientation, reorientation, treatment, rehabilitation, and release.

The scenes at the camp are southern gothic, the boys are forced to recite I am nothing I am no one God rend my flesh burn me anew, baptized in a polluted lake that leaves them covered in lesions, and sent to solitary confinement in the sweat shack. They play games of Smear the Queer, tackling each other until they inflicted pain. Will observed:

We were no longer driven by our hatred of Dale. He didn’t even matter. As we bashed ourselves against him, we were only damaging our own bodies, a kind of self-hate that was somehow honorable. I wanted to keep going.

In the strange confines of the camp, the boys attempt compliance, forcing Dale into the lake to be baptized. Later they plan an escape, but one of the boys betrays the plan and Dale ends up fatally injured.

In his journey back to the camp, Will encounters his fellow campers, now grown men, each of whom have carved out a life for themselves in spite of the tragedy. He connects with his estranged father, who is now married to a black woman and has a child. He comes face to face with Father Drake, who is hanging around the site of the camp with an underage boy.

As Will confronts Father Drake he relives the memory of the camper who died and grapples with his own complicity in the camper’s death. Will chooses between exacting revenge or coming to a new understanding of forgiveness and self-acceptance.

White’s telling of this tale is unique in that it is free of condemnation. He clearly loves this region with all its faults and draws nuanced portraits of its flawed inhabitants as they try to make sense of the world.

Tags:Blue Rider Press, How to Survive a Summer, nick white