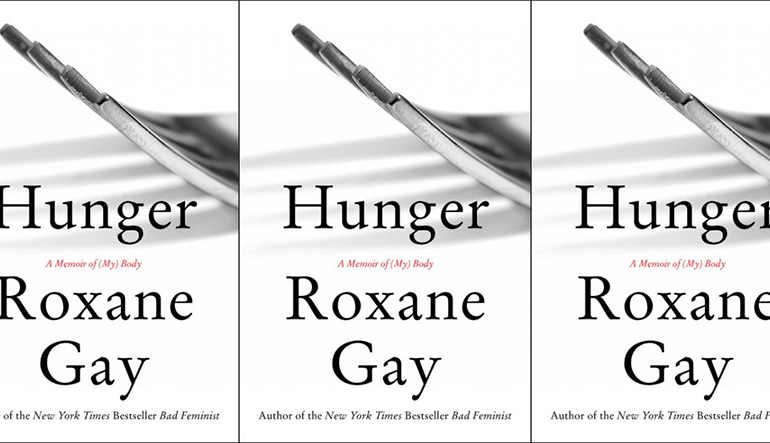 Roxane Gay is America’s favorite bad feminist. She is often read as a black feminist, but her Haitian roots rarely get more than a passing mention. US-based audiences know so little of Haiti—other than earthquake or poor—few people associate Haiti with Gay’s razor wit and unaccented American voice. Yet Haiti is the unseen backdrop to Gay’s memoir Hunger: a fierce, black, female, fat narrative.

Haitians successfully overthrew slavery in 1803. In response, France deployed warships, demanding compensation for loss of kidnapped African bodies and stolen Indigenous land. Haiti paid France the modern equivalent of $21 billion. Europe and the US shunned the newly freed nation. To this day, Haiti remains the poorest, blackest, and most isolated Caribbean country.

The daughter of Haitian immigrants, Roxane Gay’s memoir reveals how her relationship with her body was brutally altered as a child. In her “well-manicured exclusive suburban neighborhood” a group of boys from “good families” gang raped her when she was twelve.

She claims the label of victim as well as survivor, not wanting to underplay the violence she endured. After the assault, food offered solace, and fat offered protection. Throughout the narrative, Gay painfully struggles to resist internalizing many layers of victim-blaming as a fat, black woman: blame for the eating behaviors she developed to cope with sexual trauma, blame for gaining weight, blame for struggles around physical health, blame for mistreatment she endures in a fatphobic culture that sabotages her at every turn, and the original blame for the rape itself.

In the logic of internalized misogyny and sin, the twelve-year-old rape victim uses her history of consenting to sexual activity with one boy as evidence that she deserved to be assaulted by him and other boys, even though she said no in the latter case. Yet her narrative is utterly clear that her profound isolation and loneliness is what drew her into the relationship with that single exploitative boy in the first place. She is blameless. I would insist that not only was it the fault of the boys—the rapists—but it was also the fault of the racist context. Gay describes herself as “awkward” and “lonely,” but I suspect she could be personalizing some of the manifestations of racism and xenophobia that she encountered as a Nebraskan child of the African diaspora, (statewide black population less than 5%). The Haitian daughter grew up in the US, already both rejected and targeted before she had even opened her mouth.

Yet Hunger is a triumph. Not only does Roxane Gay survive, but she develops an American audience that does the previously unthinkable: listens and develops empathy for a fat black woman’s story. I believe that Gay’s memoir is not only an invitation for US audiences to see black women and fat differently, but also to see Haiti differently, as an epicenter of Black Power and resistance, spiritual force and intellectual capability, a victim and a survivor nation, and to celebrate Gay and her memoir, as an heir to that lineage and legacy.

Aya de Leon teaches creative writing at UC Berkeley. Kensington Books published her debut feminist heist novel, Uptown Thief in 2016, which won first place in both the Independent Publishers awards and the International Latino Book Awards. The Justice Hustlers series continues with The Boss in 2017 and The Accidental Mistress in 2018. Her work has appeared in Ebony Magazine, Guernica, Writers Digest, The Toast, Bitch Magazine, VICE, Huffington Post and on Def Poetry. She blogs and tweets about culture, gender, and race at @AyadeLeon and ayadeleon.com. She is also at work on a picture book to help talk to kids about racism and just finished a YA black girl spy novel called Going Dark.