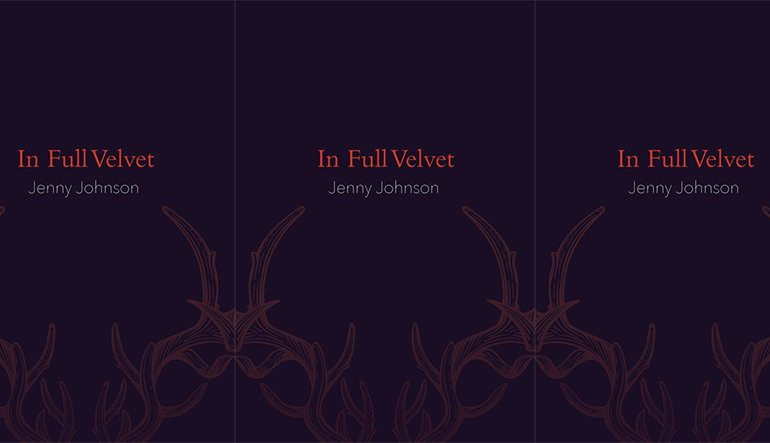 The trope with invoking the muses is that it is always a request. Whether it is pleading or demanding, pedantic or indignant, the epic tale is something owed. For her debut collection In Full Velvet, poet Jenny Johnson’s address begins with “Thank you,” and it is radical, as if a muse might peer over the edge of her throne and say, “My, those are words I have not heard for some time.”

“Dappled Things” spans eight pages, each with two stanzas. In a meditation too specific to be anything but genuine, Johnson names gratitude for everything that is “still somehow / counter, original, spare, and strange,” like “the alien markings on my girlfriend’s cheek and how / they form a perfect triangle.” She comments on the weirdness of “[generating] a realm / where we can always see, never see” and the optimism that remains relentless despite all: “Where’s Hope? Hope’s a weed, obscene / on my head, springing white hairs.”

When Johnson does ask for something, it is from herself, rather than the universe. With “Summoning the Body That Is Mine When I Shut My Eyes,” she employs the oddities of nature to remind her that she is here now, sentient and present:

Each image has a sense tied to it, perhaps with the hope that conjuring these things can remind what a privilege it is to witness them.

The title poem, as the cover implies, explores the vascular skin that grows on deer antlers during their development. Here, again, is a fascination with the body: “Gut a body and we’re nothing left but pipes whistling in the breeze.” Johnson describes watching a scientist severing the wing of a cassowary (“Because it made me want to turn away”) and quotes a taxidermist giving instructions about deer:

Now we’re going to put a puncture in the tip.
So, we’re not just hitting the one vein.

That’s what we want to see.

It is gruesome but Johnson is reaching for something, trying to understand the oddity of being alive. “Love, we are more than utility, I think,” she writes, and it is both a declaration and a question. “I know my body’s here,” she writes, “when the turkey vulture comes out of the thicket, wings spread wide, smelling all of it.”

However, it would be wrong to categorize this book as a collection of “nature poems,” as it were. “The Bus Ride” is Johnson’s joy of looking at her girlfriend as the light comes through the window, making her glow. “In The Dream” is the transcription of a nightmare that begins with her “alone in a dyke bar.”

In “Souvenirs,” the last stanza is about an ex-girlfriend calling years after a bad breakup. Now living a thousand miles apart, the ex-girlfriend asks Johnson’s permission to build a model of her new home. The ex-girlfriend is a sculptor and wants to use sugar cubes but does not know the measurements. Johnson does the work with grace:

I cannot explain my consent
that evening, alone, at home,
the yellow tape unspooling, I measured closet widths,
calculated the feet between hedges—
I wanted her to craft it perfectly to scale.

If In Full Velvet is a map of Johnson’s mind and memory, it is one worth saving. Johnson is precise with herself, patient with others. These poems celebrate the feeling of spinning in tight circles until all that is left the spiral, rushing from the inside out.

Annalia Luna is currently the shipping & returns manager at Brazos Bookstore, & a contributor at HTML Giant. She earned her B.A. in Literature & Music from Butler University. Her work has been published or is forthcoming at The Rumpus, Ploughshares, Literary Hub, & Heavy Feather Review. She lives & writes in Houston, TX