Home
»
Book Reviews
»
Nonfiction
»
Review: IRRESISTIBLE: THE RISE OF ADDICTIVE TECHNOLOGY AND THE BUSINESS OF KEEPING US HOOKED by Adam Alter 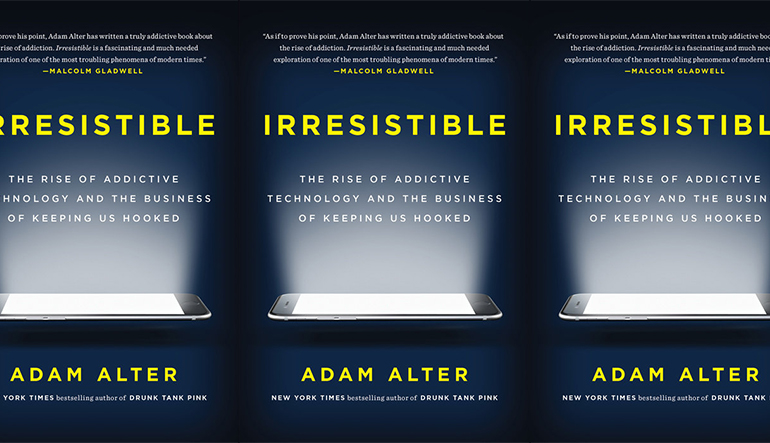 Irresistible: The Rise of Addictive Technology and the Business of Keeping Us Hooked
Adam Alter
Penguin Press, March 2017
368 pp; $27

According to Adam Alter in Irresistible: The Rise of Addictive Technology and the Business of Keeping Us Hooked, 70 percent of office emails are read within six seconds of arrival. The pleasing (or in some cases, annoying) ding of a new email notification, the strong bold type of an unread email, all of this is designed to make us click and click fast. Some may want to rationalize this attentiveness as being “present,” but Alter goes on to cite one estimate that it takes nearly half an hour to fully re-engage in the interrupted task.

Alter is a professor of marketing at New York University. He has written one other book, the New York Times bestseller Drunk Tank Pink, which explores how environment influences our choices. Irresistible, published this past spring, is a study of how contemporary technology uses sophisticated means to draw out a mostly primitive trait in humans: addiction.

He opens Irresistible with some juicy anecdotes. How Steve Jobs wouldn’t let his kids use an iPad. How Evan Williams, a cofounder of Twitter, won’t either. How an editor for the technology magazine Wired severely limits his kids’ screen times “because we have seen the dangers of technology firsthand.”

Alter’s book sets out to show how behavioral addictions related to technology are no different than substance addictions, how despite the user’s desire to change this behavior, too often the immediate pleasure derived from a click or a refresh wins out over long-term dissatisfaction. He likens the dopamine release of a new “like” social media to that of a fix, essentially.

His thesis is that tech companies know these things, and design their products and platforms to trigger addictions in users—whether the bottomless stream of content on Facebook, or the metrics of social media where users strive for approval, or the constant attention required of games like FarmVille and World of Warcraft.

He offers solutions to the problems technology poses going forward. He talks about creating a “behavioral architecture” that limits exposure to screen times and technology, including avoiding tempting situations. He advises “demetricating” social media, showing how users engage with platforms much more responsibly when measurements read “users like this” rather than “155 users like this.” He cites examples of companies shutting down email from 9 p.m. to 5 a.m. He knows ridding our lives of these devices and platforms isn’t realistic, or a net benefit even, but there are ways to control its problematic effects.

Irresistible uses a broad range of psychological studies to support and explain its conclusions. In some ways the book reminds me of those Psych 101 textbooks that have made plenty of us consider becoming a Psych major at one time or another. Interesting studies cited in Irresistible include a language empowerment study that showed using “I don’t” is much more effective combatting habit formation than “I can’t”; a study on awareness where subjects wore Barry Manilow t-shirts into a crowded room, and were asked to estimate what percentage in the room noticed their shirt (the subjects’ estimates were much higher than the actual); and two sets of strangers having a conversation, one set in a room with an idle smartphone on a table just out of reach, the other set in a room with a blank notepad there instead. The set with the idle smartphone was able to recall much less of the conversation and also displayed much less empathy toward their interlocutor.

Irresistible presents a lot of useful information for understanding how technology is shaping our world and our behavior. With how fast technology is moving, the smartphones and social media platforms we know today could be distant concerns in the near future. Virtual Reality (VR) gets some tangential mentions throughout the book. The power of VR, both positive and negative, really seems to be the next big wave in how we will talk about technology and how it will impact our living experience.

John Moss is a proposal writer for a Fortune 500 company in Chicago. His writing has appeared in various publications, including Crab Orchard Review, the Journal Star, and Chicago’s Newcity magazine.

Tags:Adam Alter, Irresistible, Penguin Press, The Rise of Addictive Technology and the Business of Keeping Us Hooked